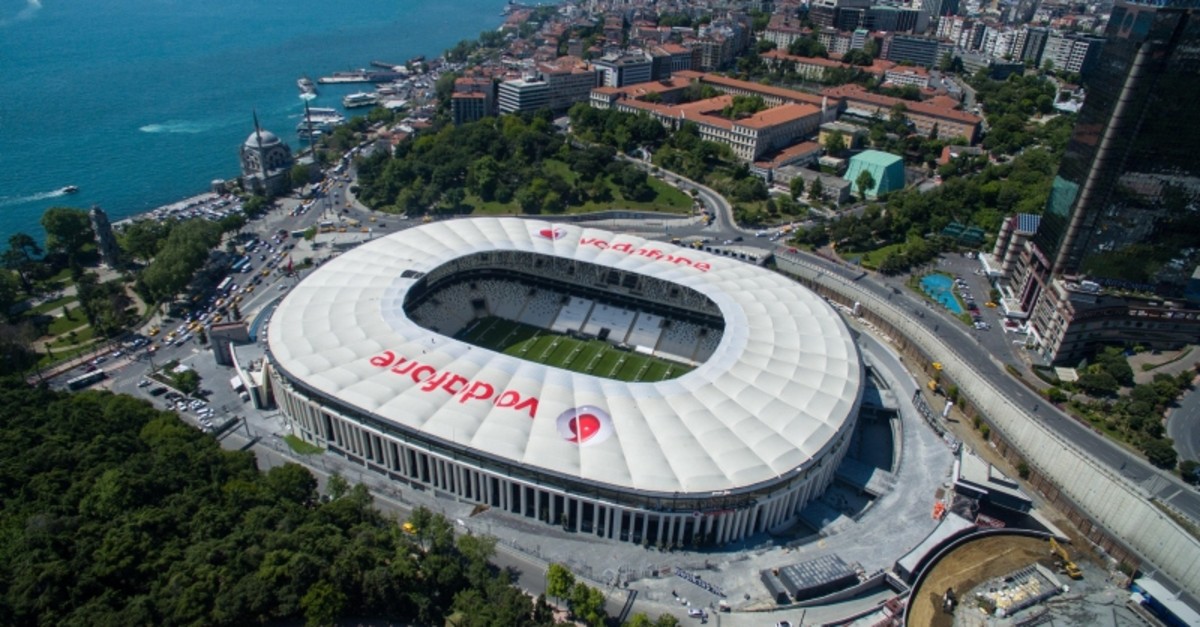 With the UEFA Champions League and Europa League finals concluded, Istanbul has now set its sights on the first all-English Super Cup match scheduled for August and some 50,000 spectators, mostly English fans, expected to visit the city for the occasion.

Liverpool, emerging victorious from Saturday's Champions League final against Tottenham Hotspur, and Chelsea, dazzling London rival Arsenal in Thursday's Europa League final, will face each other on Aug. 14 in the renowned Vodafone Park, which serves as the home ground of Istanbul giants Beşiktaş. The state-of-the-art stadium by the Bosporus was inaugurated in April 2016 with a capacity of nearly 42,000 and replaced the old stadium named after Turkey's second president Ismet Inönü that served Istanbulites between 1947 and 2013.

The first all-English UEFA Super Cup match will bring an end to Spain's dominance over the trophy after being the home of the last five winners.

The match is expected to contribute as much as 100 million euros to the city's economy, with airliners expecting more sales in flights from Britain while hoteliers expect a 100% percent occupancy rate in the already-crowded season.

Fans have already started booking tickets for scheduled flights offered by flag-carrier Turkish Airlines and budget airline Pegasus from Manchester and London to Istanbul Airport and Sabiha Gökçen, in addition to flights offered by foreign airliners. Additional charter flights will also be introduced near the date of the match.

Since the match coincides with the last day of the 4-day Muslim holiday Qurban Bayram, also known as Eid al-Adha, Istanbul airports are expected to break flight and passenger records on Aug. 14.

Fans have also begun booking rooms in hotels with many making reservations for at least two days and prolonging their stay until the weekend. Tourism agencies said interest in package tour programs based on the Super Cup match has also increased. Prices for two-night accommodations and tours in the city start from 300 pounds – excluding match and plane tickets.

British tourists are generally known for their love of traveling for football and visit the cities where the matches are held and experience the thrill in that atmosphere even though they do not have tickets for the game.

In addition to fans, hundreds of employees from media outlets around the world and the UEFA, and guests sponsor companies will also arrive in Istanbul for the match.

Speaking to Demirören News Agency (DHA), Istanbul Tourism Association (ISTTA) Chairman Halil Korkmaz stated that Istanbul is always prepared for such events since the city has an existing capacity of hosting 20 million visitors per year. Istanbul is ranked among the 10 most visited cities in the world with 10.7 million visitors in 2017.

Korkmaz said that football enthusiasts from various countries will also be in Istanbul for the match and to enjoy the atmosphere, with the number of visitors associated with the match expected to be over 50,000. He called on authorities to allocate large squares as fan zones and create open-air match screening areas.

The Hotel Association of Turkey (TÜROB) also warned all airlines, especially Turkish Airlines, to avoid an insufficient number of flights.

Istanbul is very familiar to English fans, especially for Liverpudlians who clinched their last Champions League title at the city's Atatürk Olympic Stadium on May 25, 2005. Dubbed the "Miracle of Istanbul," the match saw Liverpool, behind three goals against Italy's AC Milan in the first half, equalizing the score in the second half and winning their fifth Champions League title 3–2 on penalties. Liverpool also defeated CSKA Moscow in the Super Cup match the same year, winning its third title after 1977 and 2001.

In a recent survey, the National Cyber Security Center revealed that 75,000 out of 1.5 million supporters living in Merseyside set their passwords in their social media accounts as Istanbul 2005.

About 60,000 fans came to Istanbul in the historic final match between Liverpool and Milan. Istanbul's two airports Atatürk, which no longer serves commercial flights as of April 6 after all operations were transferred to the new mega Istanbul Airport, and Sabiha Gökçen Airport in the city's Anatolian side.

The next year, Beşiktaş, the hosts of the August match, also upset Liverpool 2-1 at Atatürk Olympic Stadium on Oct. 24. However, Liverpool's revenge was brutal: their 8-0 win at Anfield on Nov. 6 marked the biggest win in Champions League history until Real Madrid defeated Sweden's Malmö 8-0 in August 2015. The two sides met again in the Europa League Round of 32 in Feb. 2015 with Beşiktaş knocking Liverpool out of the tournament 5-4 on penalties after the full time score stood at 1-1 on aggregate.

Liverpool's first visit to Turkey was in 1976, when the UEFA Cup title holders were stunned 1-0 by Trabzonspor on Oct. 20 in the second round of the Champions League predecessor the European Cup, but they managed to win 3-0 at Anfield, claiming their first title in Europe's top club tournament at the end of the season. The two sides met in Aug. 2010 for the Europa League playoffs with Liverpool advancing to the next round with 1-0 and 2-1 victories.

Chelsea's first visit to Istanbul was on Oct. 20 1999 when it defeated Galatasaray 5-0 at the former Ali Sami Yen Stadium. Initially upset by the result, the Yellow-Reds were knocked out of the Champions League group stage but went on to win the UEFA Cup that season, bringing the first-ever international cup to Turkey in football after a win against Arsenal in the final and eliminating Leeds United in the eventful semi-final.

The Blues suffered a 2-0 defeat from Beşiktaş in the Champions League group stage in October 2003 in their home ground Stamford Bridge, but could not revisit Istanbul over an appeal to the UEFA on security concerns, with the return game played in Germany's Gelsenkirchen, which ended 2-0 in Chelsea's favor.

In 2008, Chelsea was the opponent of Fenerbahçe in the Champions League quarterfinals. Suffering a 2-1 defeat at Ülker Şükrü Saraçoğlu Stadium in Kadıköy, The Blues advanced to the next round with a 2-0 win, eliminating Liverpool in the semis but losing to Manchester United in the final.

The 1-1 draw against Galatasaray in Feb. 2014 in the Champions League Round of 16 was Chelsea's last visit to Istanbul, where they won 2-0 at home and advanced to the quarterfinals.

The link between Istanbul and the top European competitions doesn't stop here. Istanbul is also the host city of the Champions League Final in the 2019-20 season, which will be played at Atatürk Olympic Stadium. The match will be contested on Saturday, May 30, 2020. The stadium has a capacity of over 76,000.

First opened in 2002, it is the biggest stadium in the country and is home to the Turkish national team, as well as serving as a temporary venue for the likes of Galatasaray, Beşiktaş, Başakşehir and Kasımpaşa.