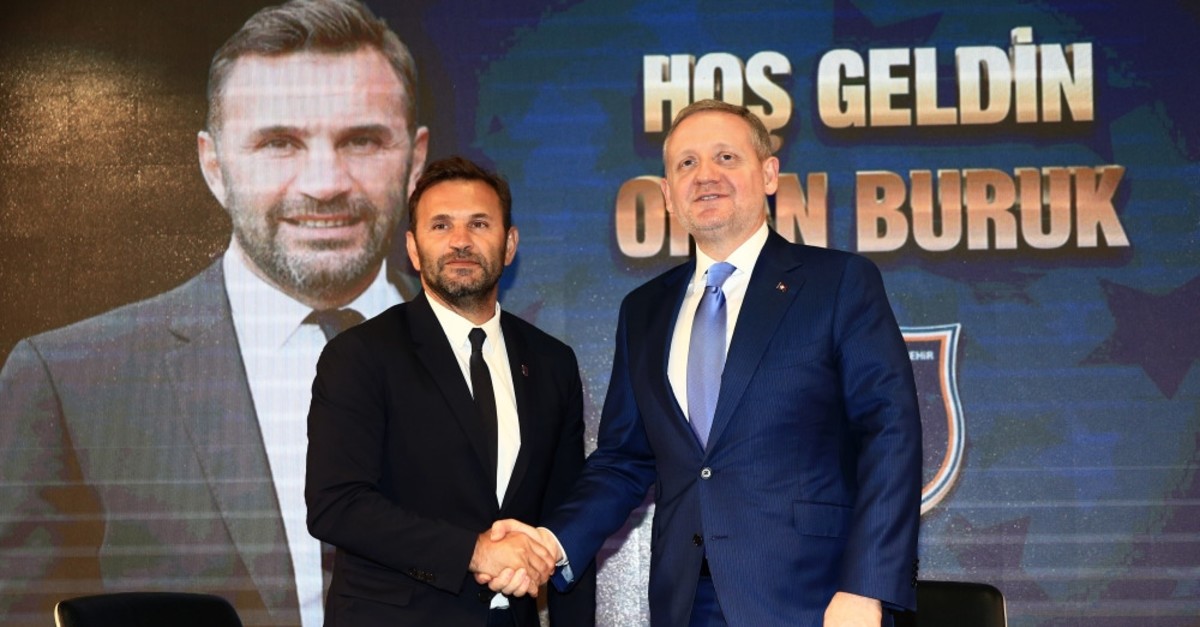 Süper Lig runner-up Medipol Başakşehir has appointed Okan Buruk as its new coach and parted ways with Emmanuel Adebayor, Serdar Taşçı and Riad Bajic in a reshuffle after an unfortunate end to their season

Looking to recover from the late slipup that cost it the league title last season, Medipol Başakşehir appointed Tuesday Okan Buruk as its new head coach.

Buruk will be expected to lead Başakşehir to its first title in the upcoming season with a new lineup. The club announced yesterday that it was parting ways with Togolese striker Emanuel Adebayor, defender Serdar Taşçı and Bosnian forward Riad Bajic.

The 46-year-old left Çaykur Rizespor, who finished 11th, at the end of the season but is no stranger to Başakşehir. A fixture in Galatasaray for 10 years between 1991 and 2001 as a midfielder, Buruk ended his playing career with Başakşehir, then known as İstanbul Büyükşehir Belediyespor in 2010 after a two-year tenure with the team, following stints with Inter, Beşiktaş and Galatasaray. He also earned 56 caps for the national team. He launched his coaching career as an assistant coach before tenures with Göztepe, Akhisar, Sivasspor, Gaziantepspor, Elazığspor and finally with Çaykur Rizespor.

Buruk has signed a two-year deal with Başakşehir, confirmed club President Göksel Gümüşdağ, who added they had full confidence in Buruk.

"Like his career, Başakşehir follows an upward trend in terms of performance. We are pushing for the top title and always raised the bar in the past five years. We have been hungry for the title for five years and I believe Buruk will bring it to the club," Gümüşdağ told reporters after describing Buruk as a longtime friend. Gümüşdağ also spoke about the upcoming season and transfer window, dismissing some of the transfer rumors circulating in the media. "There has been news in the past month that the entire team would be reshuffled. This is incorrect. We don't plan to loan or send off any players other than those whose contracts expired," he said, adding that they did not consider renewing contracts with Adebayor, Bajic and Taşçı.

The former Arsenal star Adebayor joined Başakşehir in the 2016-17 season. The 35-year-old player quickly made a name for himself with 16 goals and seven assists in his first season and continued his steady scoring performance into the next season. Yet, his lackluster performance in the 2018-19 season disappointed the club. Adebayor scored only four goals and made two assists in the 24 matches he played. He was linked to Galatasaray and Fenerbahçe by local media as the transfer window opens for the summer.

The 25-year-old forward Riad Bajic launched his Turkey career in 2015 with Konyaspor. Nicknamed the "left-footed wonder," he switched to Italian outfit Udinese in 2017 before joining Başakşehir on loan earlier this season. Local media reported that he would join Konyaspor again after leaving Başakşehir.

German-born defender Serdar Taşçı joined Başakşehir in the January transfer window from Spartak Moskva but failed to find much playing time in the second half of the season.

Medipol Başakşehir earlier announced that they sealed a three-year deal with Australian left-back Aziz Behich from Eredivisie side PSV, where he failed to find playing time throughout the season after he joined the Dutch side from Süper Lig outfit Bursaspor. He will accompany former Manchester City defender Gael Clichy in the left-back position for Başakşehir.

Speaking at a signing ceremony, Buruk said their ambition was high and he was happy to work for a club with ideals. He said he would keep the current lineup intact more or less but would also seek new transfers. "Our first target is the Champions League," Buruk said. He said the club never considered "downsizing" after losing the top title and they had goals like they had in the previous years. "I am in Başakşehir because it is ambitious and I feel ready to join its race to the top," said Buruk.