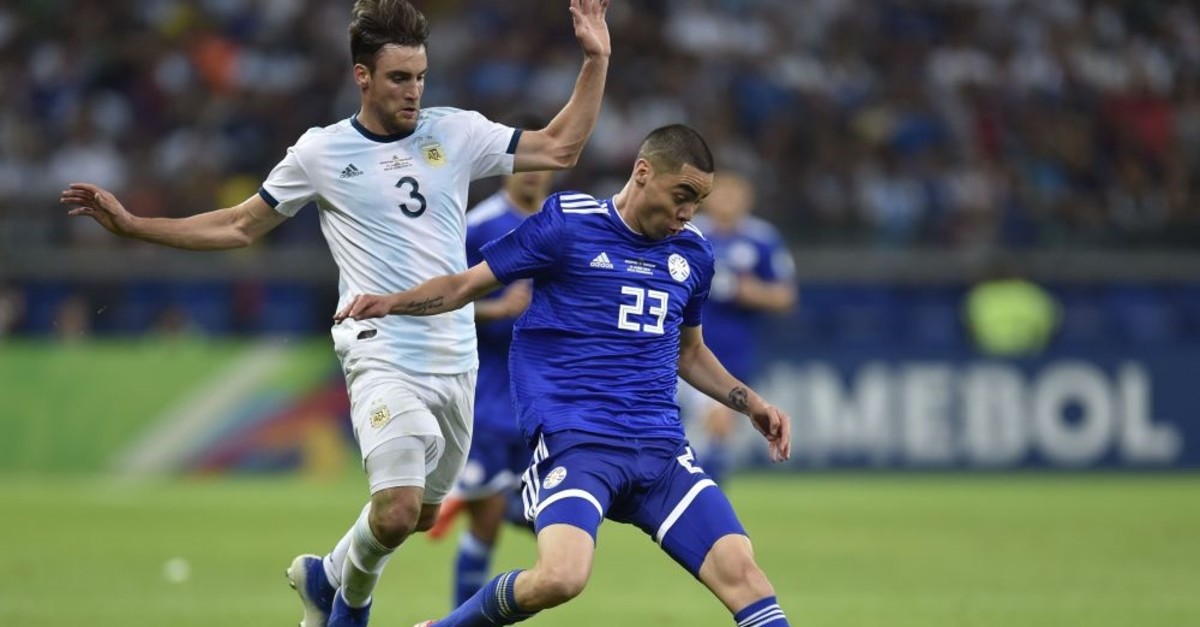 Despite another shaky performance in the Copa America, Argentina still have their fate in their hands to reach the quarter-finals after drawing 1-1 with Paraguay on Wednesday as fortune shined on their side three times.

Argentina captain Lionel Messi pulled his side level in the 57th minute after a handball by Paraguay's Ivan Peris which no-one on the pitch appealed for but was spotted by a VAR review.

Richard Sanchez had given Paraguay the lead in the 37th minute, firing into the bottom corner after a lung-bursting run from Miguel Almiron down the left wing. Paraguay were awarded a spot-kick of their own a few minutes later but Derlis Gonzalez's shot was saved by Argentina keeper Franco Armani, who was lucky to avoid a red card when he fouled Gonzalez outside his area at the end of the first half.

Argentina are still bottom of Group B with one point from two games but they could progress to the last eight with a win over third-placed Qatar in their final group game on Sunday.

Anything less than victory against the Asian Cup winners will send Argentina out and further prolong Messi's long wait to win a trophy with his country.

The result ensured Colombia clinched top spot in the group on six points after they beat Qatar 1-0 earlier on.

Paraguay, who also threw away the lead to draw 2-2 with Qatar in their first game, are second on two points and need to beat Colombia to be guaranteed a spot in the quarter-finals.

Argentina's caretaker coach Lionel Scaloni admitted his side had not played well and struggled to cope with the shock of conceding the first goal. "Our first half was not good, we played with desperation at times and we couldn't control the play or create attacks. We had a very clear plan but couldn't execute it as we kept losing the ball," he told reporters. "They scored with their first attack and that caused us a lot of uncertainty. For a team like Argentina, which feels like it always has to win, the first blow is hard to take, but we assured the players at halftime that it was just one goal."

Argentina's best move came when substitute Aguero chested down a cross and laid it off to Lautaro Martinez who hit the crossbar on the volley. The ball fell to Messi but the captain's shot was tipped away by Paraguay keeper Roberto Fernandez.

Messi was preparing to take the resulting corner when the referee went to consult the screen and then ruled that Martinez's shot had struck the outstretched hand of Peris. The Barcelona forward, who is playing at his eighth major tournament with Argentina and has already lost four major finals, blasted in from the spot but an awfully timed tackle by Nicolas Otamendi threatened to undo his good work. Yet Argentina enjoyed a third slice of good fortune as Armani came to the rescue by punching Gonzalez's spot-kick away, and the River Plate goalkeeper also saved a later free kick from Matias Rojas.