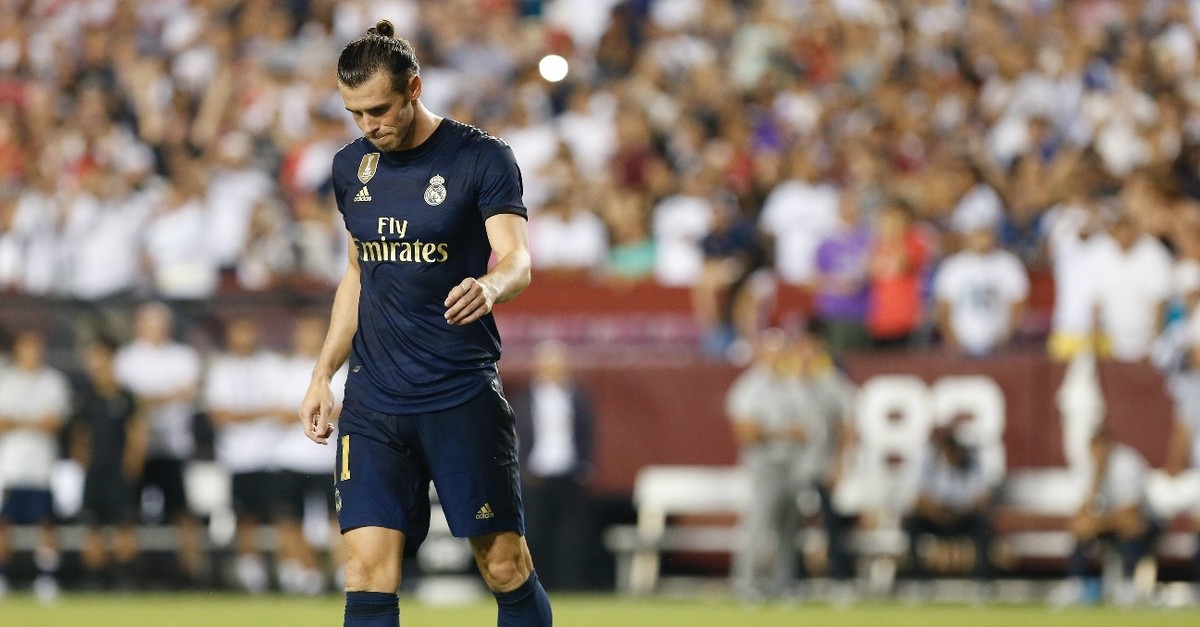 Despite his dispute with Real Madrid coach Zinadine Zidan, Welsh footballer Gareth Bale scored at a friendly against Arsenal. His future in the team still remains unclear

Gareth Bale shrugged off uncertainty over his Real Madrid future Tuesday, his second-half goal helping the La Liga giants rally for a friendly win over Arsenal.

Madrid clawed back from two goals down to finish full time at 2-2, and prevailed 3-2 in the penalty shootout dictated by the International Champions Cup exhibition tournament format.

Welsh star Bale didn't play in Madrid's 3-1 loss to Bayern Munich in Houston on Saturday, manager Zinadine Zidane saying Monday he declined to dress for the match as the club pursued options for off-loading him.

Zidane said at the weekend he thought it would be "best for everyone" if Bale's departure could be arranged quickly - comments Bale's agent branded "disrespectful" of a player who helped the side to a Spanish league title and four Champions Leagues since arriving from Tottenham six years ago.

Zidane insisted Monday he meant no disrespect, and Bale duly came in at halftime on Tuesday and made a statement.

"He had a good game and I'm happy for him," Zidane said. "I do not know what's going to happen, for now he's with us. It did not change anything."

First-half goals from Alexandre Lacazette​ – who converted a penalty in the 10th minute and Pierre-Emerick Aubameyang had put Arsenal up 2-0 at the break, by which time both teams were reduced to 10 men.

Bale pulled one back in the 56th minute, latching onto a loose ball and slotting it home. Marco Asensio drilled in the equalizer three minutes later, blasting a low Marcelo cross past Emiliano Martinez.

Minutes later Asensio was on the ground, apparently injured with little contact to be stretchered off.

Bale continued to offer reminders of his worth clearing a goal-bound Aubameyang drive off the line following a goalmouth scramble, and missing just wide with a curling effort off his left foot 10 minutes from time.

Eddie Nketiah, who scored three goals in Arsenals two prior friendlies a 3-0 win over Fiorentina and a 2-1 victory over Bayern Munich missed two good chances late.Bale's fortunes dipped in the shoot-out, when he came up first for Madrid and saw his effort saved easily before the Spanish side prevailed.

Arsenal had appeared on their way in the early stages at FedEx Field, home of the NFL's Washington Redskins.

Madrid's Nacho, cautioned for a clumsy tackle on Sead Kolasinac in the first five minutes, received a second booking and was sent off for a deliberate handball in the eighth after sticking his arm out to stop a ball from Lacazette on the line.

Lacazette took the ensuing penalty, his attempt hitting both posts before crossing the line to put Arsenal up 1-0 with a man advantage. Lacazette then turned provider for Aubameyang, who doubled the score in the 24th minute.

But Arsenal's comfort level dropped in the 40th, when Sokratis Papastathopoulos was sent off for a second bookable offense a foul on Luka Modric minutes after he'd been shown a yellow card for yanking back Toni Kroos on the counter.

Arsenal won the first three games of their North American tour, starting with a 3-0 win over Major League Soccer's Colorado Rapids and now head back across the Atlantic.