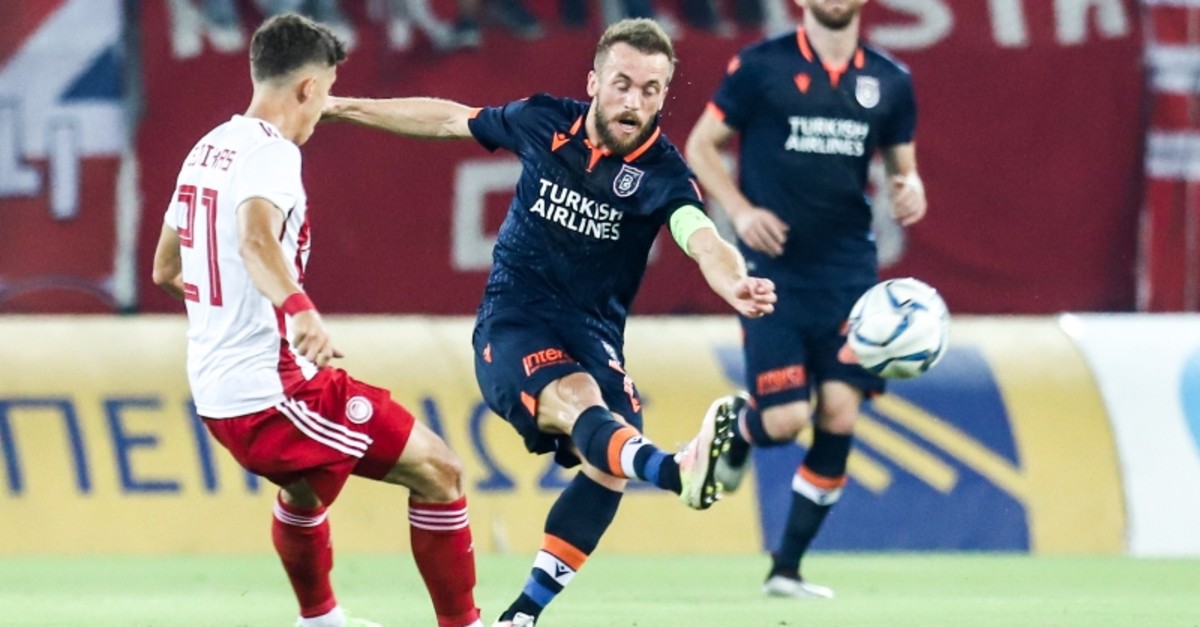 The Piraeus club beat the Istanbul side 2-0 at the Georgios Karaiskaki stadium in Athens in the third qualifying round second leg.

Neither team were able to score in the first half.

In the second half, Ruben Semedo gave a lead to Olympiakos in the 55th minute.

Former Fenerbahçe star Mathieu Valbuena doubled his team's lead after he scored a penalty in the 78th minute and Olympiakos won the game 2-0.

The Turkish club lost to Olympiakos 1-0 at home in the third qualifying round first leg in Istanbul.

Finishing last year's Greek Super League One second behind Thessaloniki rivals PAOK, Olympiakos, the most successful Greek football club both in the domestic and the international scene, qualified for the Champions League playoffs with this victory and will face Russia's FC Krasnodar on Aug. 21 and 27. Krasnodar sprung a major upset with a 3-2 win against Portuguese giants Porto to advance on away goals after losing the home leg 1-0.

Meanwhile, PAOK was pushed out of the tournament by last season's semi-finalist Ajax Amsterdam as the Dutch side came from behind to beat the Greek champions 3-2 for a 5-4 aggregate win.

Romania's Cluj won 4-3 at Celtic to eliminate the Scottish champions 5-4 on aggregate.

Ajax youth academy reject Diego Biseswar fired PAOK ahead with a thumping shot at the Johan Cruyff Arena before Dusan Tadic, having had a penalty saved, equalized with another one before halftime.

PAOK keeper Alexandros Paschalakis pulled off a string of superb saves but was undone by a Nicolas Tagliafico header and another Tadic penalty before Biseswar set up a tense finish with a stoppage-time effort.

Ghanaian forward Richmond Boakye fired Red Star ahead in Copenhagen and Dame N'Doye levelled to force the shootout in which the Danish champions missed two chances to progress before they were dumped out by visiting keeper Milan Borjan.

Borjan kept Red Star afloat with two stops and netted a spot-kick himself before he sent the away fans into raptures when he blocked Jonas Wind's weak effort to send the Serbians through.

Having earned a 1-1 draw in Romania, Celtic rallied from an early deficit to lead 3-2 before a late collapse gifted Cluj two late goals and a 5-4 aggregate win over the 1967 European champions.

Billel Ormani scored for Cluj after they trailed 2-1 and 3-2 and George Tucudean delivered the final blow in stoppage time as Celtic threw men forward.

Porto fell 3-0 behind to Krasnodar in a dire first half for the Portuguese side as Magomed Suleymanov struck twice after Tonny Vilhena had levelled the tie on aggregate.

The hosts, who have won Europe's premier club competition twice, hit back in the second half through Ze Luis and Luis Diaz but the Russian visitors held on at the Dragao stadium.

Dynamo Kiev looked like overturning a 1-0 first-leg deficit against Club Bruges after Vitaliy Buyalskiy netted early on but the Belgian side hit back.

Stoppage-time substitute Lois Openda silenced the home crowd in Kiev barely a minute after coming on, scoring in the 96th minute to secure a 3-3 draw and book Bruges a playoff clash with Austrians LASK.

LASK followed up their 2-1 win at Basel with a 3-1 home victory over the Swiss team, while Dinamo Zagreb thumped Ferencvaros 4-0 away after a 1-1 home draw with the Hungarians.

Rosenborg beat Maribor 3-1 for a 6-2 overall win over the Slovenians, APOEL won 2-0 at Qarabag to overturn a 2-1 home defeat.