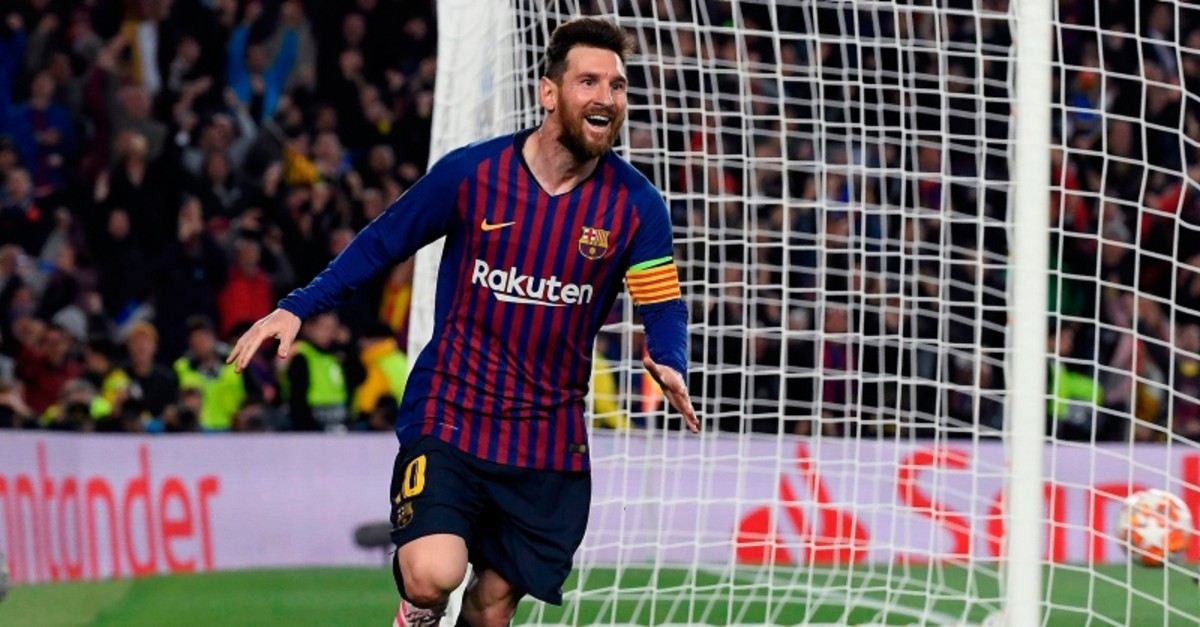 Barcelona's Argentinian forward Lionel Messi celebrates after scoring a goal during the UEFA Champions League semi-final first leg football match between Barcelona and Liverpool at the Camp Nou Stadium in Barcelona on May 1, 2019.
by Aug 23, 2019 12:08 am

Lionel Messi will likely make his La Liga debut this season, after suffering a preseason injury, as Barcelona kicks off its second week with a game against Real Betis

Lionel Messi is poised to return for champions Barcelona as they host Real Betis, aiming to obtain their first points of the new La Liga season.

The Catalans suffered a 1-0 defeat by Athletic Bilbao on opening day, but hope to have their inspirational captain back for the clash at Camp Nou on Sunday.

Messi missed pre-season and the first game with a calf injury but trained normally on Wednesday ahead of a potential weekend comeback.

Other forwards Luis Suarez and Ousmane Dembele both sustained injuries against Athletic and will not be fit to face Betis, but Messi could be paired with Antoine Griezmann, or appear from the bench.

Valverde hopes Griezmann can get more involved than he did at the San Mames, with the Frenchman quiet during Barcelona's defeat. "If he is close to the box he can finish, he moves well, but you have to dominate the game for that to happen," said the Barcelona coach. "We expect a lot from all the players and he has to look to get in the game more."

Betis also tasted defeat on the opening weekend, suffering a 2-1 beating by Real Valladolid, who travel to face Real Madrid this weekend. Barcelona's archrivals got off to a winning start and will look to build on it at home on Saturday.

Winger Gareth Bale started last weekend at Celta Vigo for Madrid, despite coach Zinedine Zidane saying he wanted the Welshman to leave in the preseason.

If the club record signing can continue the form he showed in the 3-1 win at Balaidos, Zidane will find him to be a useful weapon still. "He (Bale) is going to stay," Zidane said. "Everyone we have helps us to think positively. Gareth, James (Rodriguez), everyone here will defend the shirt the way it deserves to be."

James is another player Madrid tried to sell this summer but it now looks like the Colombian will end up staying at the Santiago Bernabeu.

"If they're at their best it will be difficult, but we won at Betis where nobody made us favorites," defender Kiko Olivas said. "It's good to focus on what we have to do. We are the team that we are, and if we don't focus on ourselves, we don't have a chance."

Atletico Madrid got off to a winning start against Getafe last weekend and on Sunday face another club from the Spanish capital, Leganes.

Star summer signing Joao Felix had some bright moments on his debut but coach Diego Simeone believes there is a lot more to come from the Portuguese forward. "The first league game is not easy. It's complex," Simeone explained. "As an individual, (Felix) showed his power and hopefully these situations appear more often. He has to keep improving." The weekend's other fixtures are Granada vs. Sevilla, Levante vs. Villarreal, Osasuna vs. Eibar, Celta Vigo vs. Valencia, Getafe vs. Athletic Bilbao, Alaves vs. Espanyol and Real Mallorca vs. Real Sociedad.