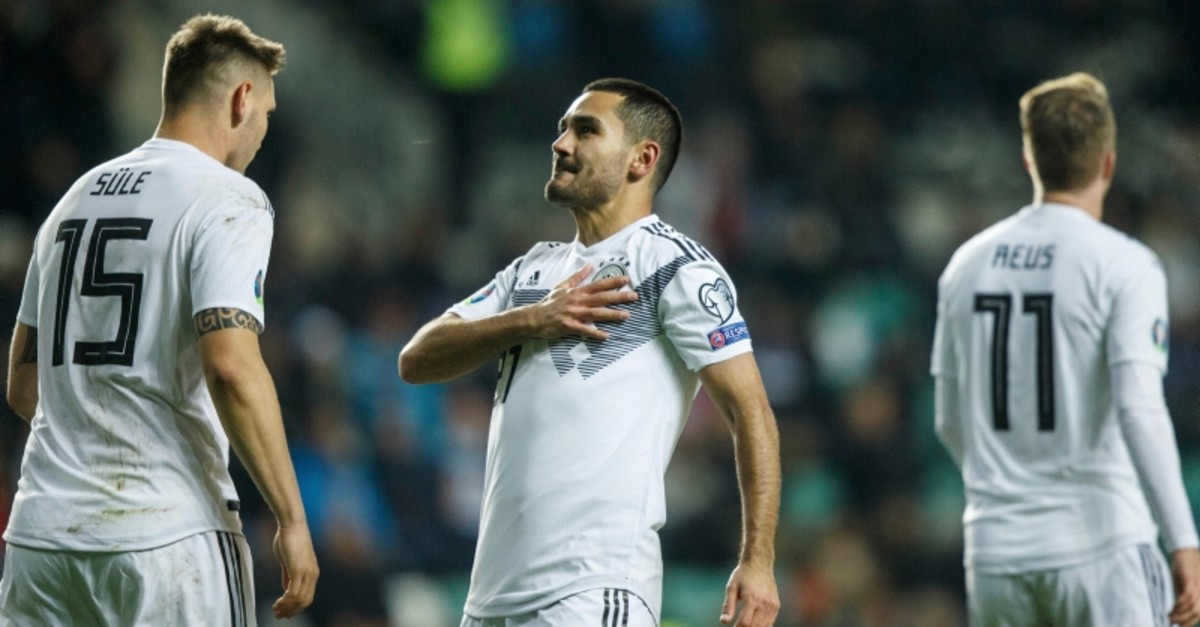 German-Turkish footballer İlkay Gündoğan scored twice to rescue Die Mannschaft against Estonia in the Euro 2020 qualifiers after Emre Can, another German-Turkish player, was booked for a red early in the game

İlkay Gündoğan scored two second-half goals to help 10-man Germany claim a 3-0 win away to lowly Estonia in Sunday's Euro 2020 qualifier, despite the early dismissal of Emre Can.
Germany won 8-0 when the sides met in Mainz last June, but the visitors got into trouble when Can was sent off after just 14 minutes in Tallinn for a foul as the last man.
After a goalless first half, Manchester City midfielder Gündoğan struck twice before replacement striker Timo Werner added a third to keep Germany on course to qualify for next year's finals.
"After a quarter of an hour we were down to 10 men, so everything was more difficult and we had to adjust," said Germany captain Manuel Neuer.
"I don't think it was a bad performance. It was a question of time before the goals came and at some point, we cracked them." The Germans stay second in the table but moved level on 15 points with Group C leaders the Netherlands, who beat Belarus 2-1 in Minsk earlier in the day.
Wins next month for Joachim Loew's side against Belarus in Moenchengladbach and Northern Ireland in Frankfurt will ensure Germany's place at Euro 2020.
Germany was dealt a blow before kick off when in-form winger Serge Gnabry, who scored in Wednesday's 2-2 friendly draw with Argentina in Dortmund, was pulled from the starting lineup with a leg injury.
Can then quickly added to Loew's woes against the group's bottom side with the earliest red card ever shown to a Germany international.
Playing out of position at center back, the Juventus midfielder was sent off for lunging into a tackle, as the last man, on Estonia forward Frank Liivak. It was the first straight red card of Can's career.
Nevertheless, Germany had the best first-half chance when Marco Reus curled his free kick over the wall but against the woodwork.
Gündoğan broke the deadlock early in the second half when his shot clipped Reus's boot and beat the Estonia goalkeeper from 20 meters out. Six minutes later, after an exchange of passes between Reus and winger Julian Brandt, Gündoğan's shot on the edge of the area again took a deflection to make it 2-0.
Werner, on for Freiburg striker Luca Waldschmidt, made it 3-0 on 71 minutes when a Gündoğan pass picked out the RB Leipzig striker, who fired home across the goal.
Last Update: Dec 20, 2019 1:03 am
RELATED TOPICS