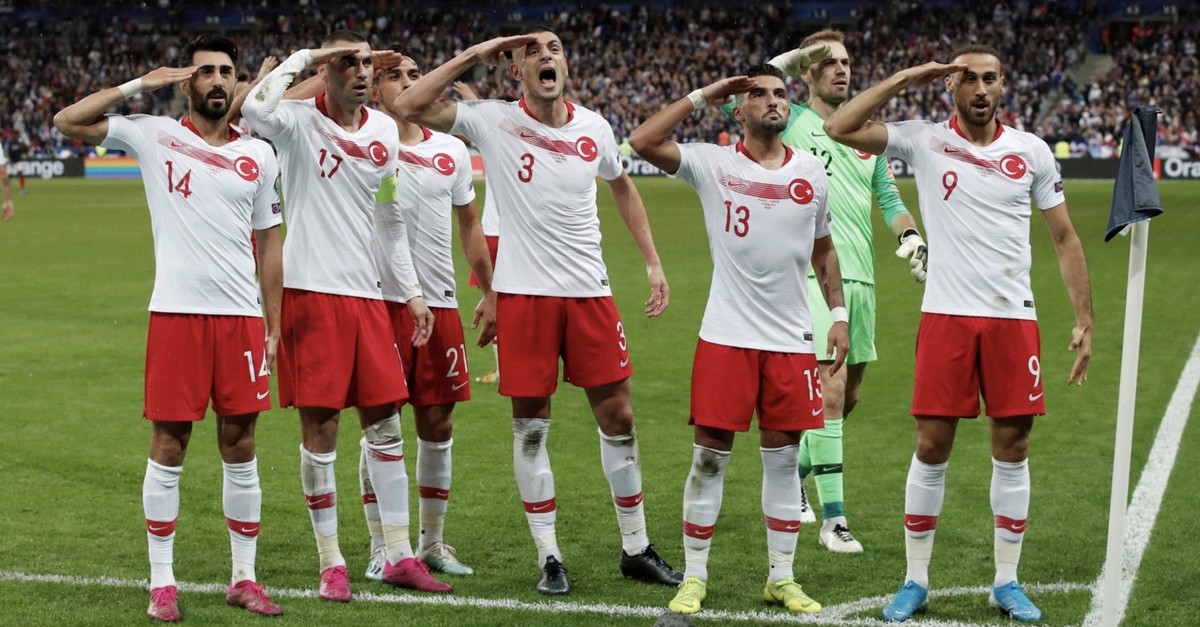 The stalemate would prolong both France and Turkey's wait to qualify for the finals next year.

Substitute Olivier Giroud headed in from a corner to put France ahead on 76 minutes at the Stade de France but Kaan Ayhan nodded in an equalizer six minutes later, a goal celebrated by a military salute in front of the Turkish supporters. The military salute was a send-off to the Turkish forces carrying out a counterterrorism offensive against PKK-linked terrorists in northern Syria.

Prior to the match, French far-left leader Jean-Luc Melenchon has called Turkish footballers to be "treated as enemy soldiers if they make military salutes" while UEFA was expected to start proceedings against Turkey later this week for another military salute in last week's Euro 2020 qualifier between Turkey and Albania.

Turkish players defied the calls against military salute and won the hearts of millions of Turkish fans as Turkey laments the international community opposing the Syrian operations, despite Turkey's right to defend itself against terror threats.

Turkey remains top of Group H above the world champions on the head-to-head rule, although France can qualify for the finals with a win at home to Moldova next month. Turkey would clinch their place by avoiding defeat against third-placed Iceland, who are four points back after beating Andorra 2-0.

"They scored a goal from a set piece in the first match. We could have avoided it," said France coach Didier Deschamps, whose side were beaten 2-0 by Turkey in Konya in June. "We did what we needed to win the match based on the play and number of chances. They didn't have many but put away a set piece. We should have been more clinical even if it's still a good point," he added. "We're still on track and need to finish the job in November."

In the starting 11, Wissam Ben Yedder had replaced Giroud, Friday's goalscorer in the 1-0 win away to Iceland, while Lucas Hernandez returned at left-back at the expense of Lucas Digne. Turkey was without injured veteran captain Emre Belözoğlu, who damaged ribs during a last-gasp 1-0 victory at home to Albania last week, with Leicester defender Çağlar Söyüncü starting in place of Ayhan.

While Antoine Griezmann has yet to properly settle at Barcelona this season, the forward emerged at the heart of France's best moments in the first half as Turkey was forced to absorb constant pressure.

Griezmann then headed a Coman cross directly at Günok who plunged to his left moments later after a clever dummy from the striker created another opening for Sissoko. Without a goal now for France in the past six qualifiers, Griezmann again went close when he curled wide of a sprawling Günok and the far post from the edge of the area.

Turkey coach Şenol Güneş introduced Hakan Çalhanoğlu at the break to provide more of an attacking threat, with the AC Milan playmaker helping create the visitors' first genuine chance on the hour.

Ayhan came on in the 53rd minute for injured Zeki Çelik. Seconds after a Griezmann penalty appeal was dismissed, Turkey exposed France on the counter with Çalhanoğlu teeing up Burak Yılmaz who drilled over with just Steve Mandanda to beat. Deschamps turned to Giroud for the final 20 minutes and was instantly rewarded as the Chelsea striker powered in a Griezmann corner for his 38th France goal, moving him three shy of Michel Platini on the French all-time scoring list. Ayhan denied France qualification on the night as he planted a thumping header low beyond Mandanda from a Çalhanoglu free kick.

Meanwhile, concerns over violence proved largely unfounded, although a banner in support of terrorist groups in Syria was held up in the closing minutes, clearly visible to many of the Turkish supporters. Stewards moved in to confiscate it but scuffles briefly ensued in that section, as well in another stand located further up in a tense finale.

Turkey now has 19 points in its group with only two matches left, including one against Iceland, which was the only team that it lost in Euro 2020 qualifiers so far. After hosting Iceland in November, Turkey will travel to Andorra. France will host Moldova and play against Albania in an away game.

Şenol Güneş lauded France for "playing better" than his team though he acknowledged the "labor" of the team which tried to lift the game up and managed to secure a draw. "We are glad we remain group leader," Güneş said in a post-match press conference. "I thank God for winning one point," he said, saying they played against a very strong team.

"We have more work to do and playing against Iceland will be like a final game for us. We need at least a draw against them," he said. Güneş praised fans who came from all around Europe.

"They set an example and I am also grateful to French fans for acting in fair-play," he said. Güneş downplayed political tensions of the match that came as France joined the chorus of anti-Turkish sentiment following the latter's operations in Syria.

He also dismissed the players' military salute. "They did not act in bad intentions. We didn't send our troops there to kill people. We sent them to protect [our country]," he said. Güneş cut short questions about politics. "This is a job for Macron or Trump. They are the ones running the world. I barely run a team," he said.