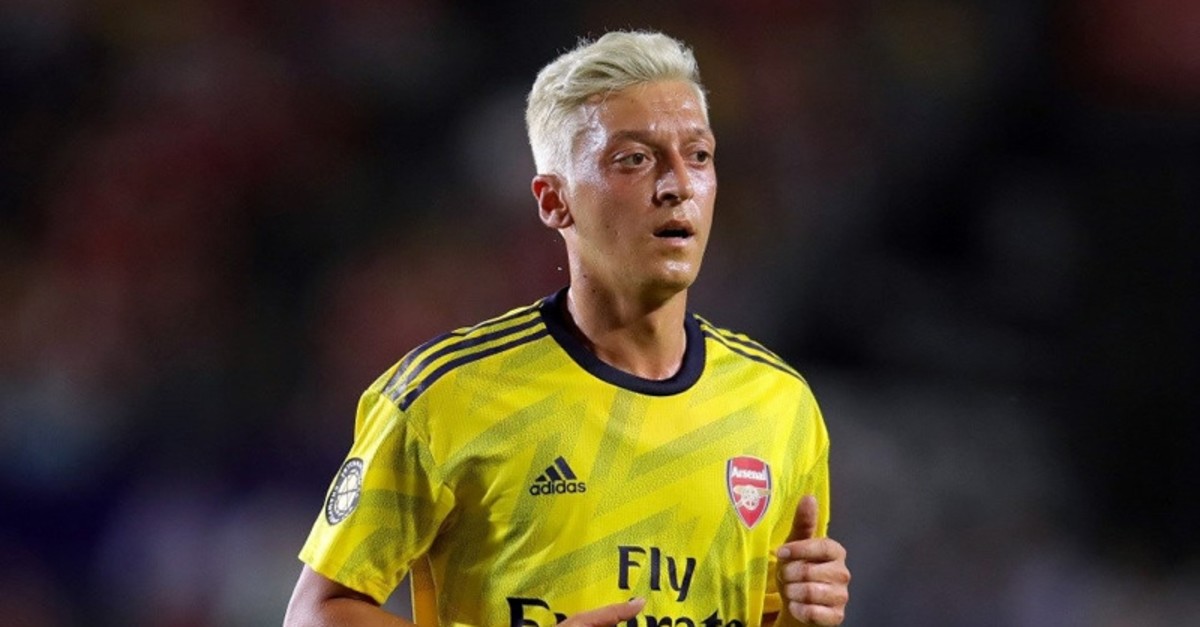 More than a year after quitting the German national team, Arsenal's star Turkish midfielder Mesüt Özil says racism is still a major problem in Germany and that he does not regret his decision

Arsenal midfielder Mesut Özil said Wednesday he has no regrets about retiring from international football, a decision he says he made because racism is still a big problem in Germany.

The 31-year-old quit the national team after the 2018 World Cup finals, saying he had been subjected to racist abuse following a photo of him with Turkish President Recep Tayyip Erdoğan before the tournament.

"With time to reflect, I know it was the right decision," Özil told The Athletic.

"It was a very difficult period for me as I played nine years for Germany and was one of their most successful players. I won the World Cup and more, played a lot of games - a lot of them really good - and gave everything. But after the photo, I felt disrespected and unprotected. I was receiving racist abuse - even from politicians and public figures - yet nobody from the national team came out at that time and said, 'Hey, stop. This is our player, you can't insult him like that.' Everyone just kept quiet and let it happen."

Özil, born in Germany to Turkish parents, explained that racism has become a serious problem in his home country.

"There are major problems in Germany - just look at what happened in Halle last week, another anti-Semitic attack," he said. "Unfortunately, racism is no longer only a right-wing issue in the country. It has shifted into the middle of society."

Özil said he was subjected to a series of incidents of racist abuse during the World Cup, when Germany failed to get out of the group stage. "When we were knocked out and I came off the pitch, German people were telling me, 'Go back to your country,' 'F*** yourself,' 'Turkish pig' and stuff like that," he said.

Özil, who said Manchester City midfielder İlkay Gündoğan — another to be photographed meeting Erdoğan — was also racially abused, added that he had also lost out financially. "Before the World Cup I was supposed to be the face of some commercial deals, but suddenly they canceled everything and removed me from their campaigns (and) some of my German charities dropped me as an ambassador and advised me to distance myself from the photo.

"But what upset me most was the reaction of the school I went to in Gelsenkirchen. I've always supported them and we decided to do a year-long program together. At the end, I was going to attend a ceremony and meet all of the staff and children, many from immigrant backgrounds. Everything was planned. But then the school director told my team I should not come because of the media attention and the rise of the right-wing [Alternative for Germany] AfD party in their city. I couldn't believe it. My home town, my school. I gave them my hand but they didn't give theirs back. I've never felt so unwelcome."

Özil has endured a tough start to the season, playing just twice for Arsenal in 11 games, after also being targeted in an attempted car-jacking outside his house. But the forward, who signed a new three-and-a-half-year deal in February 2018, said he had no intention of leaving the club.

"I have a contract until the summer of 2021 and I will be staying until then," he said. "When I signed the new deal, I thought about it very carefully and said it was one of the most important decisions of my footballing career. I didn't want to stay for just one or two more years, I wanted to commit my future to Arsenal and the club wanted me to do the same."

"You can go through difficult times like this but that is no reason to run away and I'm not going to. I'm here until at least 2021," he added.