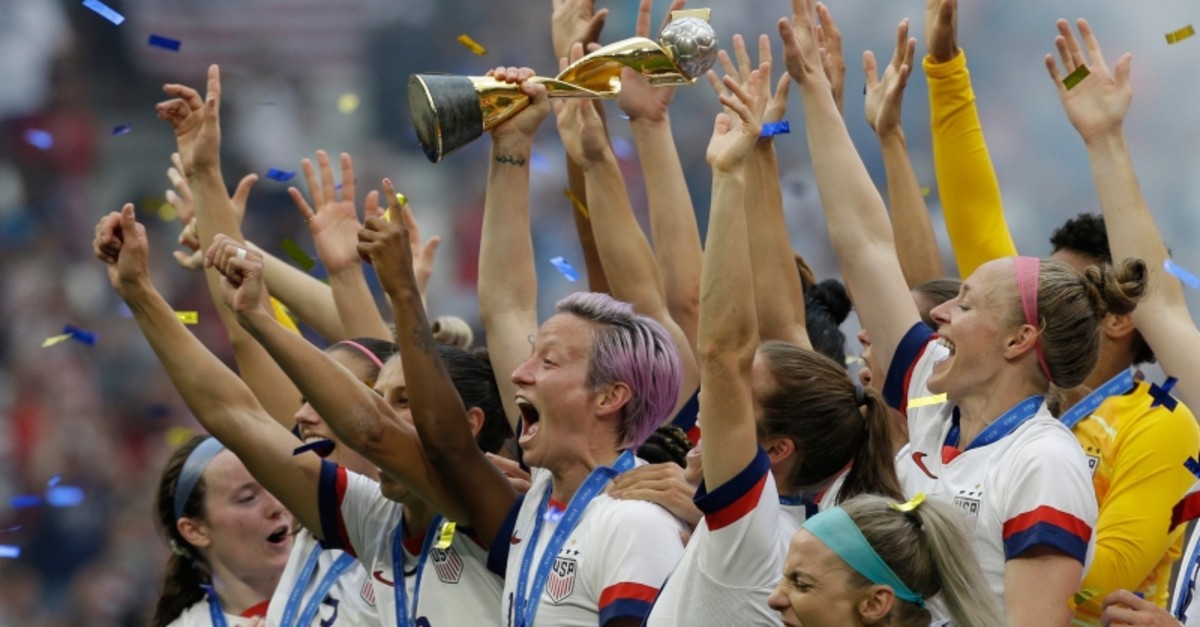 In this July 7, 2019, file photo, U.S. player Megan Rapinoe holds the trophy after winning the Women's World Cup final soccer match against The Netherlands at the Stade de Lyon in Decines, outside Lyon, France. (AP Photo)
by Daily Sabah with AP
Oct 18, 2019 4:31 pm

This is the year of Megan Rapinoe. The U.S. soccer star was awarded FIFA's Player of the Year award after the U.S. won the Women's World Cup but she remains focused on her legal battle for pay equity for women in soccer

Megan Rapinoe is enjoying the whirlwind of a two-time World Cup winner. She picked up the FIFA Player of the Year award in Milan rocking a deeper shade of lavender hair, sent off retiring U.S. coach Jill Ellis with an undefeated victory tour and kept up the fight for pay equity against the U.S. Soccer Federation.

"It's very surreal to say the least," Rapinoe said. "Downtime? When I sleep, that's my only rest time. It's mostly good stuff, so hard to complain." Julie Foudy, a World Cup champion with the U.S. in 1991 and '99, calls Rapinoe the "golden girl." She won the FIFA Golden Boot and the Golden Ball for most goals and best player, respectively, after the U.S. beat the Netherlands 2-0 in July at the World Cup in France.

Now she's the winner of the Women's Sports Foundation's Sportswoman of the Year award, presented at the 40th annual event hosted by Billie Jean King on Wednesday night. "They're such a force in women's sports and beyond," Rapinoe said in a phone interview with the AP.

Rapinoe and her teammates were feted with a ticker-tape parade in New York after their World Cup victory. She shared the same float with U.S. Soccer Federation President Carlos Cordeiro, basking in the chants of "USA" and "Equal Pay." The U.S. women's team sued the federation in March for gender and pay discrimination. At the post-parade celebration at City Hall, Cordeiro said, "We believe at U.S. Soccer that all female athletes deserve fair and equitable pay."
However, so far the two sides haven't reached an agreement, with a May 5 trial date set in federal court in Los Angeles. Rapinoe says there's a "major discrepancy" in pay for accomplishing the same success on the field compared to the U.S. men's team. The 34-year-old said she can't understand why female athletes must fight their soccer federation so hard for pay and benefits. "I guess other than just not believing that we deserve it or not willing to pay," she said.
"I think it's really counterintuitive, you have two really amazing products in both the men's and women's teams that are both very successful by a lot of different metrics. It's a huge growing business. Soccer, in general, is growing exponentially in the country, so why not be able to leverage your best assets instead of fighting them all the time?"
U.S. Soccer has maintained that compensation for each team is the result of separate collective bargaining agreements and the pay structures are different as a result. The federation has also said the men generate more revenue than the women. However, that argument has been debated by the women's legal representatives, given the women's two consecutive World Cup titles and the revenue generated from both victory tours.

The U.S. capped its latest victory tour with a 1-1 tie against South Korea before a crowd of 33,027 at Soldier Field on Oct. 6. Rapinoe lofted a perfect pass on a corner kick to Carli Lloyd, whose header tied the match.

Rapinoe said it's 50-50 on a settlement before the trial date. "I think it would probably be in everyone's best interests not to drag this thing out or drag it through court, but that's really up to them," she said. "We deserve what is fair and right under the law." Rapinoe received the FIFA player of the year award in Milan last month but didn't get a chance to talk with FIFA President Gianni Infantino about another pay gap - the U.S. women's team received $4 million for winning the World Cup while the French men's team received $38 million in 2018. Infantino has said FIFA's total prize money for the participating women's teams will double from $30 million to $60 million at the 2023 World Cup. The men's teams received $400 million in total prize money in 2018.

King knows something about a pay fight. She threatened a boycott of the 1973 U.S. Open, reaching an agreement with a company to pay the difference before tennis leaders offered equal pay to the winners. "They'd be heroes if they did it," King said of the U.S. Soccer leadership. "It's the right thing to do, right side of history."
On Sunday, Rapinoe will be aiming for another title when her club team, Reign FC, faces defending champion North Carolina in a National Women's Soccer League semifinal. The final is Oct. 27.

The next match for the U.S. team is an exhibition against Sweden on Nov. 7 in Columbus, Ohio. New U.S. general manager Kate Markgraf, a former national player, wants to hire a replacement for Ellis by then. Rapinoe's Reign coach Vlatko Andonovski is among the candidates.

Rapinoe believes women's sports are "in a different place" since Mia Hamm, Michelle Akers and Foudy fought similar pay issues 20 years ago. The WNBA players' union and the WNBA are negotiating a new collective bargaining agreement to improve wages. The U.S. women's hockey team threatened a boycott of the 2017 World Championships to leverage better salaries and benefits. "This is the age-old tale," Rapinoe said. "The powerful have always kept a lot of the benefits of that power for themselves. With women, in particular, you have the #MeToo movement, Times Up. A lot of sports leagues – yeah, people are sick of it. I think women in general just feel really empowered in this moment."