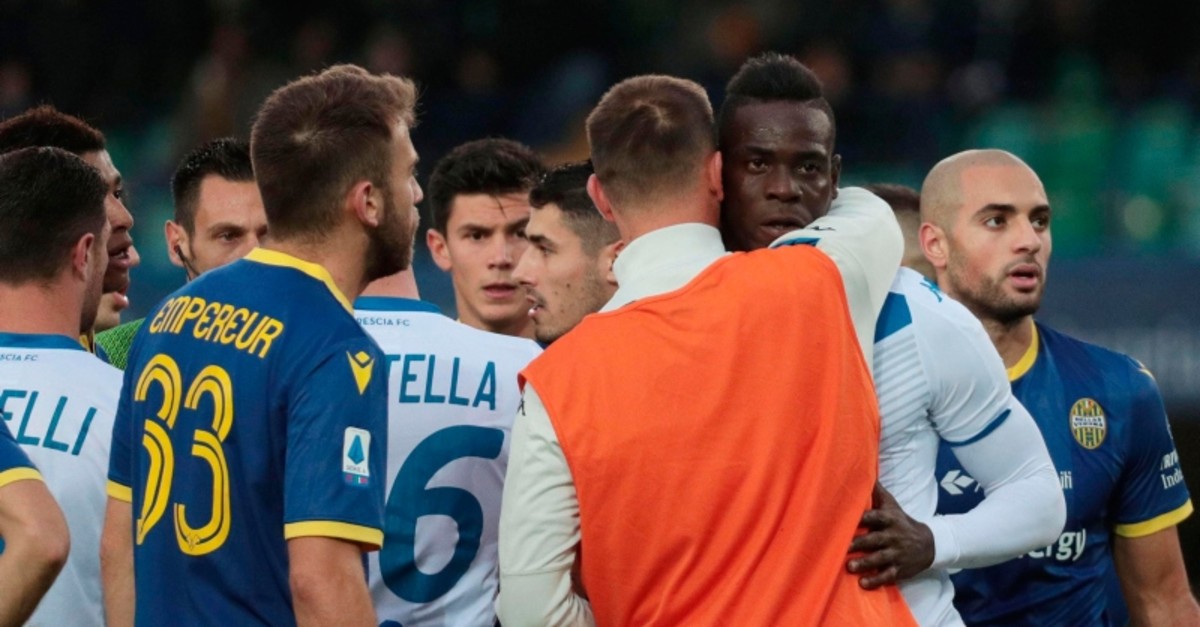 Brescia's Mario Balotelli, second from right, reacts to Verona supporters' racist chants during the Italian Serie A soccer match between Verona and Brescia at the Bentegodi stadium in Verona, Italy, Sunday, Nov. 3, 2019. (Simone Venezia/ANSA via AP)
by Nov 03, 2019 8:56 pm

Mario Balotelli kicked the ball into the stands and threatened to quit Brescia's game at Verona after home fans targeted him with racist chants during Sunday's Serie A clash.

The striker, who is back in the Serie A after terms at major Italian, English and French clubs, was calmed down by teammates and Verona players as the game was suspended for four minutes early in the second half.

Speakers at the Bentegodi stadium warned fans that the game would be abandoned under the league's anti-racism rules if abuse continued.

Balotelli, who was born in Italy to Ghanaian parents, fired a first-half free-kick against the post in the scoreless first half and scored a late consolation goal in his side's 2-1 loss.

Verona coach Ivan Juric said that nothing special happened against Balotelli, save for some hissing and teasing chants with no racial connotation.

Verona moved into ninth on 15 points while boasting the best defense alongside champions Juventus on nine goals conceded – although their attack is among the weakest with as many scored. Brescia are in the three-team drop zone on seven points with a game in hand.

Elsewhere, Cagliari won 2-0 at 10-man Atalanta and drew level on points with the Bergamo hosts.

Atalanta is unbeaten in away action, but lost its second home game to a first-half own goal from Mario Pasalic followed by Christian Oliva's drive in the 58th.

Home captain Alejandro Gomez almost leveled when he hit the bar before forward Josip Ilicic was red-carded for kicking an opponent in the 39th.

Both sides have 21 points from 11 games, with Atalanta in fourth leading the Sardinia side on goal difference. The Bergamaschi are the league top scorers on 30 goals.

"Obviously, enthusiasm is high after games like this," Cagliari coach Rolando Maran said. "It is something we must learn to control. It can be a positive thrust, but we must continue on this path.

"Thinking about (qualifying for) Europe is not forbidden, but let's think day by day, with the will to grow that we have displayed so far."

Udinese won 3-1 in a comeback away to Genoa, with assistant coach Luca Gotti in charge after the dismissal of Igor Tudor. Promoted Lecce and Sassuolo drew 2-2.

Front-runners Juventus (29) won 1-0 against Torino Saturday to stay one point ahead of Inter Milan, which beat Bologna 2-1. Roma went third on 22 by beating Napoli 2-1.