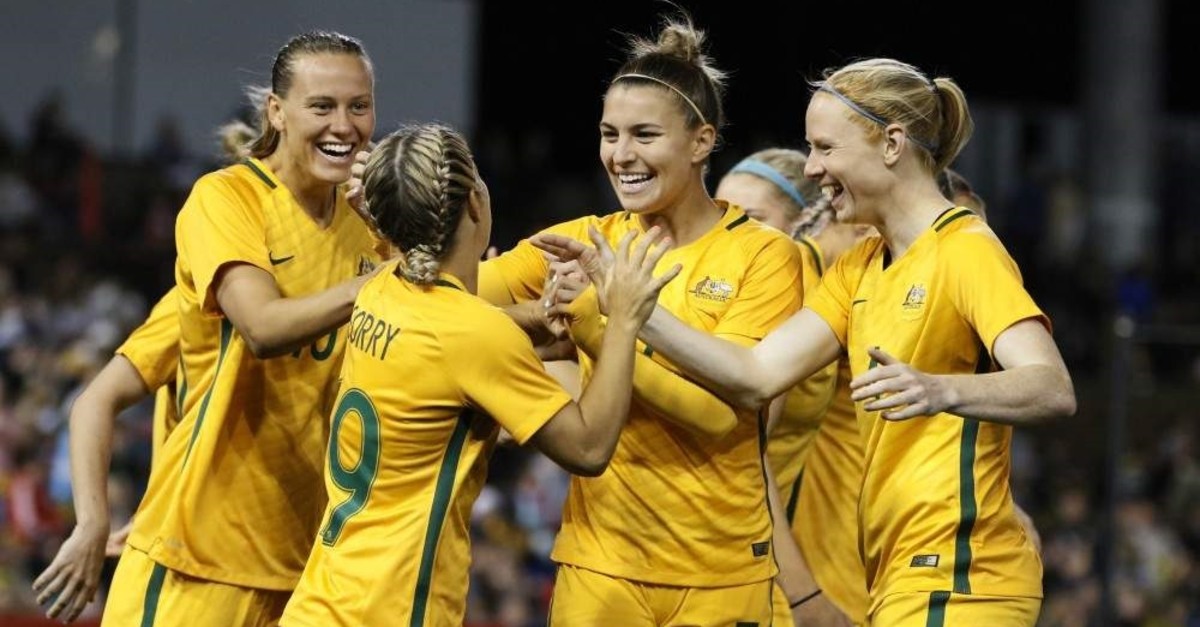 Australia's national team players celebrate during a friendly match between the Australian Matildas and Brazil at McDonald Jones Stadium in Newcastle, Australia, Sept. 19, 2017. (EPA Photo)
by Nov 06, 2019 11:24 am
Women footballers playing for Australia's national team will earn the same as their male counterparts under a deal unveiled Wednesday and hailed as landmark for gender equality in sport.
Under a new centralized contract system announced by Football Federation Australia (FFA), Matildas stars such as Sam Kerr and Ellie Carpenter will be paid an equal amount as big-name Socceroos like Aaron Mooy and Mat Ryan.
They will also be afforded business class flights to international fixtures and tournaments, like the men.
The breakthrough will be a big boost for America's women footballers, who have filed an equal pay lawsuit against the U.S. Soccer Federation due to be heard in May next year.
The United States triumphed at the Women's World Cup in France this year with chants of "equal pay" ringing out after they defeated the Netherlands in the final.
"Football is the game for everyone, and this new collective bargaining agreement is another huge step toward ensuring that we live the values of equality, inclusivity and opportunity," said FFA chairman Chris Nikou.
Under the four-year deal, through the next World Cup cycles, the Socceroos and Matildas will receive a 24% share of national team revenues, rising by 1% each year.
In other words, the better they do, the more they get paid.
FFA chief David Gallop said it was the "Socceroos' choice to share the revenue," and national captain Mark Milligan said women were getting "what they deserve."
"It's been clear for everybody how much the women's game has grown over the past few years and how well our Matildas have been doing," he said, adding that the success of the World Cup in France, where the Matildas were knocked out on penalties in the last 16, underscored this.
"It really drove home for me in these negotiations that they got what they deserved. Going forward, what a value they are to the Australian football community."
From the national revenues, the players have agreed to plow 5% back into Australian youth national teams, guaranteeing a minimum level of investment for future generations.
There has also been an increase from 30% to 40% in players' share of prize money earned on qualifying for a World Cup.
Matildas midfielder Elise Kellond-Knight said the deal showed "respect" toward women.
"As a female footballer, it's kind of what we always dreamed of," she said.
It follows a more general deal struck earlier this year that will see all professional female footballers in Australia receive the same minimum wage as their male counterparts.
Professional Footballers Australia chief John Didulica called the agreement "unique" in world football.
"We believe it sets the model for where all federations and players – male and female – can take the game to unlock the incredible social and commercial opportunity that, in particular, women's football presents," he said.
Australia has emerged as a champion for equality in the sports arena with netballers and women cricketers also winning better pay deals in recent years.
Earlier this year, 17 sporting chief executives in Australia all threw their weight behind a drive to close the pay gap and advance all aspects of women's sport.
Only last month, the International Cricket Council announced a 320% increase in prize money for the women's Twenty20 World Cup in Australia next year.
It still left women earning less than men at a similar tournament, prompting Cricket Australia to pledge it would make up the difference to ensure parity with the men's winnings for its team.
A handful of other sports have also moved to address gender inequality, with the World Surf League for the first time this year paying equal prize money following a backlash on social media.
Tennis was a leader in introducing equal pay for women at the Grand Slams, with the Williams sisters among the most outspoken on pay parity.
Last Update: Dec 20, 2019 1:29 am
RELATED TOPICS