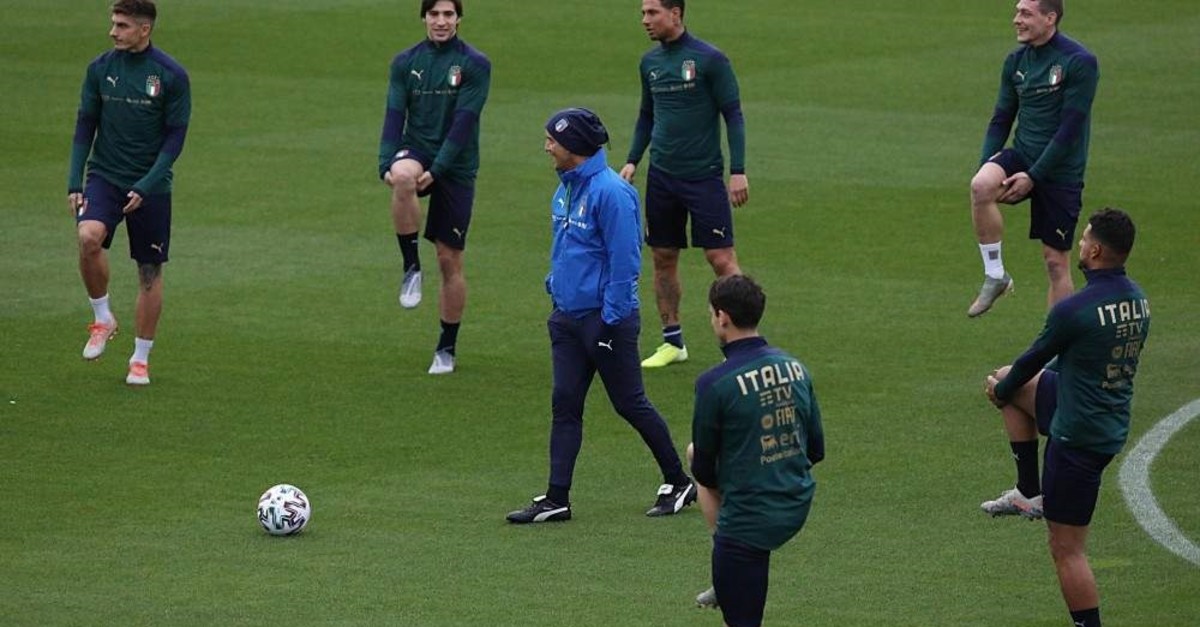 Italy coach Roberto Mancini, center, leads a training session, Coverciano, Nov. 11, 2019. (AP Photo)
by Nov 13, 2019 3:28 pm
It is time for tuning up and experimenting for early group winners Italy, where coach Roberto Mancini looks to set a record of successive wins in Friday's penultimate Euro 2020 qualifier
at Bosnia-Herzegovina. The Azzurri clinched first place in Group J last month through a 5-0 drubbing of Liechtenstein, with Mancini tallying a ninth straight success to equal the 1930s record of two-time world champion Vittorio Pozzo. "The game against Bosnia will be a great test," Mancini said. "We'll be playing in a small and boisterous stadium (at Zenica) and they'll give 200%, as they did in the first match (which Italy won 2-1 last June in Turin)." Bosnia's chances of direct qualification are slim, as they sit five points behind second-place Finland, but they have access to the March playoffs, having won their Nations League group in League B last year. Captain Edin Dezko from Roma and Juventus playmaker Miralem Pjanic will be Mancini's main worries, with midfielders Rade Krunic (AC Milan) and Mato Jajalo (Udinese) also likely to appear. Either the Bosnia visit or the closing home game to Armenia on Monday could be a showcase for youngster Sandro Tonali, who had a first brief appearance in Liechtenstein and hopes for more as Mancini misses the injured playmaker Marco Verratti. Tonali's Brescia team-mate Andrea Cistana, a defender, is one of three young newcomers with Fiorentina's Gaetano Castrovilli and Riccardo Orsolini from Bologna. Striker Mario Balotelli, now at promoted Brescia after terms in England and France, is the best active scorer with 14 goals for Italy but has not been called up since a lacklustre appearance in September 2018. His summoning had been suggested by domestic federation chief Gabriele Gravina after the black footballer was targeted by racist chants earlier this month. "I really like Mario, I gave him his debut (at 17 with Inter Milan in 2007)," Mancini said. "If he were to be called up, it'd be because he was doing well and could be of use to the national team. I believe it's more important to call him up if he deserves it." The key striker's place will again be contested between Lazio's Ciro Immobile, the Serie A top scorer on 14 goals from 12 games, and Torino's Andrea Belotti (7). "They'll play one match each," the coach said.
"They're two similar players who play in the same areas, but everything is possible if you try." Tactical tweaks are expected in midfield, where Stefano Sensi, Lorenzo Pellegrini and Bryan Cristante are out alongside Verratti, which should give leading roles to Italian-Brazilian Jorginho and Nicolo Barella. The versatile Alessandro Florenzi and winger Lorenzo Insigne hope for a chance as they come off dull periods at Roma and Napoli, respectively. Juventus veteran Leonardo Bonucci is to lead a defense where Leonardo Spinazzola is unavailable but Mancini has nine more to pick from.
Last Update: Dec 20, 2019 1:39 am
RELATED TOPICS