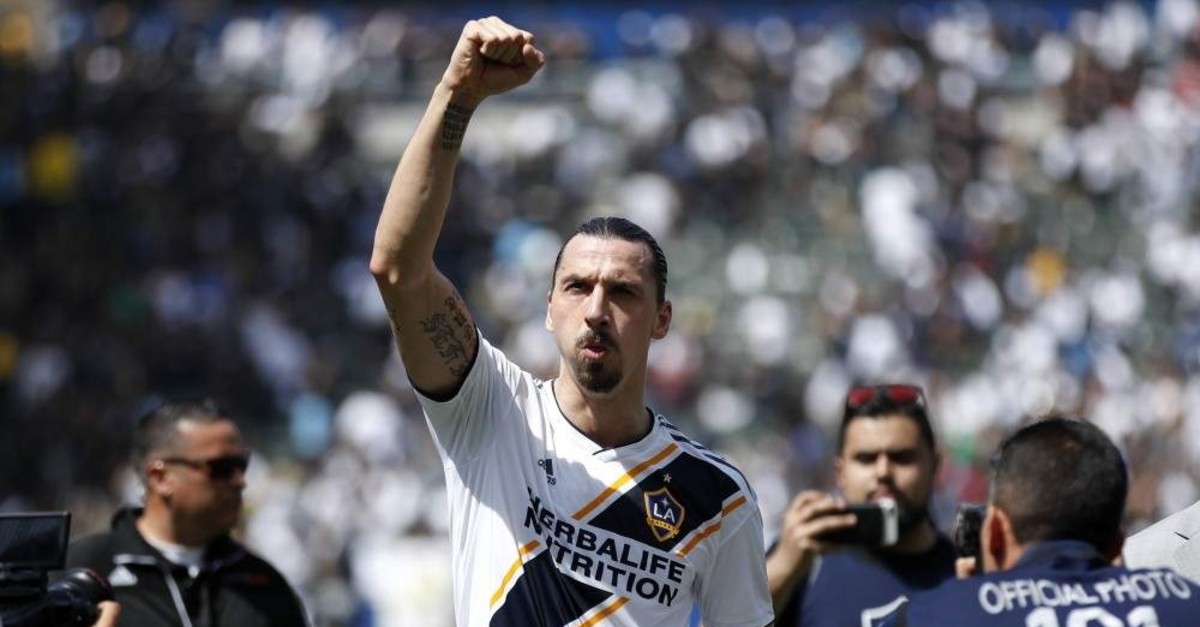 Ibrahimovic salutes fans as he walks off the field after an MLS match in Carson, Calif., March 31, 2018. (AP Photo)
by Compiled from Wire Services Nov 14, 2019 1:37 pm
Swedish star Zlatan Ibrahimovic confirmed his departure from the Los Angeles Galaxy on Wednesday, but gave no clue over his future plans or possible retirement.
“I came, I saw, I conquered,” Ibrahimovic wrote on Twitter. “Thank you LAGalaxy for making me feel alive again. To the Galaxy fans - you wanted Zlatan, I gave you Zlatan. You are welcome. The story continues... Now go back to watch baseball.”
The Swedish superstar scored 56 goals in 52 Major League Soccer (MLS) games after joining the Galaxy in March 2018, injecting his inimitable blend of talent and swagger into a stagnating club. This season, he scored a franchise-record 30 goals — more than the rest of the Galaxy roster combined (28).
A week before Zlatan debuted with a dramatic two-goal performance as a substitute in a win over crosstown rival Los Angeles FC, he announced his arrival in Hollywood by taking out a full-page ad in the Los Angeles Times reading simply: “Dear Los Angeles, You’re welcome.”
“Since his arrival in 2018, Zlatan has positively influenced the sport of football in Los Angeles,” Galaxy President Chris Klein said in a statement announcing the departure. “We are grateful for his work ethic and passion. We thank Zlatan for his professionalism and immeasurable impact on the Los Angeles community and the football community in North America as a whole.”
Ibrahimovic’s MLS jaunt was a mixed success, at least by his lofty standards. He was an elite, steady scorer for the five-time league champions and was likely the league’s top box-office draw on the road, and he kept the market in thrall with his bold pronouncements and rivalries with opponents and clubs, particularly LAFC in the Galaxy’s El Trafico rivalry series.
But the Galaxy won just one playoff game in Zlatan’s tenure, and they finished eighth in the overall league table this season after missing the playoffs in his debut campaign. He lost the MLS MVP award this year to LAFC’s Carlos Vela, who scored a league-record 34 goals.
Although Ibrahimovic was their most important player for the past two seasons, the Galaxy didn’t expect Ibrahimovic to end his career with them, and he does not appear to be close to retirement. Rumors of his departure have been heard for months, and Ibrahimovic has never stayed at any club for more than four seasons in his peripatetic career.
Ibrahimovic has been linked recently to a return to AC Milan, where he played two seasons and scored 42 Serie A goals from 2010-12. Milan is currently mired in 14th in the standings in Italy’s top league while scoring just 11 goals in its 12 games.
Ibrahimovic, Lionel Messi and Cristiano Ronaldo are the only active players in the world to score 500 career goals between their club teams and international play. Zlatan scored his 500th last season.
A few weeks ago, Ibrahimovic claimed that “if I don’t stay, nobody will remember what MLS is.”
But the Galaxy already have a direction for their future, acquiring young star Cristian Pavón from Argentina to join Guillermo Barros Schelotto, his former coach at Boca Juniors. The free-spending club also should have money available from Ibrahimovic’s departure to bolster their front line.
Last Update: Dec 20, 2019 1:40 am
RELATED TOPICS