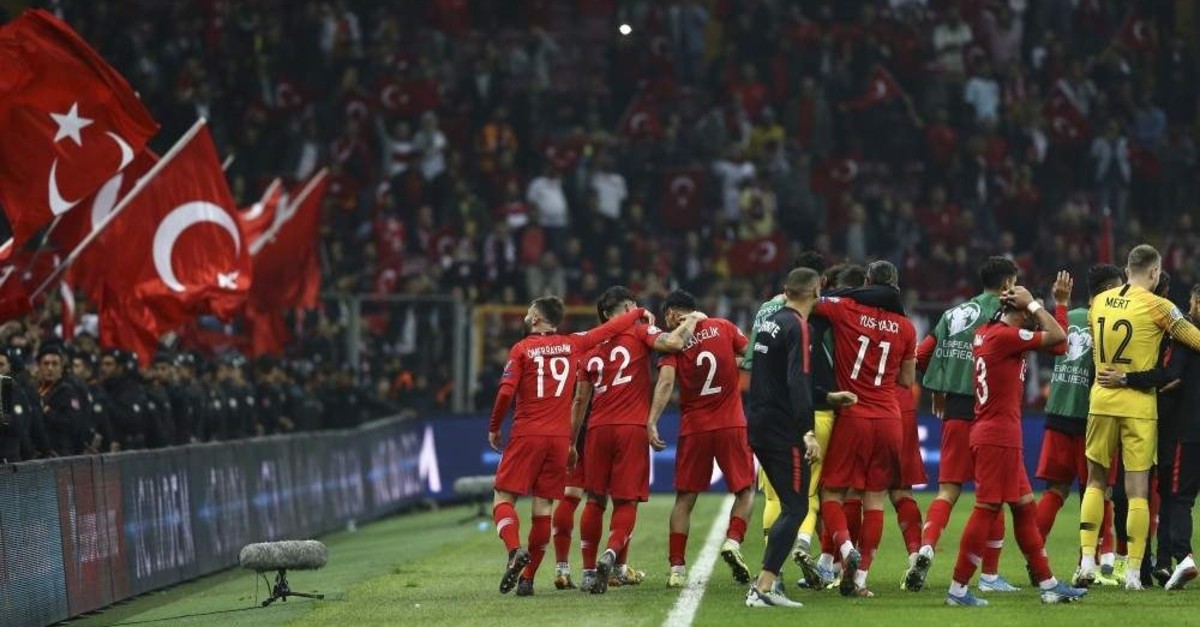 Turkey punched their ticket to the Euro 2020 finals with a goalless draw against Iceland in Istanbul on Thursday, securing a place with one game remaining.

Both teams struggled to make an impact with Turkey striker Burak Yılmaz failing to find a way past Iceland keeper Hannes Halldorsson in the first half. Turkey pressed harder in the second half, but Iceland's defense kept them from scoring.

Midfielder Ozan Tufan came close to scoring in the 63rd minute but his effort brushed past the crossbar, while Yusuf Yazıcı almost won the match in dramatic style when his daring lob beat Hannes Halldorsson but grazed the bar during injury time.

Iceland also missed a chance to score in the closing stages when Hordur Magnusson's header was blocked by Turkey defender Merih Demiral on the line.

Hailing Iceland's respectable effort, Turkey's coach Şenol Güneş said it was a difficult game. "We played without taking any risks. It was a stale game as our goal was to qualify, not to win the match," Güneş said.

Calling the qualification a great achievement, Güneş said the championship would be a great test for the team's preparedness for the World Cup. "The European tournament will be a test for us. Players will learn to accept defeat as you can't always win. For me, the real goal is the World Cup. I believe we will achieve greater results at the World Cup. It will be great if we can achieve such a success for the second time," he said.

Former national team goalkeeper Güneş took Turkey to third place at the 2002 World Cup during his first spell as manager between 2000 and 2004, and guided his team to qualification with relative ease, beating and drawing with France and losing only one match.

That upturn in form comes after a dreadful slump under previous coach Mircea Lucescu that saw Turkey fail to qualify for the last year's World Cup in Russia and was relegated to third-tier League C in the UEFA Nations League.

"We are so happy that we have qualified for the Euro. Now we have one more game to play, and then we'll focus our clubs until March," said Turkey's Leicester defender Cağlar Soyuncu.

Turkey placed second in Group H with 20 points, while Iceland needed to win to have any chance of qualifying thanks to their inferior head-to-head record with the French but will now have to hope they make the playoffs at the end of the qualifying phase.

"We came here four points adrift, and Turkey is such a strong team. We did everything we could," said Iceland forward Mikael Anderson. "We came close to getting the result we wanted, but it wasn't enough."

Elsewhere in the group, France's efforts to celebrate their qualification were almost spoiled by Moldova, with an Olivier Giroud penalty sparing their blushes as they came from behind to win 2-1 and advanced to the top of Group H.

Moldova took the lead in the ninth minute when France defender Clement Lenglet followed up a bad defensive header with an even worse one, giving Moldovan striker Vadim Rata the chance to poke the ball home.

France equalized in controversial circumstances in the 35th minute as Giroud contested with Moldova keeper Alexei Cosele for a freekick lifted into the box, forcing Cosele to spill the ball for Raphael Varane to head into an empty net.

Despite the glittering array of attacking players at their disposal, France struggled to break down the dogged Moldovans, and it took a 79th-minute Giroud penalty for a foul on Lucas Digne to secure the three points.

In other games, Portugal captain Cristiano Ronaldo scored another treble, moving closer to 100 international goals, as he led the European champions to a 6-0 drubbing of Lithuania. Ronaldo, whose hat trick was the 55th of his career and ninth for Portugal, has 98 goals and could become only the second player to score a century for his country after Iran's Ali Daei.

The European champions, however, were left waiting to secure a place at the finals after Serbia beat Luxembourg 3-2. Portugal is in second place with 14 points, one ahead of Serbia, and will qualify if they win in Luxembourg on Sunday. The leader Ukraine has already qualified.

England has booked its place in the finals as group winners with a crushing 7-0 victory over Montenegro in Group A. Harry Kane moved into sixth in the all-time list of England goal scorers with a first-half hat trick to take his tally for the qualifying campaign to 11 in seven games.

Also in Group A, the Czech Republic advanced in the tournament by coming from behind to beat Kosovo 2-1 as Alex Kral scored one goal and set up another to give the hosts the second spot in the group.
Last Update: Nov 15, 2019 1:57 pm
RELATED TOPICS