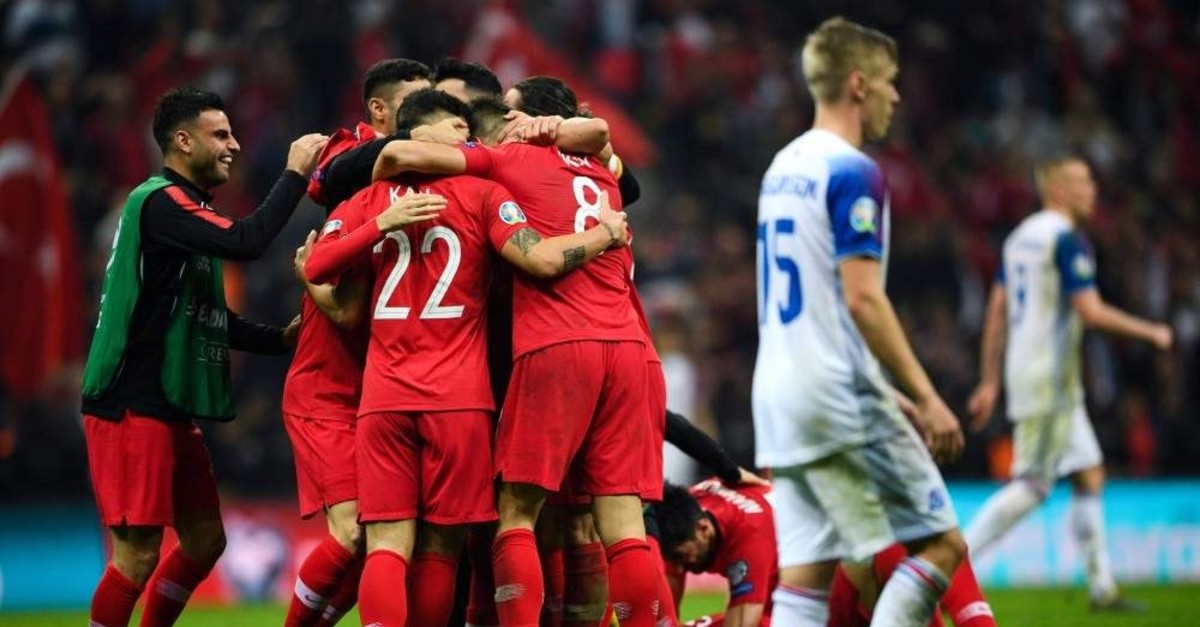 Turkey's players form a circle while celebrating after the match against Iceland in Istanbul, Nov. 14, 2019. (AFP Photo)
by Arda Alan Işık Nov 15, 2019 1:47 pm
Turkey did what they do best in this qualification period so far by not allowing a surprise against Iceland and getting the EURO 2020 ticket. This is quite new for the Turkish national team as they have rarely performed so consistently in recent years. Nevertheless, manager Şenol Güneş and his crew made a surprising leap after two frustrating years in Beşiktaş and made the Turkish national team one of the most consistent teams of the qualifiers. Even though the results already speak for themselves, 20 points in nine games while conceding only three goals, what was really promising was the gameplay throughout this journey. Maybe for the first time in history, Turkey achieved success through a solid defensive system without relying mostly on talented players creating miracles.
That is why this time Turkey’s journey to success was much more confident and reliable than previous ones, which were more like mission impossible blended with chaos and miracles. This time the Turkish national team invested in a strategy and stayed with it without making erratic choices every game. This allowed the players to grasp the ideas of Güneş better and be able to execute it faster. As the game of football is ruled by the ability to execute complex movements in high speed, this was the right recipe for success. The less the players had to think about their next move in the game, the more confident they grew with their movements on the pitch.
However, to achieve this, manager Güneş first needed a young, open-minded team that could internalize his strategy. Also for the first time in history, the national team was made up of unsung heroes rather than dominant, macho figures. Therefore, there were no conflicts among the players or between the players and the media, which had been a chronic problem for Turkish for many years. Furthermore, this strengthened the bond between the Turkish public and the national team, which had deteriorated due to absurd events like Volkan Demirel leaving the pitch due to protests or Arda Turan trying to beat a journalist on the plane.
Without all of this drama and with a proper defensive strategy, the Turkish national team has become one of the most reliable teams in Europe in just eight months. Of course, the real test starts from here but their ability to transform a dismal situation into a promising one should be inspiration for everyone in the football industry. The team did not need any superstars or the most talented offensive game in history to achieve this, only good work ethics and a solid defensive strategy. This proves that any team can achieve considerable success by implementing pure teamwork. The world of football has changed and the Turkish national team is not lagging behind.
Last Update: Dec 20, 2019 1:42 am
RELATED TOPICS