The next stage will be more challenging for Turkey 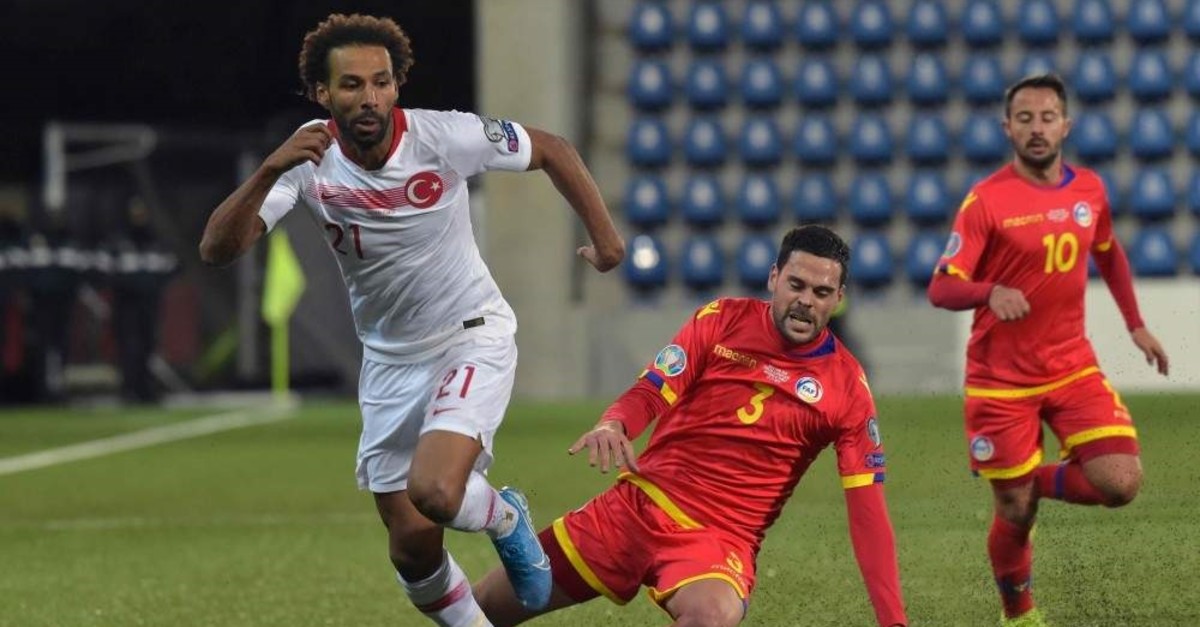 Turkey's Naz?m Sangare fights for the ball with Andorra's Marc Vales during the Euro 2020 qualifier match, Nov. 17, 2019. (AFP)
by Arda Alan Işık Nov 18, 2019 4:55 pm
Who could have thought before the qualifiers that Turkey will show the same defensive performance as a defense legend like Italy? As this piece was written, Turkey and Italy had both conceded only three goals in the qualifiers so far, but Italy may concede even more against Armenia. Both teams had similar opponents, except the fact that Italy did not have an opponent like France in its group. Added to that, considering their defensive legacy and their incredibly talented defenders like Chiellini and Bonucci, it is almost a miracle that Turkey showed the same defensive performance as Italy. Now, this successful defensive approach will face tougher opponents in EURO 2020, opponents that can play both offense and defense effectively. That is why improvements, especially on the offensive side, are necessary to climb at least to the quarterfinals.
Turkey performed the best it could with a defensive strategy in the qualifiers and it would be illogical to expect them to show an equally good offensive performance. The wisest way to build collective action models is by implementing defensive tactics, as they are easier to learn and to execute compared to more complex offensive tactics. That is what Şenol Güneş did and now he has a team that knows how to play together, which is the common ground of all successful teams.
However, when you look at the potential opponents of the Turkish national team, you would see that there are some opponents that can both defend and attack better than Turkey. Teams like Belgium, Spain, England, Portugal, Croatia, Italy, Germany and the Netherlands are all potential opponents of Şenol Güneş’s team. Against these teams a purely defensive strategy would not work as they can execute complex offensive tactics to open up defensive teams. Nevertheless, it is equally dangerous to recode the fundamentals of the team and try to create a sophisticated offensive strategy. Güneş does not have enough talented players and time to do so, and if the team fails to achieve this goal, all the motivation and confidence gathered in the last eight months would be wasted.
So what can the national team do to add a bit of offensive consistency to their game? I argue that Turkey can have an intimidating offensive power with slight changes in the way it conducts its attacks. Firstly, Güneş should give up his completely chaotic approach and take some responsibility in creating set-pieces. What creates the difference between complex and dangerous strategies is that Güneş does not have to plan a possession game, and that is not what Turkey needs to play. What Güneş should create is a transition game, a game that is focused on the moment that the ball is intercepted.
Güneş has talented players to do this, like Yusuf Yazıcı, Hakan Çalhanoğlu and Emre Belözoğlu. These three players are capable of organizing the game and delivering precise balls to their teammates so they can have enough time and space to go the opponent’s penalty box. Against Andorra, Güneş tried Yazıcı and Çalhanoğlu in the midfield and it was a signal that he might use them with warriors like Ozan Tufan, Mahmut Tekdemir and İrfan Can Kahveci in the future. A stable core made up of warriors brought the team up to this point, but now the team requires a talented touch at the center of its game. A simple set-piece centered on either Yazıcı or Çalhanoğlu can improve offensive performances significantly. Of course, it means that Güneş has to sacrifice one defensive midfielder, but the lost defensive advantage is not even close to the gained offensive advantage. Without considerable offensive power, Turkey cannot force powerful opponents to divide their energy in both parts of the game. No team can achieve serious success without playing at least a minimally effective game on both parts.
Last Update: Dec 20, 2019 1:46 am
RELATED TOPICS