Turkey wraps up Euro 2020 with win over Andorra 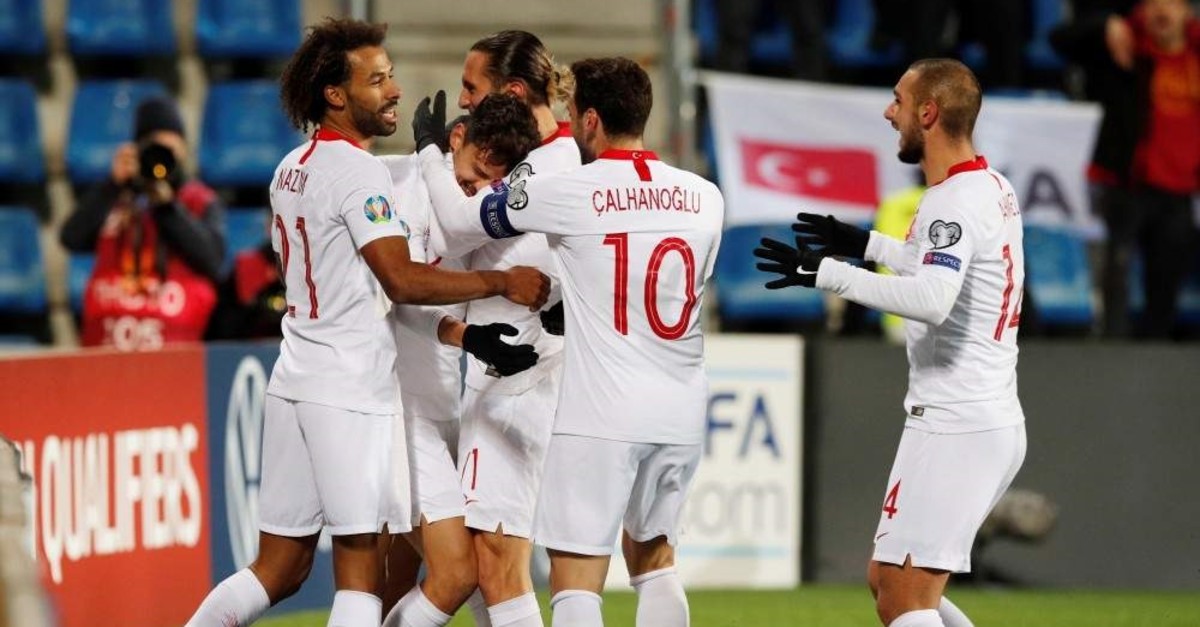 With only one loss and three goals conceded, Turkey's campaign marked its best-ever performance in any Euro qualification round

The Turkish national team brought its successful Euro 2020 qualifying campaign to a conclusion with an easy win over Andorra.
Enes Ünal’s first-half brace helped Turkey see Andorra off 2-0 away from home Sunday. “I always keep myself in shape. It doesn’t matter if I’m on the pitch or sitting on the bench. I always strive to help my team as best as I can,” Ünal said, after scoring his first goal for the national team.
The team completed its campaign with 23 points, losing only once and scoring 18 goals across 10 games.
It is Turkey’s defensive record, however, that stands out the most. Coach Şenol Güneş’s men allowed only three goals in 10 matches — two of them in the only defeat at Iceland and one in a tie with France. In fact, Turkey kicked off its journey to the Euros with three straight clean sheets, scoring eight goals in the meantime. By the end of the qualifiers, Turkish goalkeepers have kept their goal intact eight times.
The highlight of the qualification round for Turkey was undoubtedly its confident 2-0 win over world champion France in Konya. The French also failed to win at home, managing to gain only one point from its matches against Turkey.
The campaign marked Turkey’s best-ever performance in any Euro qualification round. Previous top performance was for the 2000 competition held in Belgium and the Netherlands. Turkey only lost once and tied twice back then as well, but in eight games, allowing the team to go into playoffs where it beat Ireland.
Turkish forward Cenk Tosun finished the qualification round as the second top scorer of Group H. The Everton striker found the back of the net on five occasions, one behind Olivier Giroud of France.
Hailing the teamwork among players, Güneş said the best was yet to come. “The team and the fans are in perfect harmony. This synergy reflects well to the pitch,” Güneş said and added that his ultimate goal was the World Cup.
Former national team goalkeeper Güneş took Turkey to third place in the 2002 World Cup during his first spell as manager between 2000 and 2004, and guided his team to qualification with relative ease, beating and drawing with France and losing only one match.
That upturn in form comes after a dreadful slump under previous coach Mircea Lucescu that saw Turkey fail to qualify for the last year's World Cup in Russia and was relegated to third-tier League C in the UEFA Nations League.
Euro 2020 will be Turkey’s fifth-ever and third consecutive appearance at the continental tournament. The team achieved its best result in 2008 when it made an incredible run of last-minute wins to the semifinals.
At the group stage draw held on Nov. 30 in Bucharest Turkey will be placed in the pot of third-seeded teams.
Elsewhere in the group, France wrapped up top spot in Group H as goals from Corentin Tolisso and Antoine Griezmann sealed a 2-0 win over Albania in Tirana.
The visitors made a quick start on the pitch, though, as Bayern Munich midfielder Tolisso headed Griezmann's free-kick into the bottom corner.
The Barcelona star slotted in the second himself on the half-hour mark, before the dead rubber petered out in the second period, with Olivier Giroud going closest to a third by striking the post.
In other games, Cristiano Ronaldo scored his 99th international goal as reigning champions Portugal secured their place at the Euro 2020 finals on Sunday with a 2-0 victory away to Luxembourg, while France ended their qualifying campaign with a victory.
Bruno Fernandes struck the opening goal on 39 minutes before Ronaldo tapped in a scrappy second late on to clinch second place in Group B behind winners Ukraine, who drew 2-2 in Serbia.
Iranian striker Ali Daei holds the world record with 109 international goals scored in 149 appearances between 1993 and 2006. "All records must be broken and I will beat that record," said Ronaldo.
Last Update: Dec 20, 2019 1:45 am
RELATED TOPICS