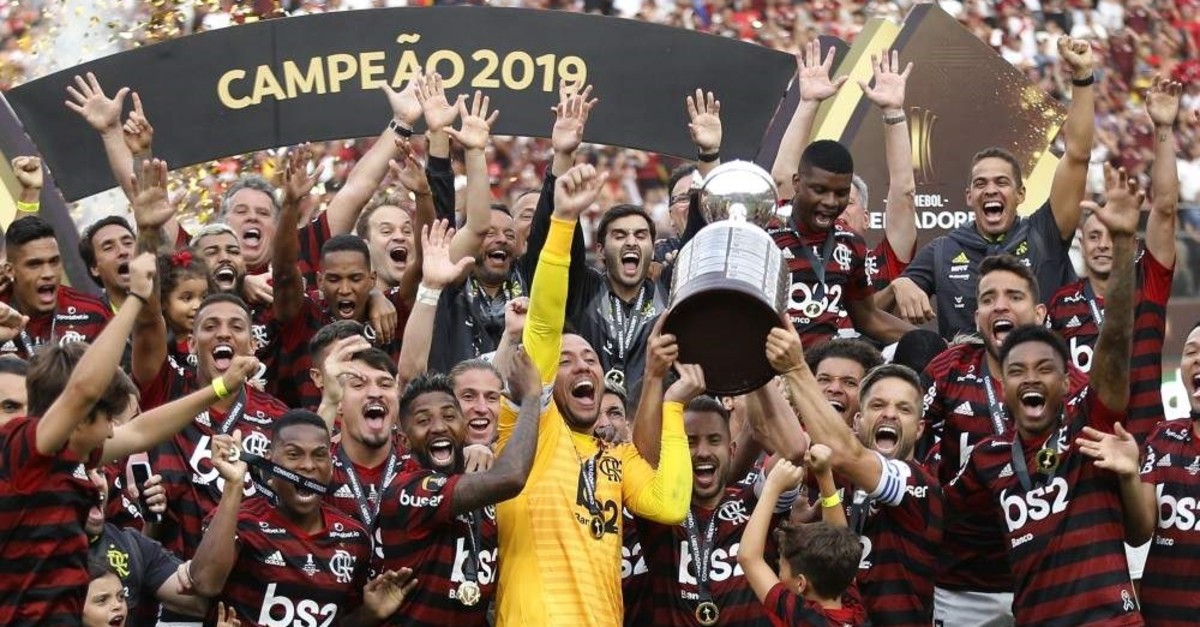 Players from Brazil's Flamengo celebrate on the podium with the trophy after winning the Copa Libertadores final football match by defeating Argentina's River Plate, at the Monumental stadium in Lima, on November 23, 2019. (AFP Photo)
by Nov 25, 2019 4:18 pm
A day after winning their first Copa Libertadores in 38 years, Flamengo completed a rare double on Sunday when they secured the Brazilian league title after closest challengers Palmeiras lost 2-1 at home to Gremio.
The result leaves Flamengo an unassailable 13 points ahead of Palmeiras with four games of the Serie A season remaining.
It is the seventh league title for the Rio de Janeiro club and completes a historic weekend, coming less than 24 hours after Gabriel Barbosa scored two goals in the closing minutes to give them a 2-1 victory over River Plate in the Libertadores final in Peru.
It is the first time that a Brazilian team has won both the league and the Libertadores in the same year since Pele's Santos achieved the same feat in 1963.
The Flamengo players had driven through the center of Rio on an open-top lorry earlier on Sunday to celebrate the Libertadores victory and they did not need to kick a ball for their celebrations to double.
Defending league champions Palmeiras had to beat Gremio to keep their slim title hopes alive but although Bruno Henrique equalised Everton’s 69th minute opener for Gremio, Pepe stepped up in stoppage time to give the visitors all three points.
Flamengo have 81 points from 34 games; Palmeiras are joint second with Santos on 68 points.
The win completes a phenomenal year for a club that has gone 26 games unbeaten since losing on the first weekend of August.
Under Portuguese coach Jorge Jesus, who has quickly become a cult figure, Flamengo have overran opponents with a high intensity pressing game and all-out attack spearheaded by prolific scorers Barbosa and Bruno Henrique.
Barbosa, who is on loan from Inter Milan, is the top goalscorer in both the Libertadores and Serie A, while Bruno Henrique was named the Best Player of the 2019 Libertadores on Sunday.
Flamengo now have four league games remaining before turning their attention to the Club World Cup in Qatar, where they could face Liverpool, the team they beat to win the Intercontinental Cup in 1981.