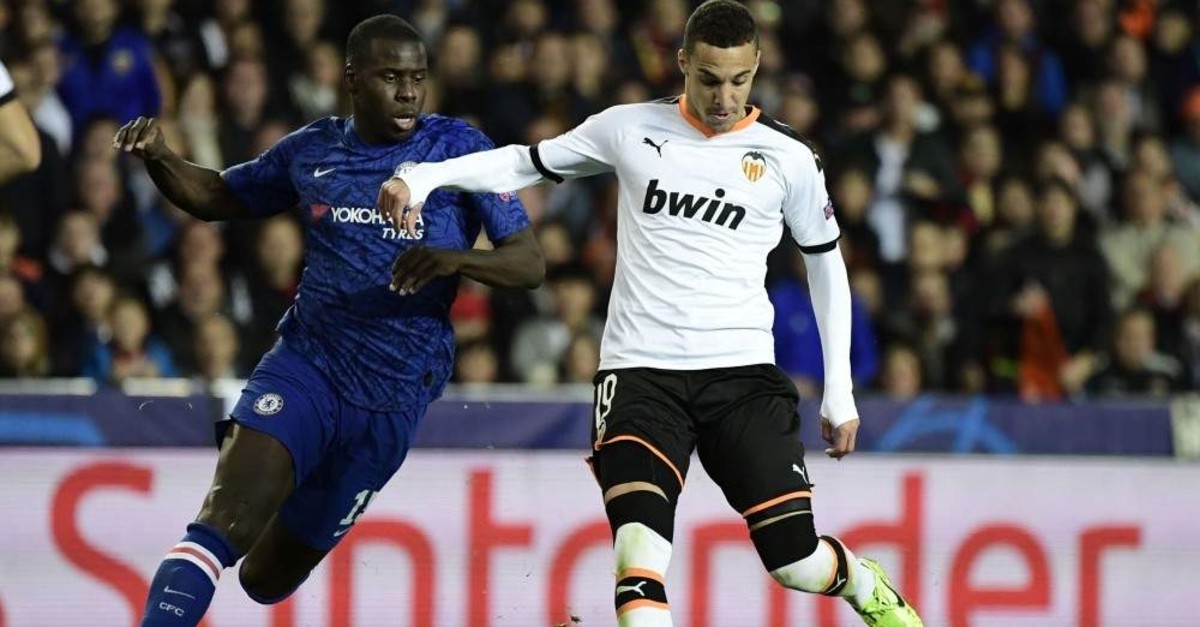 Chelsea's French defender Kurt Zouma (L) vies with Valencia's Spanish forward Rodrigo Moreno during the UEFA Champions League Group H match in Valencia, Nov. 27, 2019. (AFP Photo)
by Nov 27, 2019 11:15 pm
Chelsea will have to wait to book their place in the Champions League knockout stage after a freak goal from Valencia's Daniel Wass denied them victory in an epic 2-2 draw on Wednesday in which the Spaniards missed a glut of clear chances.
Victory for either side would have sent them through and Valencia went ahead at Mestalla when Carlos Soler scored in the 40th minute after team mate Maxi Gomez had missed two gilt-edged chances, but Mateo Kovacic levelled for Chelsea two minutes later.
Chelsea's top scorer Tammy Abraham was carried off on a stretcher with a serious-looking injury before halftime but Christian Pulisic put Frank Lampard's side ahead in the 50th minute after a lengthy VAR review ruled him onside.
Valencia forward Rodrigo Moreno missed an open goal later in the half and then captain Dani Parejo was denied from the penalty spot by Chelsea keeper Kepa Arrizabalaga.
The Spaniards eventually levelled in the 82nd minute with a remarkable goal from Danish midfielder Wass, who looked set to cross from the right wing but instead flummoxed Arrizabalaga by firing a shot across goal which bounced off the far post and into the net.
Valencia should have won the game in added time when Rodrigo failed to connect properly with a cross from close range.
The draw means both sides are on eight points after five games but Valencia have a better head-to-head record and they lead Group H, with Ajax Amsterdam third on seven points but with a chance to go top when they visit Lille later on Wednesday.
In Group G, Zenit St Petersburg secured a 2-0 home win over Olympique Lyonnais thanks to goals by Artem Dzyuba and Magomed Ozdoev to stay in the hunt for a place in the knockout stages.
Zenit climbed into second place in the group on seven points from five games, above third-placed Lyon who also have seven but trail the Russian side because of an inferior head-to-head record as they drew 1-1 in the reverse fixture.
Iran forward Sardar Azmoun hit the post for Zenit before the towering Dzyuba broke the deadlock in the 42nd minute, when he headed a Douglas Santos corner past goalkeeper Anthony Lopes.
Zenit were forced to defend desperately at times after the break as Lyon pressed but the home side packed their midfield and held firm, denying the French side any clear chances.
With Lyon running out of steam, Ozdoev sealed Zenit's win with a deflected 84th-minute shot from 18 meters, as his fierce half-volley clipped Marcelo's heel and sailed into the back of the net past the stranded Lopes.
Group leaders RB Leipzig, who have nine points from four games, host bottom team Benfica (three points) later on Wednesday.