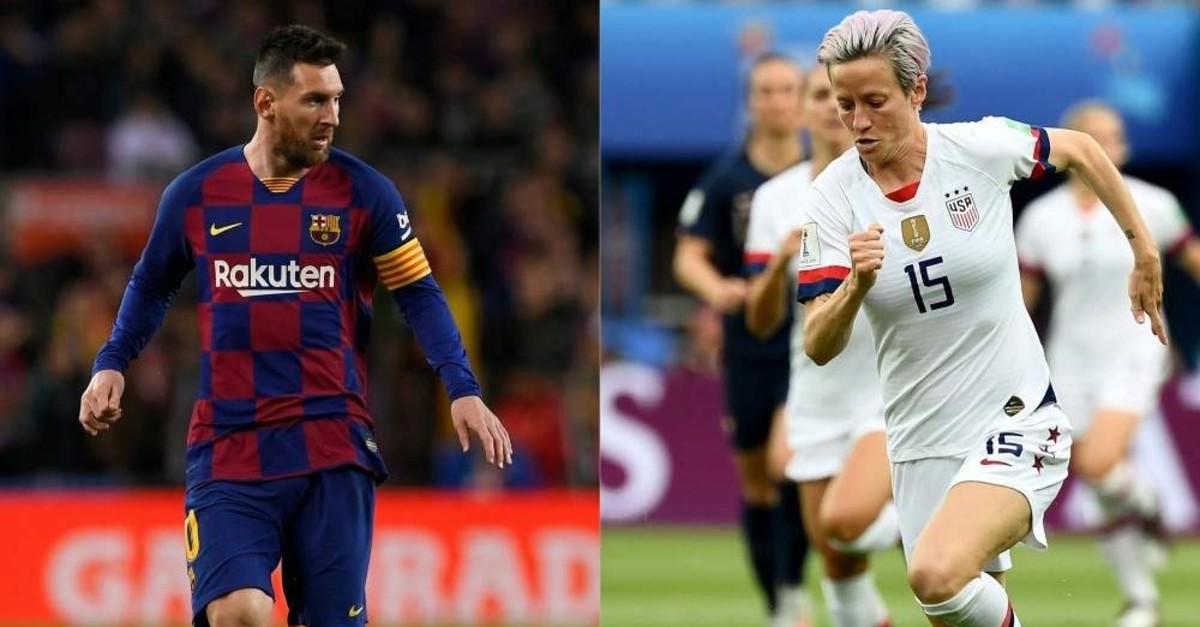 | AFP Photo
by Dec 01, 2019 3:12 pm
The biggest names in world football will descend on Paris on Monday for the 2019 Ballon d'Or ceremony, with Lionel Messi and U.S. women's World Cup superstar Megan Rapinoe tipped to leave with the honors.
It would be an enormous shock if Rapinoe did not depart the Chatelet Theatre with the women's prize as she returns to the country where she was the driving force on and off the field for the United States as they retained their title.
The suspense surrounds the identity of the men's winner, 12 months after Croatia's Luka Modric claimed the crown thanks to his exploits in dragging his country to the World Cup final and winning the Champions League with Real Madrid.
That ended a decade in which Messi and Cristiano Ronaldo had won the Ballon d'Or five times each, but the smart money now is on the Barcelona man claiming number six.
There are 30 nominees in total for the prize, organized by France Football magazine and voted for by 180 journalists from around the world.
The case for Van Dijk
Among the names is Ronaldo, as well as several of the stars of the Liverpool side who won the Champions League, chief among them Dutch defender Virgil van Dijk.
At one point he looked like the favorite, but Messi already pipped him to FIFA's The Best title in September.
The 32-year-old top-scored in La Liga last season with 36 goals as Barcelona won the title. He did not have a great Copa America with Argentina, but his genius is undeniable.
"If you give the Ballon d'Or to the best player of this generation then you should give it always to Lionel Messi. That's how it is," admitted Liverpool manager Jurgen Klopp.
"But if you give it to the best player of last season, then it was Virgil van Dijk. I don't know exactly how it will work but that is how I see it."
The value of individual honors in football is debatable, and the timing unsatisfactory, coming midway through the European club season.
Yet surely nobody could suggest Rapinoe would not be a deserving winner of just the second women's Ballon d'Or, an award voted for by a panel of 48 journalists.
Norway's Ada Hegerberg won it in 2018 but will not retain her title after missing the World Cup.
Among the stars of that tournament to be nominated are England's Lucy Bronze, Netherlands striker Vivianne Miedema, Australia's Sam Kerr and the U.S. trio of Alex Morgan, Rose Lavelle and Tobin Heath.
However, Rapinoe, the 34-year-old feminist icon and outspoken critic of U.S. President Donald Trump, should add this honor to those of Golden Boot winner for top scorer and Golden Ball for best player at the World Cup.
Even her supposed rivals seem to be rooting for her.
"She does lots of things off the pitch, but I think she is the favorite to win the Ballon d'Or mainly down to her performances during the World Cup," Bronze told France Football
Last Update: Dec 20, 2019 2:03 am
RELATED TOPICS