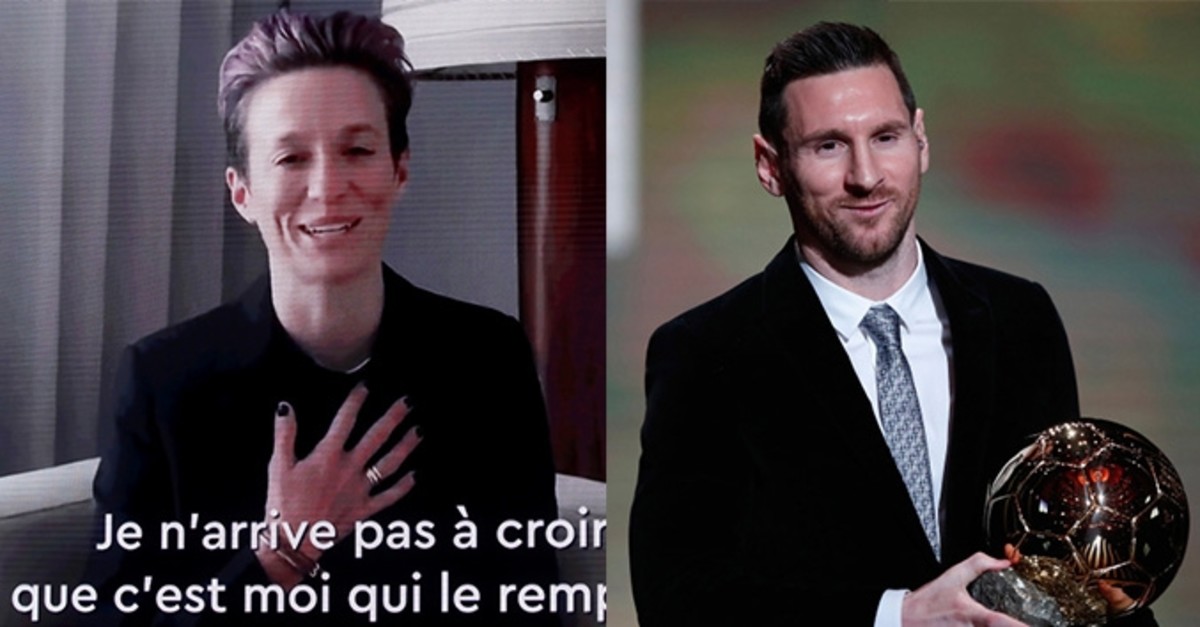 Lionel Messi said he hoped to carry on undimmed by age after claiming a record sixth men's Ballon d'Or award at the age of 32 in Paris on Monday, while USA World Cup superstar Megan Rapinoe took the women's prize.

Rapinoe was not at the Chatelet Theatre in the French capital, unable to make the trip back to the country where she led the USA to victory in July. However, Messi was there with his wife, Antonella Roccuzzo, and two of their children. It is Messi's first Ballon d'Or since 2015 and his sixth overall as he moves one ahead of old rival Cristiano Ronaldo. "It is 10 years since I won my first Ballon d'Or here in Paris and I remember coming here with my three brothers. I was 22 and it was all unthinkable for me what I was going through," Messi said on stage after receiving the award from last year's winner Luka Modric. "I hope I have several years left to keep enjoying my football. I am aware of the age I have and these moments are all the more enjoyable because the moment when I have to retire is getting closer and that is difficult. If all goes well I'll have several years left but at the moment time seems to be flying and everything is happening very quickly. I hope to keep enjoying my football, my family, facing my rivals and all of this life that I have."

The Barcelona No. 10 won this year's prize, organized by France Football magazine and voted for by a panel of journalists from around the world, ahead of Liverpool defender Virgil van Dijk, with Ronaldo third. It is the first time since 2010 that Ronaldo has failed to rank in the top two. Having starred in the Liverpool team that won the Champions League, Van Dijk finished second to Messi just as he did in the voting for FIFA's equivalent prize, The Best, in September. "Unfortunately there are a couple of players like him who are a bit unnatural. Six times Ballon d'Or – you need to respect greatness as well," said Van Dijk. Van Dijk was one of the four Liverpool players in the top 10, with Sadio Mane fourth, Mohamed Salah fifth and goalkeeper Alisson seventh. The latter won a new prize for the goalkeeper of the year, named after former USSR icon Lev Yashin.

Messi has scored 46 goals in 54 matches so far in 2019, and netted 36 times in 34 La Liga matches last season as Barcelona won the title. He did not enjoy a successful Copa America with Argentina but was also the top scorer in last season's Champions League with 12 goals. As if any reminder of his brilliance were required, on Sunday he scored a wonderful late winner for Barcelona against Atletico Madrid.
Dutch defender Matthijs de Ligt, the ex-Ajax star now at Juventus, succeeded Kylian Mbappe as the winner of the Kopa Trophy for the best player aged under 21.

This is just the second year that a women's Ballon d'Or, voted for by 48 journalists, has been awarded, with Rapinoe succeeding Norway's Ada Hegerberg. Rapinoe was the star of the Women's World Cup on and off the field, winning the Golden Boot for top scorer with six goals, and Golden Ball for best player. She scored the opening goal as the USA beat the Netherlands 2-0 in the final. But the 34-year-old feminist icon made headlines with her outspoken criticism of U.S. President Donald Trump during the tournament and has led calls for her team to be paid the same as their male counterparts.
"It's been an incredible year," said Rapinoe in a recorded video message. "I want to say a huge thank you to my teammates, the coaches, the U.S. Soccer Federation, for all of the support to allow me to be who I am and do what I do on the field but also be the person who I am off the field." Rapinoe was one of four members of the U.S. side that lifted the World Cup to be nominated for the prize, along with Tobin Heath, Rose Lavelle and Alex Morgan, who finished third on Monday. England's Lucy Bronze came in second.