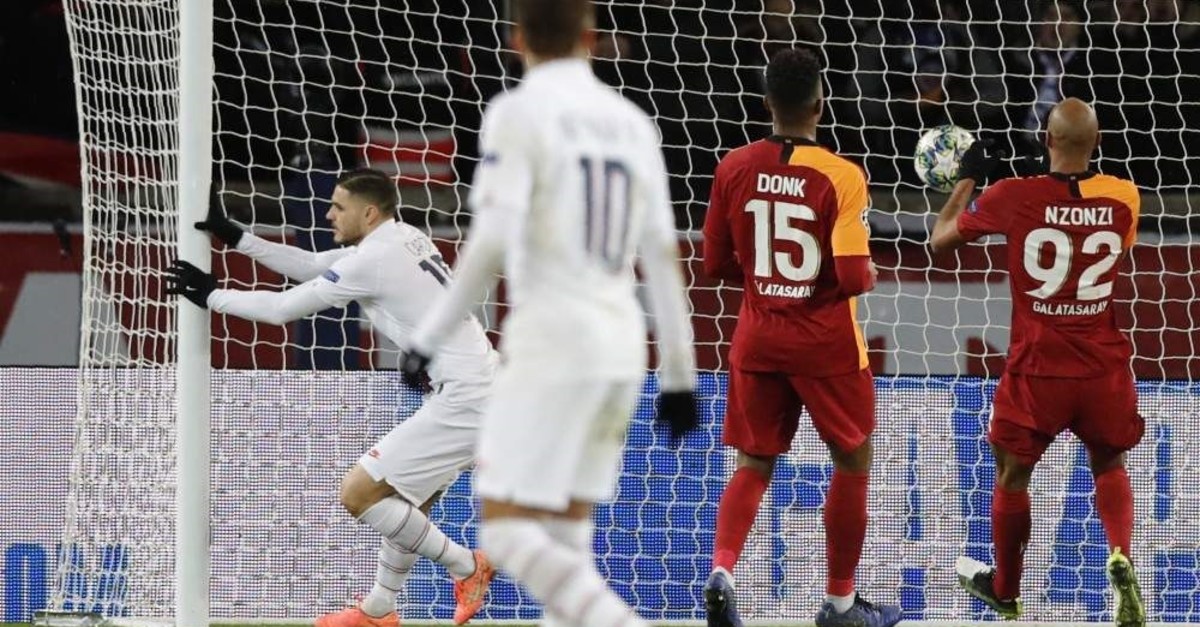 Galatasaray players watch as PSG's Icardi scores the opener in Paris, Dec. 11, 2019. (AP Photo)
by Daily Sabah with Agencies Dec 12, 2019 1:52 pm
Kylian Mbappe and Neymar were at their brilliant best as Paris St. Germain demolished Galatasaray 5-0 in their final Champions League Group A game at the Parc des Princes on Wednesday.
Both Mbappe and Neymar scored one and set up two other goals as the French champions, who had already made sure they would end the group phase on top, finished with 16 points, five ahead of Real Madrid after the 13-time champions beat Club Brugge 3-1 in their away matchup.
Galatasaray, who also conceded goals by Pablo Sarabia, Mauro Icardi and Edinson Cavani and ended with two points, were eliminated from all European competitions.
PSG and Galatasaray fans clashed briefly before kickoff outside the stadium with one supporter being taken to the hospital with a minor injury, a police source said. Despite having midfielder Marco Verratti and keeper Keylor Navas on the bench and Angel Di Maria out with a last-minute injury, PSG dominated and were rewarded in the 32nd minute.
Neymar played Mbappe through and the French international flicked the ball into the path of Icardi who poked home the ball to put the hosts ahead with his fifth Champions League goal this season -- his 12th in his last 13 games in all competitions.
Sarabia made it 2-0 three minutes later with an angled shot after being set up by Neymar. The Brazilian found the back of the net himself two minutes into the second half with a left-footed strike into the far corner after being set up by a Mbappe backheel.
Mbappe, who has now scored 19 goals and set up 11 in 30 Champions League games, increased the advantage in the 63rd with a cool finish from another Neymar assist. Fan-favorite Cavani, who came on as a second-half substitute, rounded it off with a penalty in the 84th minute after Ryan Donk had brought down Mbappe.
Speaking at the press conference after the match, Galatasaray coach Fatih Terim called the match a “bitter goodbye.”
“It was a bitter goodbye. I wish it didn’t end like this. They are better than us and they compete on another level, we need to admit that,” he said and added that they will turn their focus back to the Turkish Süper Lig.
“We hope to finish the league several points ahead of the rest, like last year. We believe we can do it. I’m not going to point any fingers or blame anyone. If there is someone at fault, that person is me. The players are blameless, they gave it their best. Our opponent was simply better than us,” Terim said.
Last Update: Dec 20, 2019 2:20 am
RELATED TOPICS