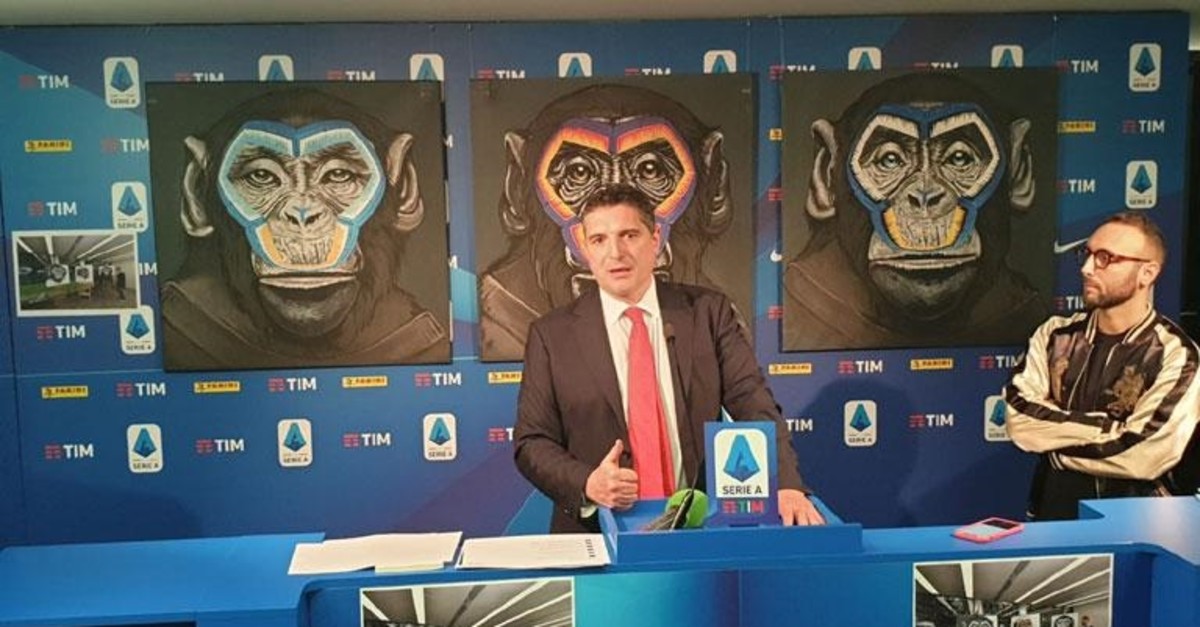 The league said the paintings by Italian artist Simone Fugazzotto would be exhibited permanently at the entrance to its main hall "to underline the commitment of the world of football against all forms of discrimination."

It said the artwork "aims to spread the values of integration, multiculturalism and brotherhood."

Milan-born Fugazzotto, said to be "known for his disruptive works," is famous in Italy and almost all his art involves drawings of chimpanzees.

He said he got the idea for the paintings after Napoli's Senegalese defender Kalidou Koulibaly was the target of racist insults during a match at Inter Milan last season.

"I got so angry that ... I got an idea. Why not stop censoring the word monkey in football but turn the concept around and say instead that in the end, we're all apes?" he said.

"Because if we are human beings, monkeys, reincarnated souls, energy or aliens who cares. The important thing is to hear the concept of equality and brotherhood," Fugazzotto said.

Italian football has been plagued by racism with Inter Milan Belgium forward Romelu Lukaku and Brescia's Italian striker Mario Balotelli having been subjected to racist insults from rival fans during matches this season.

A veteran Italian pundit was dropped from a Sunday night round table program after suggesting Lukaku could only be stopped by giving him bananas to eat, while Brescia's president said Balotelli’s problem was that he was “black” and he was “trying to get whiter.”

Both men said their comments were not intended to be taken seriously.

Earlier this month, Italian sports daily Corriere dello Sport used the headline "Black Friday" along with a picture of Lukaku and AS Roma's England defender Chris Smalling to preview last Friday’s match between their clubs in Milan. Despite a wave of criticism, the newspaper stood by the headline.

"We know that racism is an endemic and very complex problem, which we will tackle on three different levels," Serie A CEO Luigi De Siervo said on presenting the paintings.

"The cultural level, through works such as Simone's, the sports level, with a series of initiatives together with clubs and players, and the repressive level, thanks to the collaboration with the police," he added.