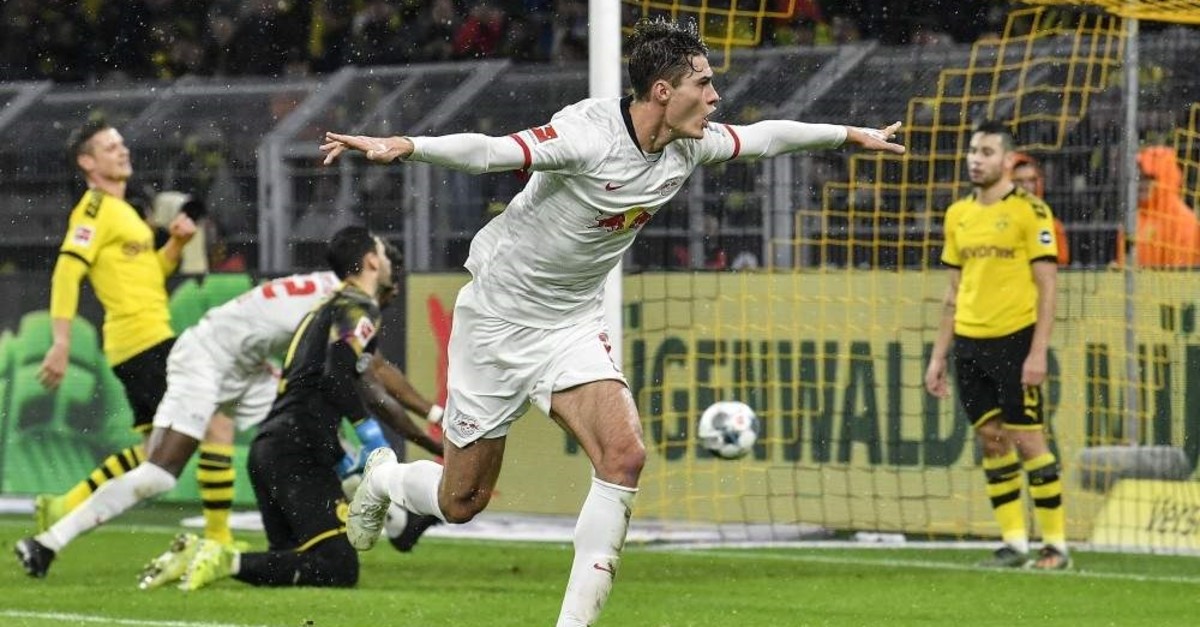 Borussia Dortmund squandered a two-goal lead to draw 3-3 with Bundesliga leaders RB Leipzig as a series of errors caused the Ruhr valley club to lose their grip on the game, leaving them four points behind in third place

Bundesliga leader Leipzig came from behind twice to grab a 3-3 draw at Borussia Dortmund Tuesday, aided by the home side’s mistakes.

Dortmund goalkeeper Roman Bürki, midfielder Julian Brandt and defender Raphaël Guerreiro were at fault for each of the visitors’ goals, as Dortmund missed a chance to close the gap at the top to one point.

“When you’re leading 2-0, you hope to bring it through to the end,” Bürki said. “Unfortunately we made it exciting again.”

Bürki denied Poulsen with a fine save, then Timo Werner with another from the resultant corner before the break.

But a bad mistake from the Dortmund keeper allowed Werner to score at the start of the second half, and another error from Brandt allowed the Leipzig forward to grab his second goal to draw the visitors level in the 53rd.

“It’s a lucky point for us, but we don’t have to apologize for that,” Leipzig coach Julian Nagelsmann said.

Bremen, who hammered 6-1 at Bayern Munich on Saturday, is just two points away from the drop zone after being blown away in the opening period by a Mainz team who started the match just one place above it.

"It's my first hat-trick in top-level football so I'm very proud of myself," said Quaison. "It was a perfect evening for us."

The home side was behind 3-0 after just 19 minutes, with the visitors showing relentless energy that has escaped them for most of this campaign.

Quaison struck either side of its own goal twice from Bremen keeper Jiri Pavlenka, who was unlucky to concede after a clearance struck the woodwork and hit him on the back.

He completed his treble in the 38th minute, converting loose ball from a corner to make it 4-0 at the break.

Claudio Pizarro thought he had got one back for Bremen in the second half, however, his goal – which would have meant his 22nd consecutive Bundesliga season with at least one goal – was ruled out for handball.

Elsewhere, Augsburg put three past a struggling Fortuna Duesseldorf at home, to leave the visitors entrenched in the relegation playoff spot.

Philipp Max scored in the 32nd and 72nd minutes before Tin Jedvaj ended the discussion just after the hour mark.

Hoffenheim won 2-0 at Union Berlin through the second-half goals from Ihlas Bebou and Christoph Baumgartner.

Union Berlin’s hopes of a new Bundesliga record ended with a 2-0 loss to Hoffenheim.

After winning its previous four league games at home without conceding, Union was aiming for a fifth. No promoted side had ever managed that in the Bundesliga before.

Union had more of the ball but failed to create clear-cut chances and Ihlas Bebou fired Hoffenheim in front with a deflected shot in the 56th.

Union pushed hard toward the end, when Oliver Baumann made a fine save to deny Sebastian Andersson, but substitute Christoph Baumgartner secured the visitors’ win in injury time.