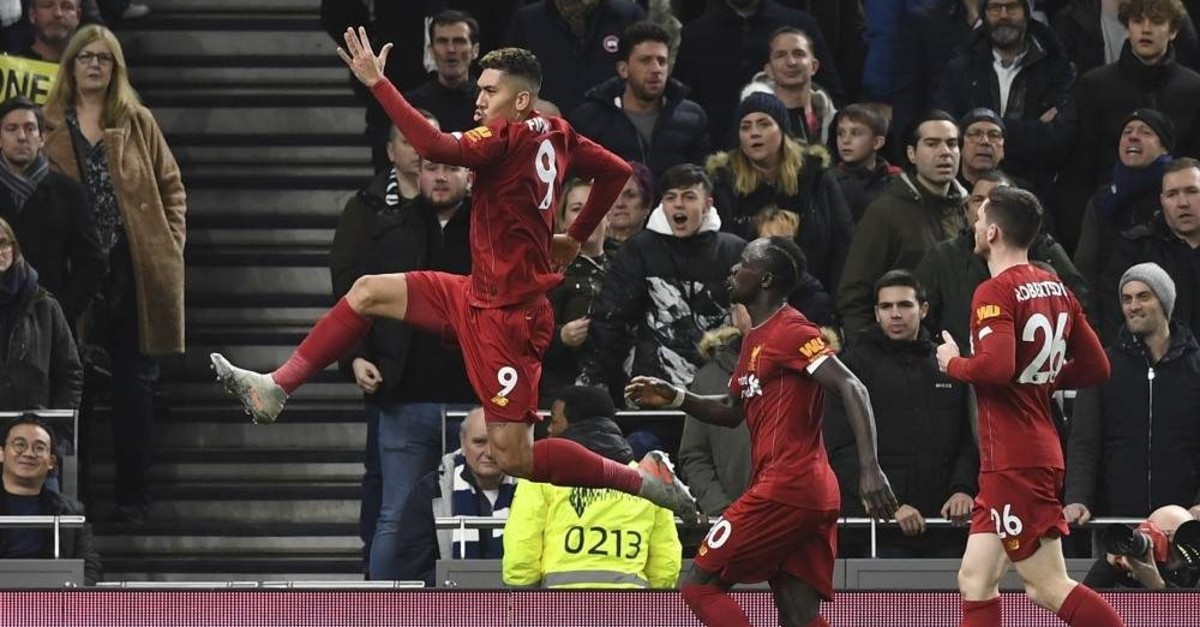 Liverpool players celebrate after scoring the opening goal against Tottenham in London, Jan. 11, 2020. (EPA Photo)
by Compiled from Wire Services Jan 17, 2020 10:21 am

While Manchester United, the only team to take points off Liverpool this season, will be looking to end its great rival's unbeaten run on Sunday, a 27-point gap will force fans to look elsewhere for thrills

In any normal year, the prospect of a Liverpool-Manchester United clash would capture most of the attention on any given Premier League weekend. But as the two sides prepare to meet at Anfield on Sunday, a whopping 27 points separate leader Liverpool from United in fifth.

The fact that the only two points Liverpool has dropped all season came at United might give Ole Gunnar Solsksjaer's side some hope. But with Liverpool set to be further strengthened by the return from injury of Fabinho, Joel Matip and Dejan Lovren, it is Juergen Klopp's side who will be the huge favorite to maintain its incredible streak.

The 1-1 draw between the teams in October was the only time the European champions have dropped points this season. They have now set a record for Europe's top five leagues, with 20 wins from their opening 21 games.

"Our team have a winning mindset. We always think about the next game, we don't look too far ahead," said Liverpool goalkeeper Alisson Becker, who has conceded just one goal in his past 10 games.

"We focus upon what is within reach at the time and we do everything possible to make sure we leave the pitch with a win and this has contributed to the great results this season," he said.

The Brazilian No. 1 will be confident of another clean sheet Sunday, with United's top scorer Marcus Rashford a serious doubt after lasting just 15 minutes as a second-half substitute in Wednesday's 1-0 win over Wolves in the FA Cup.

"I didn't want to play him, but we needed the win. It has backfired," admitted Solskjaer. "It looks like Joel will be in, it looks like Fabinho will be in maybe a day later, I'm not sure. Dejan, maybe he can be in as well," Klopp said. "That means a lot and helps massively of course. But we will see how it looks. The week is very important."

United could find itself eight points adrift of the top four by the time it kicks off at Anfield if Chelsea wins at Newcastle on Saturday.

A win for the Blues on Tyneside would also put Frank Lampard's men 12 points clear of Tottenham, unless Jose Mourinho's men can snap Watford's winning streak at Vicarage Road.

Only Liverpool and City have won more points in the six games since Nigel Pearson took charge of the Hornets, with 13 from their past five matches propelling them out of the relegation zone for the first time this season.

Spurs reduced a 12-point gap to Chelsea when Mourinho replaced Mauricio Pochettino in November down to three prior to their meeting a month later.

But they have won just one of their past five league games, leaving their chances of reaching the Champions League for a fifth straight season hanging by a thread.

While Liverpool will expect to make it 64 points out of 66 as it chases its first top-flight title since 1990, much of the attention will be on the other end of the table as bottom side Norwich host second-bottom Bournemouth.

Norwich goes into the game having been beaten 4-0 at Manchester United last time out, leaving them six points adrift and eight short of safety. Bournemouth has lost nine of its last 11 games to drop into the bottom three.

"We know that a game at Old Trafford is not a season-defining game for us, so we're not too down, we will keep on going," Norwich manager Daniel Farke said.

"We are definitely in the worst position but we're competitive (in most games). We are struggling with many injuries and we are realistic, we know that when you are not switched on, this can happen," he said.

Bournemouth manager Eddie Howe is under pressure after his side's terrible run of form.

"One result never dictates your season, but the group of results does. Unfortunately, we're in a difficult moment. We need to lift ourselves out," Howe said.