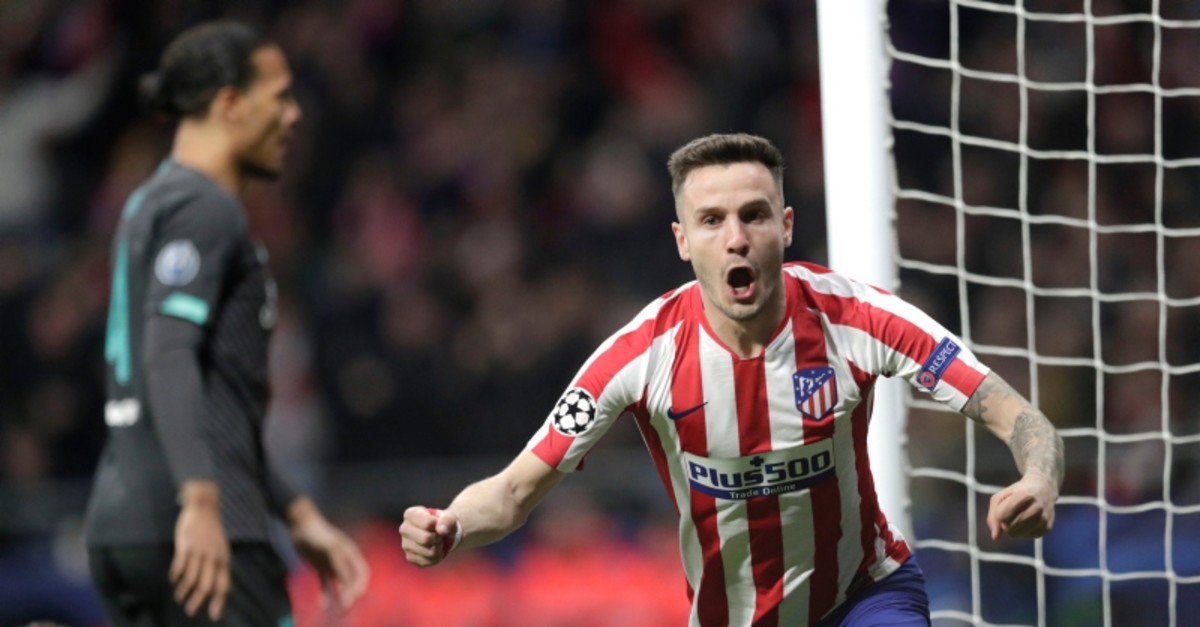 Atletico Madrid's Saul celebrates after scoring his side's first goal during a first leg, round of 16, Champions League match against Liverpool in Madrid, Feb. 18, 2020. (AP Photo)
by Associated Press Feb 19, 2020 8:32 am

Atlético Madrid's defense was back at its best on Tuesday, too good even for the European champions.

Atlético Madrid scored early and then defended superbly to beat Liverpool 1-0 in the first leg of the Champions League's round of 16 on Tuesday, spoiling the defending champion's return to the place where it won the European title last year.

Midfielder Saúl Ñíguez netted in the fourth minute and Atlético'sdefense kept Liverpool's powerful attack from having a single attempt on target, giving Diego Simeone's team the edge going into the second leg on March 11 in England.

"The concentration level of the Atlético defense was exceptional today," Liverpool coach Jürgen Klopp said. "I'm not disappointed with how we played. We were not good enough in the last third."

It was at Atlético's Wanda Metropolitano Stadium that Liverpool defeated Tottenham 2-0 last June to lift its sixth European Cup trophy. Tuesday's lineup was nearly identical for Liverpool, with defender Joe Gomez the only player who did not start in last year's final.

"It's not the best night ever because we didn't win a trophy," Simeone said. "But there are nights you don't forget. The best team in the world came here and we beat them. But it's only one game. We still have one to go."

Enduring one of its worst stretches under Simeone, Atléticocame in as a heavy underdog against the thriving European champions, who had not lost a game in any competition in 2020.

Liverpool controlled possession throughout but couldn't find a way to break through the tight Atlético defense.

It was only the second time that Liverpool failed to have an attempt on target under Klopp — the other coming in a 1-0 Champions League loss against Napoli in 2018.

"We had the ball most of the game," Liverpool defender Virgil van Dijk said. "We couldn't create massive opportunities, but we have another 90 minutes to set it straight and should be full of confidence."

Atlético pressed early and it didn't take long before itopened the scoring. Ñíguez netted from close range after picking up a loose ball inside the area following a corner. The ball appeared to touch Liverpool midfielder Fabinho before reaching Ñíguez for an easy goal.

Liverpool, which had not trailed in 15 matches in all competitions, quickly worked its way into the game but it took nearly half an hour for the visitors to havean attempt.

Atlético had a good chance to add to the lead in the 26th when striker Álvaro Morata, making his 50th Champions League appearance, had his shot blocked by Liverpool goalkeeper Alisson Becker.

Liverpool had a goal by Mohamed Salah ruled out for offside moments later, and the Egyptian again came close to equalizing in the 36th with a shot deflected by Atlético defender Felipe in front of the goal.

Atlético striker Diego Costa came off the bench in the 77th for his first appearance since undergoing surgery on a herniated cervical disc in November.