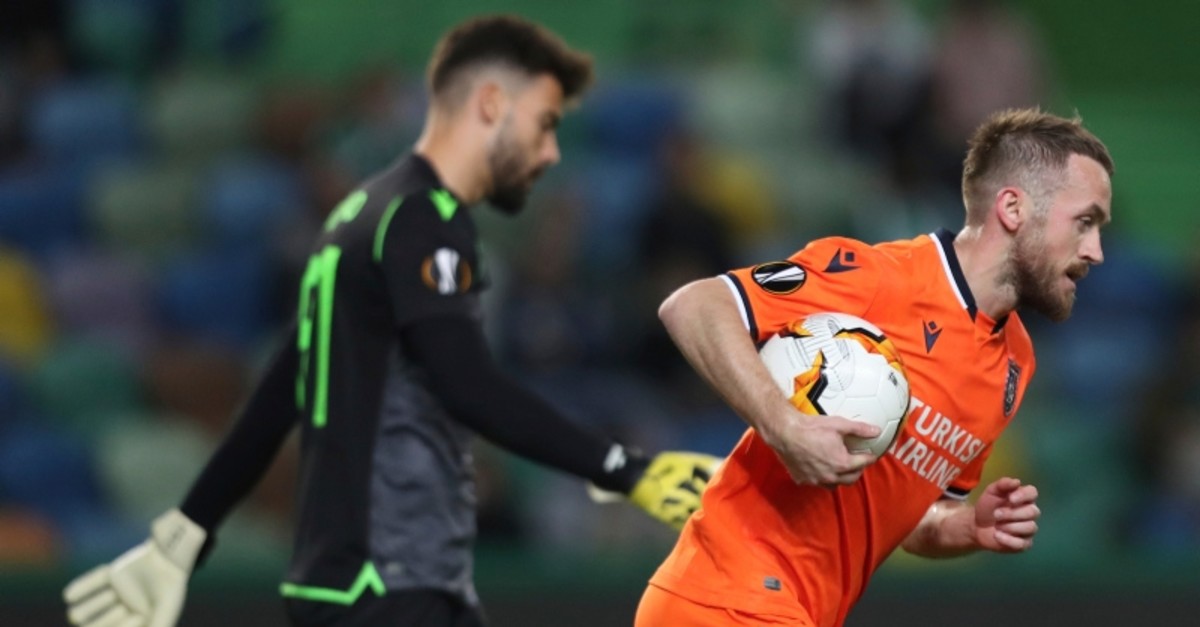 Bau015faku015fehir's Edin Visca holds a ball after scoring a penalty shot during the Europa League round of 32, first leg, soccer match between Sporting CP and Istanbul Bau015faku015fehir at the Alvalade stadium in Lisbon, Thursday, Feb. 20, 2020. (AP Photo)
by Compiled from Wire Services Feb 21, 2020 8:55 am

Portugal's Sporting CP defeated Istanbul Başakşehir 3-1 at home in the first leg of their round-of-32 meeting in the Europa League on Thursday.

Sporting captain Sebastian Coates scored the fastest goal of the night, netting in the third minute.

Striker Andraz Sporar scored from inside the penalty area right before halftime, assisted by Stefan Ristovski.

Argentine Luciano Vietto added another six minutes after the break.

Başakşehir forward Edin Visca converted a penalty in the 77th minute, giving the Turkish club a crucial away goal and hope for the second leg match at home in Istanbul.

Başakşehir is the only Turkish club still playing in European competitions.

Başakşehir qualified for the playoffs as the Group J winner with 10 points, while Sporting was the runner-up in the Group D with 12 points.

Meanwhile, Mikel Arteta marked his first European game as Arsenal manager with a 1-0 victory at Olympiakos in the first leg of their round-of-32 meeting in the Europa League on Thursday.

Manchester United was held to a 1-1 draw at Club Brugge, while Inter Milan had an easier time at Ludogorets in Bulgaria, with Christian Eriksen scoring his first goal for the Italian club in a 2-0 win.

Another Premier League side, Wolverhampton Wanderers, cruised to a 4-0 win over Espanyol thanks to a hat trick by Diego Jota and a spectacular long-range volley by Ruben Neves.

Winning the Europa League may be the best chance for all three Premier League teams to book a spot in the lucrative Champions League next season.

Scottish side Rangers delivered the comeback of the evening by rallying from 2-0 down to beat Braga 3-2 at home.

The second legs are scheduled for next week.