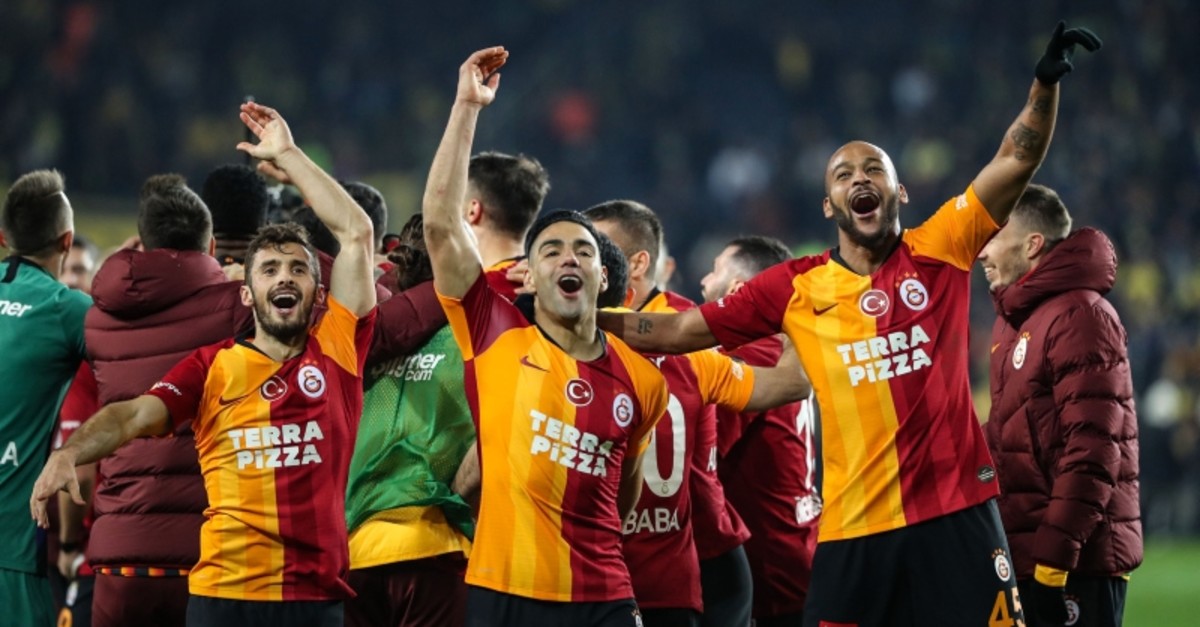 Istanbul heavyweights Galatasaray broke the Kadıköy jinx late Sunday, defeating archrival Fenerbahçe 3-1 in an away match. The win in the so-called Intercontinental Derby meant the Lions successfully hunted down the Yellow Canaries in the Ülker Şükrü Saraçoğlu Stadium for the first time since 1999.

Fenerbahçe managed to evade Galatasaray's strong start, eventually scoring their first goal after a penalty decision. Max Kruse made no mistake from the penalty spot in the 21st minute. But Galatasaray did not give up and found the equalizer in the 40th minute with a header goal by Ryan Donk, who set the first half's score.

Starting off the second half on the right foot, the Yellow Reds kept up with the rhythm and eventually got ahead when Colombian striker Radamel Falcao scored a penalty in the 80th minute. The derby's final goal came from Galatasaray's Nigerian forward Henry Onyekuru in stoppage time in the 97th minute, putting the finishing touch to seal the deal and ending a more than 20-year curse.

However, tensions flared as Fenerbahçe coach Ersun Yanal and his counterpart Fatih Terim were both booked. Yanal was sent off while Terim saw a yellow. The players, naturally, were not spared. Fenerbahçe's Deniz Türüç and Galatasaray's Younes Belhanda were both sent off after a brawl.

Since 1999, Fenerbahçe has dominated on its home turf, winning 15 derbies against Galatasaray. Eight games between the Istanbul clubs ended in a draw. Visitor Galatasaray was unable to score a win in 23 matches at Kadıköy, including 20 Turkish Süper Lig games, since December 1999. Fenerbahçe was also relentless when it faced Galatasaray at home, scoring 44 goals in 23 matches and conceding only 15.

Galatasaray earned its sixth consecutive win in the league and boosted morale before the derby while rivals Fenerbahçe dropped eight points in the last three league games. Galatasaray improved to 45 points, the same points as leaders Trabzonspor and third-placed Sivasspor. Meanwhile, Fenerbahçe remains in sixth place with 38 points.

Terim added that the results of the derby have affected their position in the standings. "It is not only three points for Galatasaray supporters. This score is also important to increase the energy and confidence of the players," he said.

Fenerbahçe's assistant manager Volkan Kazak also commented at the post-game press conference. "The referee's [controversial] decision is still under discussion. Galatasaray's Donk fouled to Serdar Aziz in the penalty area and the video assistant referee (VAR) was not used for this penalty position. Donk must have been sent off with a red card."

"My comments will not satisfy you. Our manager Ersun Yanal will hold a press conference within two days," he added.

The tensions of the derby were not limited to the pitch. Fenerbahçe Chairman Ali Koç, second-in-rank of Turkey's largest conglomerate who took over in the club presidency in June 2018, was seen fighting with fans inside the stadium following the match. Many fans chanted for both Koç and Yanal to resign. Koç made the headlines in the country after accusing the referees of impartiality and claimed political meddling.

A group of fans which gathered in front of Fenerbahçe's Samandıra training complex also chanted against the players and threw bottles and eggs to the team bus.