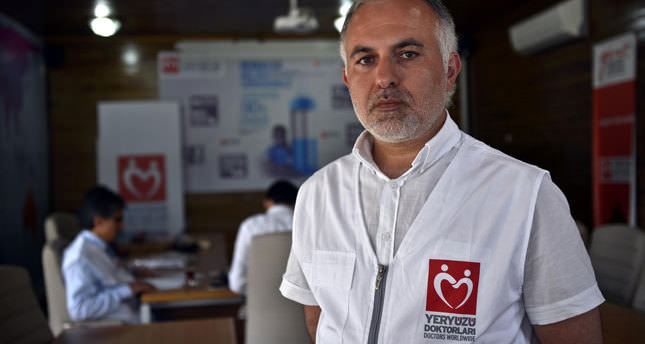 by AA Aug 25, 2014 12:00 am
Doctors Worldwide Association (YDD) will kick off a rehabilitation project for children who are the biggest victims of Gaza attacks and nearly 1,000 newly disabled people in the region to help them hold on to life. Speaking to Anadolu Agency (AA), board chairman of Doctors Worldwide Kerem Kınık, M.D. said they are working on a rehabilitation project to help children and disabled people in Gaza to hold on to life. Kınık stated that the project will focus on physiotherapy, psychological rehabilitation and vocational courses in three regions of Gaza. "A part of the project will focus on rehabilitation at home while the other part will take place at rehabilitation centers. We aim to reach people who were injured in the latest attacks and in need of rehabilitation along with potential disabled people," Kınık said. Apart from that, Kınık noted their project includes the social rehabilitation of children between ages of two and 12 who are psychologically traumatized. He stated that their team works intensely on the project. "The project will include roughly 50 professionals who will work in the field. Whether this number will increase or not depends on how long the war will continue. Our goal is to build five mobile clinics and rehabilitate people who are not able to come to our centers at their houses. We will continue to be there for Gaza and Palestine. That region is our priority," said Kınık.

He further stated that as a result of Gaza attacks which were launched on July 7 by Israel, Gaza is a disaster area. Kınık pointed out that the situation in Gaza can be compared to Marmara earthquake which took place on August 17, 1999. Kınık said, "Some neighborhoods have been wiped out from the map. Mainly health care facilities' infrastructures were bombed. People are unable to satisfy their basic needs such as food and drinking water. The hospitals ran out of medical equipments. Generally speaking, the healthcare system is exhausted and unable to meet the current demands."

He stated that over 2,000 people lost their lives and over 10,000 people were injured during Gaza attacks. He informed that 20 percent of the injured are badly hurt and 10 percent of them will be disabled for life. Kınık further stated that Doctors Worldwide is working in collaboration with Turkey's Ministry of Health to transfer urgent casualties to Turkey. "Presently, we transferred roughly 58 patients. Turkey was expecting more patients, however the number was restricted due to security measures," Kınık said. There is an urgent need for medical materials and drugs. Doctors Worldwide started to transfer drugs over through Egypt and Israel immediately after the war broke out on the Gaza Strip. Kınık said that the existing medical materials are not sufficient due to the high number of casualties in Gaza. "We need more advanced medical staff and doctors to give high quality medical care," Kınık continued. More medical equipment is also necessary. "For example, there is a casualty with broken limbs. To diagnose it, we need basic medical equipment. Even if there were doctors, they were unable to treat the patient. It is necessary to continue drug and medical equipment shipment," Kınık added.

The Turkish Red Crescent and TİKA (Turkish Cooperation and Coordination Agency) are the two important institutions which are sending significant aid to the war-torn region. This week, the Turkish Red Crescent will send an air cargo with drugs and medical material. The necessary diplomatic preparations continue to finalize custom clearance. Kınık further stated it is necessary to reconstruct or strengthen damaged medical facilities for vulnerable casualties whose treatment or operations have to take place at these buildings. Kınık announced that Doctors Worldwide is working to open a branch in Palestine. "Interested people can send aid via the official website yeryuzudoktorları.org. Alternatively, you can type 'Gazze' and send a SMS to 6612 for TL 5 of drug aid," Kınık said.
Last Update: Aug 25, 2014 9:41 am
RELATED TOPICS