'Sitting is deadly even if you exercise, get up from sitting position every hour' 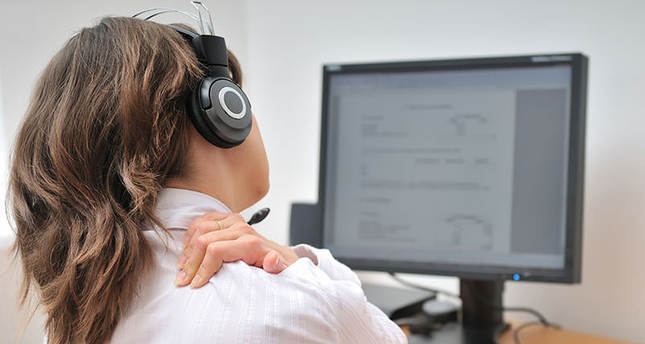 by Anadolu Agency Jan 22, 2015 12:00 am
Sitting can kill you, even if you exercise, according to a new study pooled by Toronto researchers from 41 international studies.

Results of the study appeared this week in the Annals of Internal Medicine.

The study concluded that the amount of time someone sits increases the risk of a plethora of diseases such as cancer, heart disease and diabetes, as well as death.

"More than one half of an average person's day is spent being sedentary-sitting, watching television or working at a computer," said Alter who led the analysis team.

The study found that sitting increased the odds of death from any cause by 15 to 20 percent and from contracting and deaths from cancer and heart disease by the same percentages.

It increased the risk of diabetes by up to 90 percent, Alter said.

"Avoiding sedentary time and getting regular exercise are both important for improving your health and survival," he said. But Alter also warned that 30 to 60 minutes of even vigorous exercise daily does not protect you if you "sit on your rear" for the rest of the day, local media reported.

The researchers did not say how much sitting is too much and indicated more research is needed.

But University of Manitoba associate professor of physical therapy Dean Kriellaars told the Canadian Broadcasting Corporation that the study's findings should lead to a change in workplace behavior.

"It's critical that this requires cultural change-that just means in policy, in legislative incentives, in terms of giving breaks (to) workers and employees," he said.

Kriellaars suggested getting up from the sitting position every 60 minutes.

"Every hour, just get up and move a little bit," he said. "You can stand up and do certain tasks, go for a walking meeting. You can have your lunch and then instead of doing 30 minutes of chatting, chat while you walk."