Smokers to kick the habit with free treatment 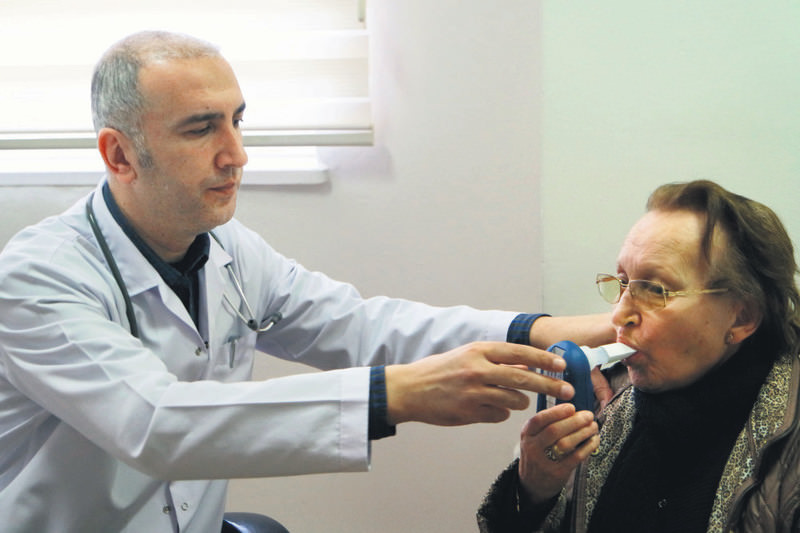 A doctor examining carbon monoxide levels of a smoker to determine her smoking rate. Patients are administered free medicine to quit smoking based on their smoking frequency and if no other treatment options are suitable.
by Daily Sabah with AA Mar 23, 2015 12:00 am

Looking to cut down on high smoking rates, Turkey re-introduced its free medication program for smokers to kick the habit four years after the supplies ran out due to high demand

The government has once again launched a free, anti-smoking medication program as part of its efforts to curb smoking rates in the country. Introduced last month, the program will see medicine being delivered to 300,000 patients all across the country free of charge.

Lauded by smokers seeking a way to break the habit, the free medicine saves staunch smokers from spending some TL 600 ($233.10) to give up smoking.

Free medication was first introduced in 2011, and 300,000 boxes of medicine were delivered to hospitals in all 81 provinces, but supplies quickly ran out due to high demand.

Yusuf Ocak, chief physician at a hospital in Bursa that specializes in pulmonary diseases, spoke on how the program works. Ocak said their supplies had fallen short soon after the free medicine was introduced in 2011. "There was high demand, and we've seen people loaning the medicine they were given to others in need. So, the government decided to supply another batch. This time, the medicine is not supplied directly to hospitals. Instead, they are stored in every neighborhood's family clinics for easier access. Medical staff examine the requests, and supply medicine to patients if they assess he or she would be able to quit smoking through the medication, and advise other ways if they assess that medicine alone cannot help them," he said.

Smokers applying for the medicine must first take the Fagerstrom Test for Nicotine Dependence, which grades the level of dependence, and patients are assessed based on illnesses not related to smoking and their lifestyle. For instance, long-haul truck drivers and those working in dangerous jobs are thoroughly examined before the administration of medicines for likely side effects. If a patient cannot qualify for the anti-smoking medicine, they are advised to seek treatment in clinics that specialize in helping smokers quit the habit. The clinics, offering free treatment for smokers, help them kick the habit either through therapy or through other methods such as nicotine patches and gums.

Fatma Keriman Subaşı, 74, is among the avid smokers being treated at one such clinic. She quit the habit 15 days ago after 50 years. "I am very happy that I finally gave it up. It happened thanks to the ministry's support, and I am grateful," she said.

Turkey is one of the few countries combating smoking effectively by a widespread ban and efforts to curb smoking by helping the addicts. Smokers are provided with Bupropion HCI and Varenicline, two drugs used as smoking cessation aids and nicotine replacements.

Health Ministry officials had announced that the free drugs boosted applications by addicts to hospitals to assist them in quitting smoking. In 2009, only 35,000 people had applied for treatment to quit the habit, but rose to 650,000 in 2011.

Started in 2009, the government - then headed by former Prime Minister Recep Tayyip Erdoğan, a staunch teetotaler - launched a nationwide campaign against smoking.

The country had introduced comprehensive legislation against the unhealthy habit in 2009, banning smoking in all public places. It now plans to implement sweeping measures such as a ban for smoking outdoors, including in areas open to public use such as playgrounds, school courtyards and mosques.

According to a health report by the Organization for Economic Co-operation and Development (OECD), from 2000 to 2012, the country has achieved significant progress in reducing the number of smokers. The number of daily smokers among adults decreased to 24 percent in 2012 from 32 percent in 2003. However, the report adds that the smoking rate among Turkish adults is still higher than the OECD average of 21 percent.
RELATED TOPICS