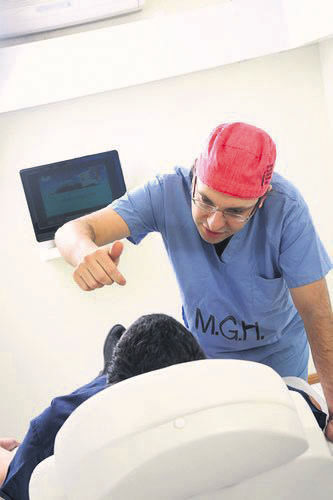 According to Association of Turkish Travel Agencies (Tu00dcRSAB) report, Turkey has earned $2,5 billion of income from health tourism in 2013.
by Daily Sabah with IHA May 13, 2015 12:00 am

Turkey has become one of the hottest spots for health tourism both for aesthetic treatments and medical operations, with the country hosting nearly 500,000 patients last year compared to only 75,000 in 2002

The number of patients who travel to Turkey for health tourism has reached nearly 500,000 in the last year, thanks to the country's high-quality health services, easy transportation and affordable prices. Moreover, health tourism is expected to increase dramatically once important projects such as Istanbul's third airport is completed. Turkey was mostly preferred by patients from Germany. Furthermore, oncology departments topped the list as the most visited medical departments.

The Director of Directorate General for Health Improvement, Hacı Ömer Tontuş, said there are many reasons behind Turkey's success in health tourism, as Turkey has been playing an active role in health tourism since 2002. He said there was a serious increase in the number of patients who came to Turkey by air over the past seven years. "While there were 75,000 registered international patients in 2008, 496,000 international patients were treated in Turkey in 2014. We can say that half a million patients prefer Turkey for medical treatments," Tontuş stressed.

Highlighting that mostly German and Russian patients come to Turkey for treatments, Tontuş said patients from the Middle East also prefer Turkey due to regional security issues. "Although patients from Germany and Russia take the lead in health tourism, we also welcome patients from the Netherlands, Libya and the U.K. We have been treating a huge number of Iraqi patients for the last four years as well due to the current state of the Middle East," Tontuş underlined, adding that certain hospitals are chosen by patients from northern Iraq.

Many patients from the Middle East are also regularly referred to Turkish doctors for plastic surgery and hair transplants. Patients from the U.K., the Netherlands and Germany mostly come to Turkey for treatments related to eye illnesses and other operations requiring advanced surgical techniques. "For instance, the operation for hip prosthesis costs more than $50,000 in the U.S. while it costs nearly $15,000 in Turkey," Tontuş said.

According to Tontuş, the price policy regarding health tourism in Turkey is determined after being compared to other countries, and continued giving examples by comparing prices in Turkey to those in the U.S.: "If we take the average price in the U.S. as a base, we provide health services at nearly 50 percent of the average cost of all 50 states. Hence, Turkey is an important center for specific operations that cannot be performed in any country."

Dr. Adem Akçakaya, the head physician of the Bezmialem Vakıf University (BVU) Medical Hospital, said the new airport will obviously affect the flow of international visitors interested in health tourism. Moreover, within the initiatives budgeted for the transformation of the health sector, an international clinic was established at BVU. The clinic hosted patients from Afghanistan from 2011-2012, and also Iraq and Libya in 2012. Akçaya said even for simple appointments like an MRI, international patients have to wait months. "The new airport will make transportation more accessible and be a big advantage. Compared to 2013, we increased the number of patients by 43 percent in 2014; the clinic's revenue also increased by about 50 or 60 percent. The clinic is showing a rising trend," he added.

According to statistics, Turkey is mostly preferred for cancer treatment. Akçakaya said they receive many cancer patients, and BVU has even opened an organ transplant center. "We also have many international patients with heart and urological problems. Some patients come for plastic surgery. We give priority to patients with oncological diseases," he said.

Ftayem Abudalgouse, a 78-year-old Libyan patient, said she came to Turkey to be treated for the second time. "This is my second visit to Turkey. I came here to buy medicine and am going to have an eye operation, as I have an infection in my eyes, and also have pain in my leg. They did not treat my illness in Libya," she said.

Kemis Ogwal, a 26-year-old Ugandan patient, said physicians in Uganda said his illness is incurable, but he is currently receiving chemotherapy in Turkey.
Last Update: May 13, 2015 11:17 pm
RELATED TOPICS