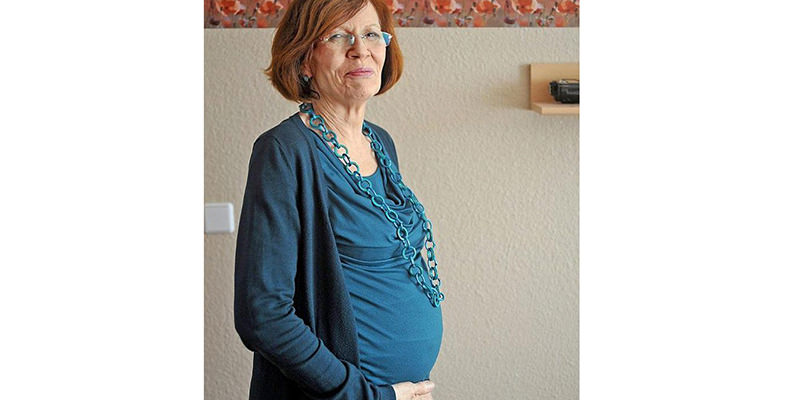 Primary school teacher Annegret Raunigk from Berlin, becoming the oldest mother of four in a single birth in the world (RTL Photo)
by May 27, 2015 12:00 am
Doctors at a Berlin clinic Wednesday said quadruplets, whose very premature births to a 65-year-old German mother have captured headlines and stirred debate, face big health risks.

Eight days after their delivery, two of the newborns are receiving help with breathing and one has undergone surgery for an intestinal problem, said the medical experts at the prestigious Charite hospital.

Teacher Annegret Raunigk, who already had 13 children, gave birth to the quadruplets by caesarian section in the 26th week of pregnancy, after travelling to Ukraine for fertility treatment.

Speaking at a press conference, Christoph Buehrer, head of neonatal services at the Charite university hospital, said the babies were born before fully maturing in the womb, making them "absolute high risk" cases.

"These are children who can die, who can contract serious illnesses or have after-effects," he said, adding that the risks were not tied to the fact they were quadruplets.

The clinic's head of obstetrics, Wolfgang Heinrich, told the press conference that, to his knowledge, Raunigk was the oldest woman in the world to have given birth to quadruplets.

News of Raunigk's multiple pregnancy emerged in April when she dismissed critics who said she was acting irresponsibly due to her age.

At the time she said that she decided to try to have another child because her youngest daughter, who was nine, wanted a little brother or sister.

The Berlin teacher of Russian and English, who is close to retirement, has negotiated exclusive rights to her story with the private TV channel RTL.

The quadruplets, three boys and a girl, weighed between 655 and 960 grams (1.4 to 2.1 pounds) at birth.
"These are very fragile babies, but totally sweet," Buehrer told reporters.

Both doctors stressed their only concern was the health of the newborns and their mother, and they did not weigh into the ethical issues surrounding such a late pregnancy.

Raunigk, who also has seven grandchildren, has left the intensive care unit, is doing well and is able to express breastmilk to feed the babies, the doctors said.