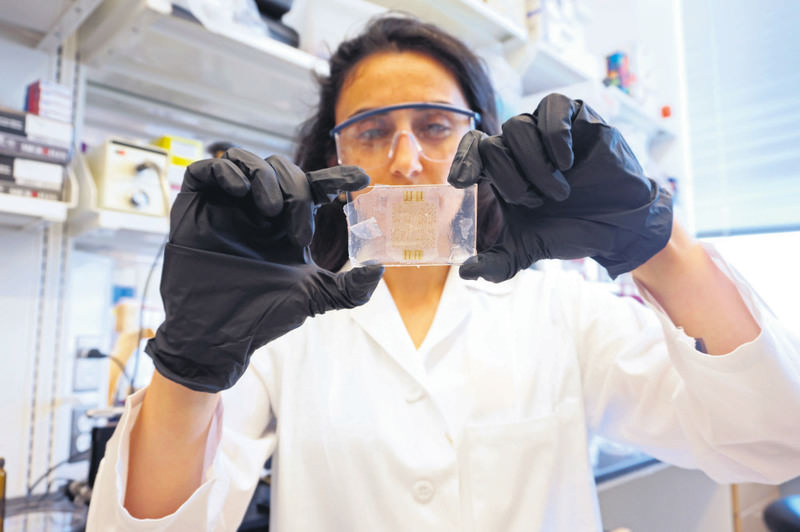 by Anadolu Agency Jun 03, 2015 12:00 am
Canan Dağdeviren, the first Turk to be elected as a Junior Fellow to the Harvard University Society of Fellows and made it on Forbes's "30 Under 30 in Science" list, invented a device that can easily and quickly diagnose skin cancer. The device is pasted to the skin like a tattoo and provides results in less than 10 seconds. Dağdeviren's research was published in "Nature Materials" magazine.Dağdeviren talked about her invention to Anadolu Agency (AA) at the Massachusetts Institute of Technology (MIT) where she is continuing her research. Explaining that the device exerts pressure on the skin in order to determine the structure of the skin, she said the device shows whether the skin has a tendency to develop cancer cells or not. "The structure of skin cancer has been already discovered by scientists. When the results show any resemblance to skin cancer, the patient undergoes other tests such as a biopsy," she said. She added that the device was tested on a patient who was suspected of having cancer and the doctors conducted a biopsy thereafter. "I sent my own data and highlighted the places that looked concerning. When the biopsy results came back two weeks later, they overlapped with my results. This is a fast, painless and easy method," Dağdeviren said.

Explaining that the device is stuck to the body and can be re-applied once it is removed, she said, "The patients do not even feel the device on their body as it is very thin. We gather the information digitally on a computer and a colorful map appears that displays the mechanical features of the skin. The device shows any abnormality even if it is a small one." The device, which looks like a tattoo, is produced under a microscope, and the elastic device can be applied anywhere on the body without causing pain. Dağdeviren said the device can be turned into a smartphone app and patients will be able to send their test results to their doctor, adding that this kind of app will ease patient density at hospitals.

Stressing that her invention can be used for different purposes besides detecting skin cancer, Dağdeviren said, "If it is used in a different mode, it can build the profile of your blood pressure and reveals how firm your vessels are. It can even determine how old you are." She said the device can indicate if the patient has high blood pressure and is at risk for a stroke. "It is like an early warning system; it cannot create a cure but alerts the patient beforehand," she said, adding, they plan to produce a wireless device in the future.

"The wireless device can be easily used at home. We have already got the patent for it. My dream is to build a company with many offices all over the world, including Turkey in order to serve my county," Dağdeviren said. She added that sending the U.S.-made devices to Turkey is expensive. "I am a citizen of Turkey; I was educated there. If my dream comes true, people will be employed and the Middle Eastern market will receive their devices through Turkey," she concluded.
Last Update: Jun 03, 2015 11:19 pm
RELATED TOPICS