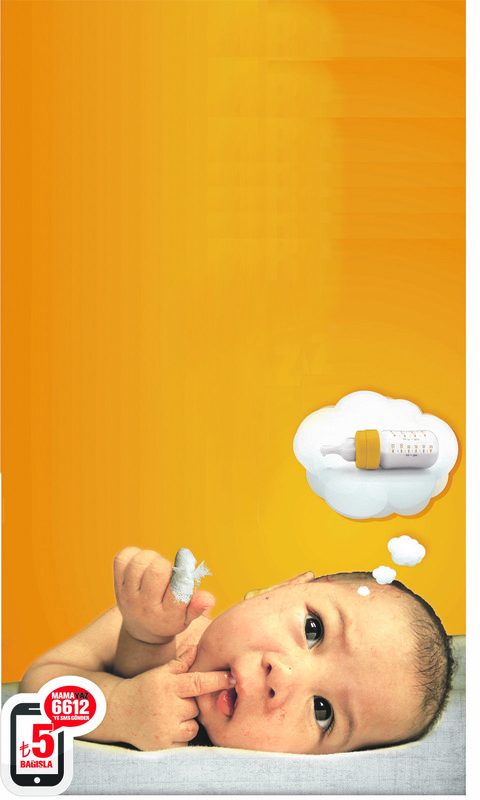 Lending a helping hand for people in need of health services, the Organization Doctors Worldwide has initiated a one-week campaign in Istanbul titled ‘Babies Cannot Endure Hunger,' in an attempt to draw attention to the malnourishment of babies and nurturing mothers in poor countries

Currently, 870 million people, mostly women and children, have to live without enough food to sustain their lives. In order to fight malnourishment, which was declared the biggest health problem in the world by the United Nations, Doctors Worldwide Turkey initiated an important campaign during Ramadan. Driven by the motto: "Babies Cannot Endure Hunger," the organization offers a helping hand to thousands of mothers and infants in poor countries such as Congo, Kenya, Chad, Ghana, Somalia and Niger during Ramadan. 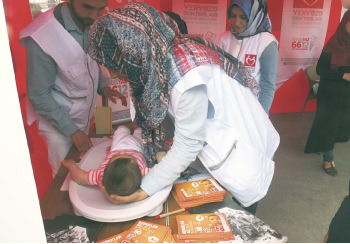 137 million babies are born every year, but 6.3 million of them die before the age of five. Most that die are born in 24 African countries that suffer from a lack of food. Every year, 3 million babies die directly due to malnutrition.

The Babies Cannot Endure Hunger campaign with which Doctors Worldwide aims to share the abundance of Ramadan with hungry mothers and infants around the world, was introduced to the public at the Doctors Worldwide tent in Eminönü Square. The project was introduced at a conference overseen by Doctors Worldwide Assistant General Secretary İlker İnanç Balkan and board member Sümeyye Tümtürk. Throughout the week, people will be able to acquire more information about the campaign, have their children weighed in order to know if their height and weight are in accordance with their age and advised about healthy diets. Speaking at the meeting, Balkan said malnutrition is one of the biggest problems in the world. According to the data announced by Balkan, 137 million babies are born every year, but 6.3 million of them die before the age of five. Most of them that die are born in 24 African countries that suffer from a lack of food. Every year, 3 million babies die directly due to malnutrition. Moreover, infants also die from pneumonia, diarrhea, malaria, tuberculosis and measles in countries where lack of food is the biggest problem. Every minute three babies die in Africa due to malaria. Balkan said: "While 1.3 billion tons of food is wasted every year, it is sad that the $0.25 an infant needs in order to be fed cannot be provided by the world's people. This is a reality that breaks our hearts every day."

Speaking about the organization's projects, Balkan said: "Doctors Worldwide's medical centers in Africa have provided medical and nutritional support to more than 60,000 mothers and children in many African countries, especially in Somalia, Niger and Congo so far. Our organization, which conducted several medical aid projects in Gaza, Syria and Yemen previously, is preparing to reach out to our brothers in Yemen who are in need of medical help." He added that Somali children who are crying to their mothers because they are hungry and children in Yemen, Syria and Gaza who cannot sleep due to the sound of bombs hang on to life thanks to donations from Turkish people. Commenting on the campaign, Tümtürk said: "It has been three years since we initiated our project 'Babies Cannot Endure Hunger.' This year, we intend to lend a helping hand to mothers and children in Syria and Yemen as they are facing hunger due to the political unrest and humanitarian crisis in their countries." She said the monthly medical and nutritional needs of an infant cost TL 30 ($11.06). "We want to increase the number of donors by offering them three different aid packages," Tümtürk stressed. Following the event, parents had their children's weight and height measured and formed long lines to get advice from volunteer doctors.

Those who want to donate to Doctors Worldwide can donate money online via www.yyd.org.tr or write an SMS with the word "MAMA" to 6612 to make a TL 5 donation. The Doctors Worldwide tent will remain open in Eminönü square throughout the week, where volunteer doctors will continue to provide information about the campaign and mother-child health to Istanbulites.
Last Update: Jun 18, 2015 10:28 pm
RELATED TOPICS