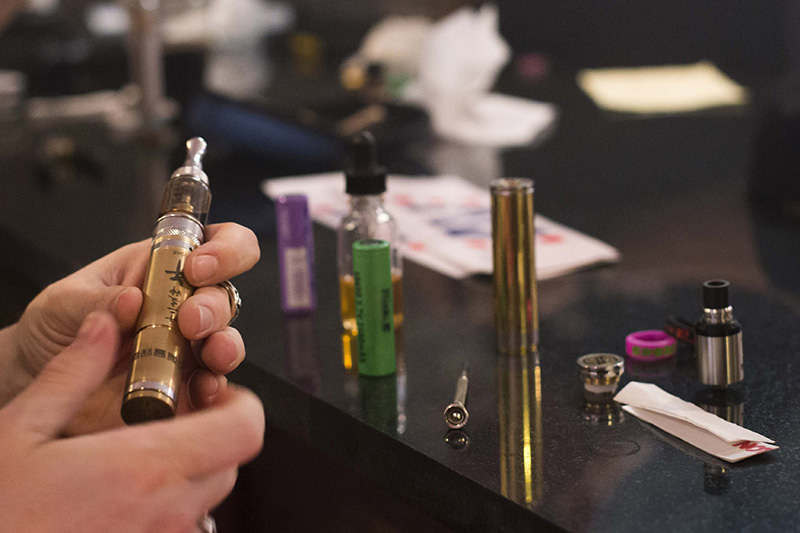 An array of mechanical mod equipment, or portable vaporizers, lies on a table ahead of a vapor cloud competition at the The Henley Vaporium in Lower Manhattan, New York on July 26, 2014 (Reuters Photo)
by Jun 23, 2015 12:00 am
Scientists who have devoted years developing medicines to cure disease are now working for tobacco companies to make e-cigarettes.

Altria Group Inc, makers of Marlboro, has recruited dozens of scientific and healthcare experts, as have independent e-cigarette companies such as NJOY. They bring experience developing inhalation devices and navigating the U.S. Food and Drug Administration, valuable knowledge in the new world of electronic cigarettes.

They say they're trying to improve public health.

"We were looking at drugs that make people very ill and maybe extend their life by 12 to 14 weeks," said Gizelle Baker, a PMI biostatistician based in Neuchatel who previously worked at the cancer drug developer Poniard Pharmaceuticals. "If you have a product that prevents cancer in the first place you can have a much bigger impact on public health."

The goal is to improve the current generation of e-cigarettes and, where possible, provide evidence that they reduce the risk of disease.

Companies that succeed could have an advantage in a market that Bonnie Herzog, an analyst at Wells Fargo Securities, sees surpassing combustible cigarettes in the U.S. within the next decade.

Products declared reduced risk by the FDA could be treated with a lighter regulatory hand.

"If tobacco companies can prove there is reduced risk, e-cigs are likely to remain less regulated and taxed than cigarettes," said Philip Gorham, an analyst at Morningstar who views PMI as leading the way in the industry. "If they can't, they will likely be subject to the same restrictions."

Tobacco executives say they have found willing recruits from the pharmaceutical industry, thanks in part to a wave of mergers and acquisitions that left many researchers looking for work. The 2008 financial crisis led to tens of thousands of job cuts and rattled even those who retained their positions.

Not all companies have the resources to conduct the kind of clinical trials being run at PMI, but many are looking for medical device experts who can help make higher-quality products.

The work is similar to that at MAP, where she tested ingredients for use in the company's inhaled drug devices. But she likes the entrepreneurial atmosphere at Pax and the idea of creating a smoke-free alternative to cigarettes.

"I grew up in China where there were far fewer smoke free areas," she said. "I am very sensitive to smells and for a long time if people were smoking next to me, I shut off half of my breath."

Dr. Joshua Rabinowitz, the interim chief executive of NJOY, said he too was drawn the public health potential of e-cigarettes. Rabinowitz co-founded Alexza Pharmaceuticals Inc , which makes an inhaler that allows drugs to be quickly absorbed into the bloodstream.

Altria hired James Dillard to head its regulatory affairs division. Dillard holds a degree in biomedical engineering from Tulane University and spent 13 years at the FDA, eventually becoming director of its cardiovascular and respiratory devices group. PMI hired Bruce Clark in a similar role, as vice president of regulatory and scientific affairs, a position he previously held at drugmaker Apotex Inc.

Some healthcare recruits are willing to develop reduced risk tobacco products but not for a company that also sells cigarettes.

"The whole set-up is schizophrenic," said Dr. Lars Erik Rutqvist, an oncologist and former professor at Sweden's Karolinska Institute who has been approached by big tobacco companies before. "I wouldn't want to be part of that because they still make most of their money from cigarettes."

Rutqvist works instead for Swedish Match AB, which sells smokeless tobacco products known as snus. The company was the first to file a modified risk application with the FDA for its snus products. A panel of advisors to FDA recommended in April that the agency reject the application.