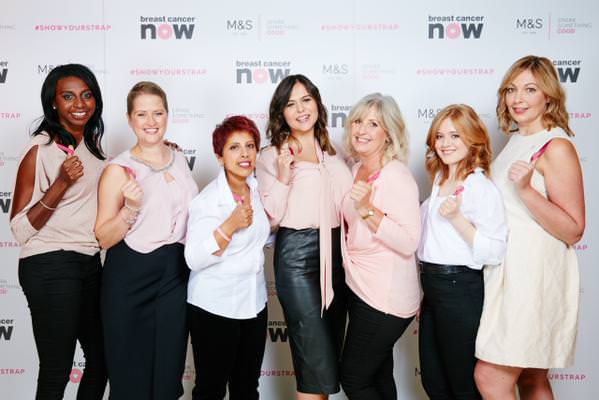 Twitter photo by @mandspress
by daily sabah
Oct 08, 2015 12:00 am
After recently launching a new lingerie campaign alongside another collection designed by Victoria's Secret model Rosie Huntington-Whiteley to raise awareness for breast cancer, retail-giant Marks & Spencer has received a lot of criticism on social media from breast cancer survivors for being 'insensitive'.

Breast cancer survivors have slammed the charity campaign for 'sexualizing' the disease. A group of breast cancer survivors from Younger Breast Cancer Network have initiated a counter-campaign to show 'the reality' of this cancer by posting their mastectomy scars with the caption #ShowYourScar.

The group wrote "We want people to understand that breast cancer isn't pink and fluffy, it doesn't always respond to treatment and it isn't something that only affects women after the menopause, it's a very real threat to younger women," on Facebook.

They have also called out the campaign for being 'downright insensitive' as survivors no longer wear bras after undergoing mastectomies.

The movement has gathered large support, especially on Twitter, all over the U.K.

M&S' new #ShowYourStrap movement asks women to 'show their bra straps' in the selfies they post on social media and donate £3 to cancer research. The aim of the campaign is to raise "£13 million over the next five years to fund vital research into breast cancer prevention".

Coinciding with Breast Cancer Awareness Month, the campaign has received a wide-range support from celebrities such as Maisie Williams from the hit HBO Show Game of Thrones, Cat Deeley from So You Think You Can Dance and actress Millie Mackintosh with their selfies on Instagram. Whiteley has also designed a 19-piece range for M&S which will donate 10% of the sales to charity. The collection includes a post-surgery bra.