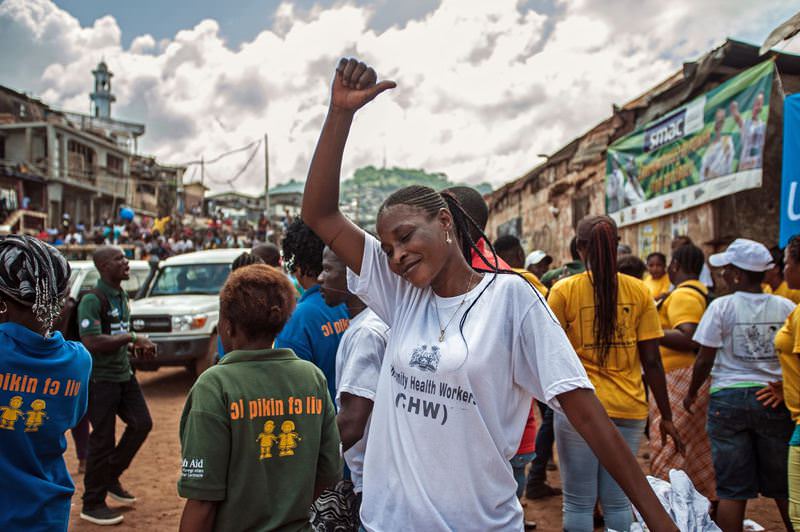 A woman celebrates with others as the country is declared Ebola free in the city of Freetown, Sierra Leone, Saturday, Nov. 7, 2015. (AP Photo)
by German Press Agency - DPA
Nov 07, 2015 12:00 am
The World Health Organization on Saturday declared Sierra Leone free from Ebola, after no new case of the deadly virus was detected in the past 42 days.

People in the West African country took to the streets to celebrate the end of a one-and-a-half-year fight against the virus and lit candles in memory of the victims.

"Sierra Leone achieved this milestone through tremendous hard work and commitment while battling the most unprecedented Ebola virus disease outbreak in human history," a WHO statement said.

No new infections within a 42-day period amounts to two incubation cycles of the Ebola virus.

Ebola has infected more than 8,700 people in Sierra Leone since the first case was recorded in May 2014, the country's WHO representative Dr Anders Nordstrom said.

Around 3,600 people died from the virus in total, 221 of them healthcare workers.

"The disease challenged the very foundations of our humanity," President Ernest Bai Koroma said in response to the news.

"We had to change the way we grew up caring for sick relatives, the way we mourned loved ones, the way we showed affection when greeting each other," he added.

Koroma also criticized the advice received from experts when the health epidemic first broke out, arguing that "too many wrong turns" were made that ultimately cost lives.

Neighbouring Liberia was also declared free of the virus in September. Since then, there have only been a few isolated cases of new infections in Guinea.

Sierra Leone will now be on high alert during the next 90-day phase as it monitors and isolates possible new cases.

WHO commended the government's strong leadership in mobilizing the necessary resources to fight the highly infectious virus.

"We now have a unique opportunity to support Sierra Leone to build a strong and resilient public health system ready to detect and respond to the next outbreak of disease, or any other public health threat," Nordstrom said.

Ebola, a virus transmitted through contact with blood and other bodily fluids, causes massive haemorrhaging and has a fatality rate of up to 90 per cent if left untreated.

According to UN data, Sierra Leone is one of the world's poorest countries. A decade-long civil war that ended in 2002 severely devastated the economy and destroyed infrastructure.

"The Ebola outbreak has decimated families, the health system, the economy and social structures," Nordstrom said, adding that now was the time to recover.

But scientists have cautioned that the Ebola crisis may not be over, with a recent study showing that male survivors can carry elements of the virus in their sperm for nine months.

Tom Frieden, head of the US Centres for Disease Control and Prevention, which was involved in the study, said many Ebola survivors face ongoing health problems.

WHO estimates that 11,300 people have died after contracting the Ebola virus across Liberia, Sierra Leone and Guinea.
Last Update: Nov 07, 2015 8:26 pm