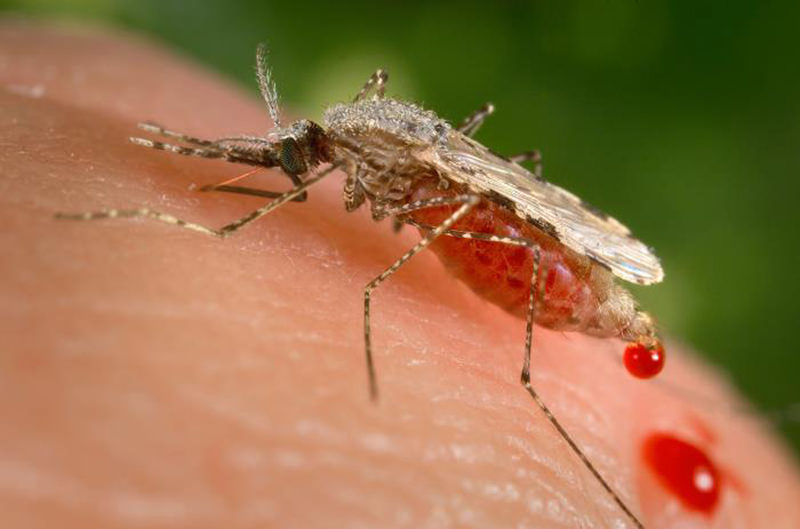 Photo shows a feeding female Anopheles stephensi mosquito crouching forward and downward on her forelegs on a human skin surface. (AP Photo)
by Nov 24, 2015 12:00 am
Scientists have produced a strain of mosquitoes carrying genes that block the transmission of the malaria parasite, with the hope they could breed with wild populations and produce offspring that cannot spread the disease.

The American researchers used gene-editing, a genetic engineering technique in which DNA can be inserted, replaced or deleted from a genome, on the species Anopheles stephensi that spreads malaria in urban India.

They inserted DNA into the germ line, cells that pass on genes from generation to generation, of the species, creating mosquitoes with genes that prevent malaria transmission by producing malaria-blocking antibodies that are passed on to 99.5 percent of offspring.

Malaria is caused by parasites transmitted people through the bites of infected female mosquitoes.

The goal is to release genetically modified mosquitoes to mate with wild mosquitoes so that their malaria-blocking genes enter the gene pool and eventually overrun the population, short-circuiting the species' ability to infect people with the parasites.

"It can spread through a population with great efficiency, increasing from 1 per cent to more than 99 per cent in 10 generations, or about one season for mosquitoes," University of California-San Diego biologist Valentino Gantz said.

University of California-San Diego biologist Dr Ethan Bier called this a "potent tool in sustainable control of malaria," as all the mosquitoes in a given region would carry anti-malarial genes.

"We do not propose that this strategy alone will eradicate malaria," University of California-Irvine molecular biologist Professor Anthony James said.

But he said in conjunction with treatment and preventive drugs, future vaccines, mosquito-blocking bed nets and eradication of mosquito-breeding sites, it could play a major role in sustaining the elimination of malaria.

Other scientists have been working to create genetically engineered mosquitoes, with one group saying last year that it created a strain carrying a gene leading nearly all offspring to be male, which could cause wild populations to plummet.

"In contrast, our much more flexible system only prevents mosquitoes from carrying malaria but can be used to do no harm to the mosquito. So it should generate the least amount of ecological damage," Dr Bier said.

The United Nations World Health Organisation estimates there will be 214 million cases of malaria worldwide in 2015 and 438,000 deaths, most in sub-Saharan Africa.

The research was published in the Proceedings of the National Academy of Sciences.