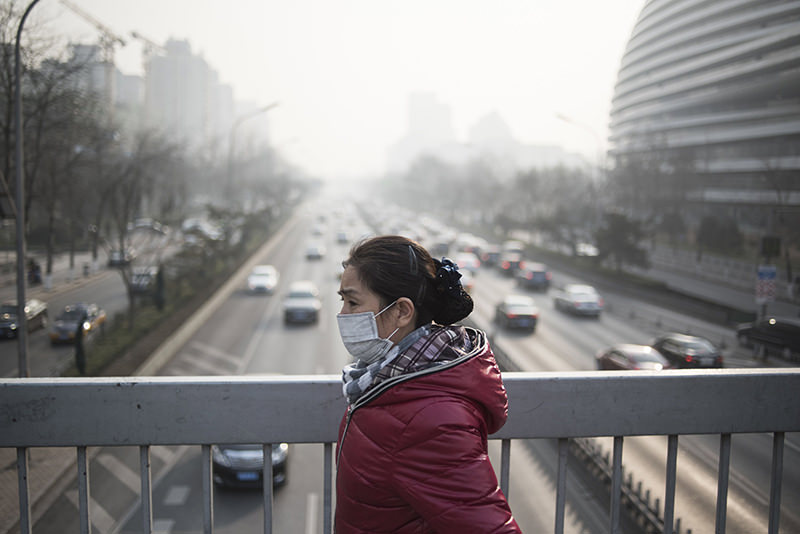 A woman wears a mask as she walks in a street on the 3rd day of a ,red alert, for pollution in Beijing on Dec 21, 2015. (REUTERS Photo)
by reuters Jan 16, 2016 12:00 am
Women who live close to major highways where the air is polluted by traffic exhaust fumes may be slightly more likely to have fertility problems than women who live further away where the air is cleaner, a U.S. study suggests.

Researchers followed more than 36,000 women from 1993 until 2003 and analyzed air pollution and traffic exhaust near their homes to see if what they breathed might be connected to their ability to conceive.

Over the study period, there were about 2,500 reported cases of infertility. Women who lived close to a major roadway – within 199 meters, or about a tenth of a mile - were 11 percent more likely to experience this problem than women who lived farther from a highway, the study found.

"The risks are slight," said study leader Dr. Shruthi Mahalingaiah, a researcher at Boston University School of Medicine, in an email.

But even the slight increased risk can present a big global public health problem, said Mark Nieuwenhuijsen, a researcher at the Center for Research in Environmental Epidemiology and the Barcelona Institute for Global Health.

"For an individual woman the results may not be that important because the risk of infertility only increases slightly, but for society as a whole it is important because so many women are exposed to air pollution," Nieuwenhuijsen added by email.

To look at the link between infertility and air pollution, Mahalingaiah and colleagues examined data on what's known as particulate matter – a mixture of solid particles and liquid droplets that can include dust, dirt, soot and smoke – near women's homes and also assessed how close their residences were to major roads.

They focused on what's known as primary infertility, when women try to conceive for at least a year without success, as well as secondary infertility, which refers to couples who struggle with conception after having at least one prior pregnancy.

When women lived close to major roads, they were 5 percent more likely to report primary infertility, an increase in risk that wasn't statistically significant, meaning it might have been due to chance.

But these women were 21 percent more likely to report secondary infertility than women who lived farther away, and that increase was statistically significant, researchers report in the journal Human Reproduction.

This association was found even at relatively low concentrations of particulate matter, or less polluted air, although the connection became stronger as the pollution levels increased.

One limitation of the study, however, is that researchers didn't know the exact dates when conception efforts started or infertility was diagnosed, making it difficult to closely examine how the timing of pollution exposure might influence the odds of pregnancy.

While the study is one of the first of its kind to follow so many women over such a long period of time, more research is needed before making medical recommendations based on the results, Mahalingaiah said.

Even so, the findings add to a growing body of evidence suggesting that pollution can negatively impact conception efforts, said Dr. Sajal Gupta, a researcher at Cleveland Clinic in Ohio who wasn't involved in the study.

"Couples suffering from infertility need to exercise caution especially if they are residing in areas with high ambient particulate matter," Gupta said by email. "Relocating to areas with low contamination of particulate matter is an alternative to prevent adverse impact on fertility."

Infertility is just one of many health problems tied to air pollution, noted Christopher Somers, a biology researcher at the University of Regina in Canada who wasn't involved in the study.

"Air pollution is worse near major roads with high traffic volumes, so avoid living in these areas if you can," Somers said by email. "If this is not an option, pay attention to air quality advisories and adjust outdoor activities accordingly."
Last Update: Jan 16, 2016 7:33 pm
RELATED TOPICS