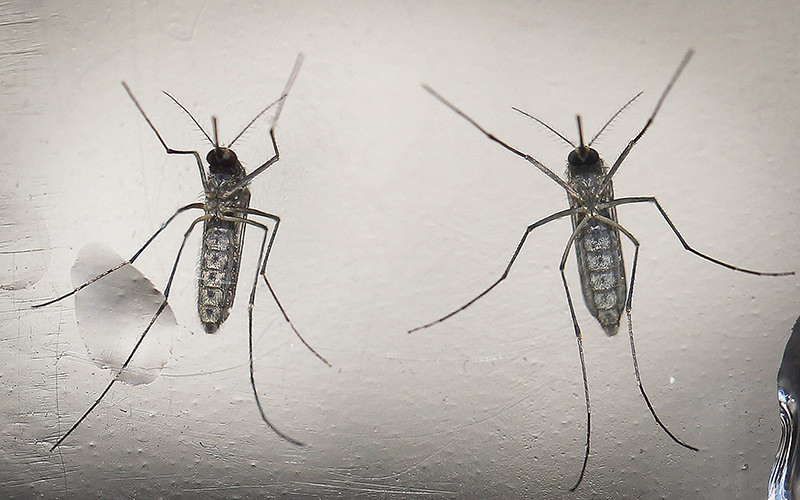 A photo made available 15 February 2016 dated shows a mosquito 'Aedes aegypti', that transmit the Zika virus. (EPA Photo)
by Daily Sabah with Agencies Feb 16, 2016 12:00 am
Russia has registered its first case of a person infected with the Zika virus after a tourist contracted the disease in the Dominican Republic, Russian Health Minister Veronika Skvortsova said on Monday.

"The first infection with Zika has been recorded. This is a 36-year old Russian woman who was in the Dominican Republic and came back to the Russian Federation in February," Skvortsova told reporters at a UN briefing on Russia's Ebola vaccine.

Skvortsova said the unnamed woman's family were healthy and had not tested positive for Zika, which has reached more than 30 countries and been linked to thousands of birth defects in Latin America. The World Health Organization declared the spread of the disease a global health emergency earlier this month.

Skvortsova said Russians travelling to countries with Zika were being tested before returning home.

"We are extremely cautious," she said. "Our specialists have come up with excellent methodological protocols for immediate diagnosis of Zika, and also preventive measures."

So far, 27 countries have confirmed cases of the virus, and dozens of Europeans and North Americans returning from Zika-affected areas have also tested positive for the virus.

Brazil has been hardest hit by the outbreak with more than 20,000 cases, including over 2,000 pregnant women.

Thailand and Indonesia have reported one case each, but health experts have warned some Asian nations are vulnerable to a Zika outbreak.

Health authorities have said Zika could infect up to four million people in Latin America and spread worldwide.

The Zika virus is transmitted by the Aedes aegypti mosquito, which is also known to carry the dengue, yellow fever and Chikungunya viruses. These mosquitoes bite repeatedly and therefore visitors are urged to use bug repellants and apply them regularly.

Health experts are unsure why the virus - detected in Africa in 1947 but unknown in the Americas until last year - is spreading so rapidly in Brazil and neighboring countries.