US astronaut nearly 5cm taller after spending a year in space 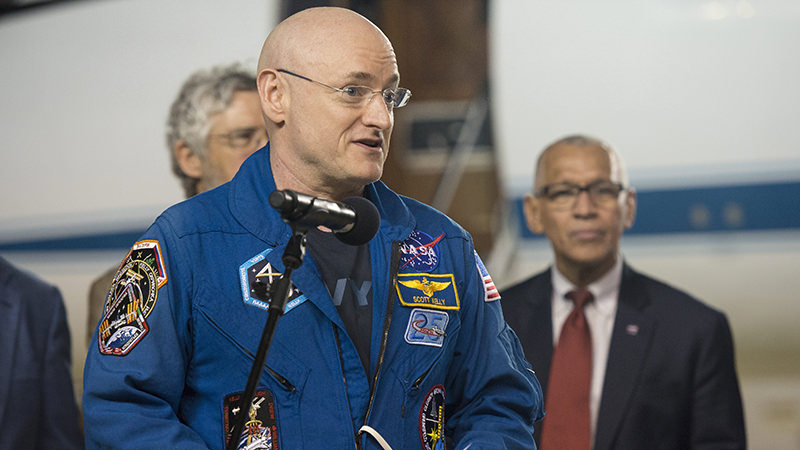 Researchers at the space agency pointed out that the growth is due to the lack of gravity in outer space, which causes the spinal disks to expand.

Kelly descended to Earth on Tuesday, landing in the Kazakhstan desert in a capsule with two Russian cosmonauts.

By the time the twins were reunited on Wednesday, the 1.5 inch (3.8 cm) increase in height Kelly experienced as a result of his spine expanding in microgravity had reversed.

Kelly is now an important asset to NASA for studying the long-term effects of space habitation on the human body.

His identical twin, Mark, and scientists will compare the two men thoroughly after Scott's lengthy sojourn in space.

"The whole time you were up there being monitored, Mark was down here being monitored, giving us an unprecedented benchmark of extraordinary relevance to understand the physiological changes to which people are exposed in space," said Dr. John Holden, policy director of the White House Office of Science and Technology. "It's going to help us figure out how to deal with those physiological changes on the even longer missions that are ahead when we go to Mars. And we are going to Mars, there is no doubt about that."

Researchers will be very interested in how Kelly's organs and muscles reacted to his 340-day stay in space-the longest of any American astronaut.

Doctors will be watching if he loses any vision -- astronauts often suffer from mild vision loss after returning to Earth, although scientists do not know why.

Researchers will also be monitoring how Kelly was affect by increased levels of radiation aboard the ISS, which is about 20 times higher than levels on Earth.

Kelly, however, was happy to be home.

"Great to be back on Earth," he tweeted Thursday alongside a video of him falling into a swimming pool. "There's no place like home!"
Last Update: Mar 06, 2016 7:08 pm
RELATED TOPICS