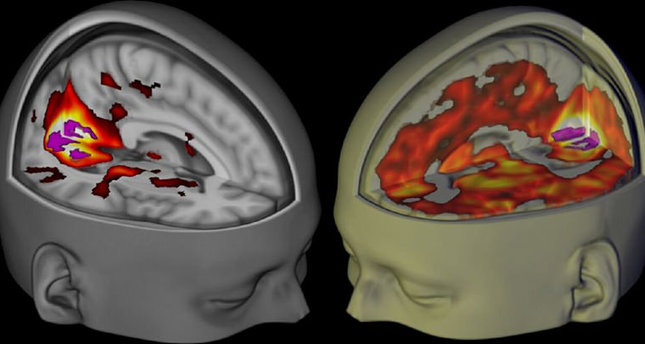 The brains of subjects lying awake with their eyes closed, under a placebo (L) and the drug LSD (R). (REUTERS Photo)

Scientists have for the first time scanned the brains of people using LSD and found the psychedelic drug frees the brain to become less compartmentalized and more like the mind of a baby.

A research team led by scientists at Imperial College London said that while normally the brain works on independent networks performing separate functions such as vision, movement and hearing, under LSD the separateness of these networks breaks down, leading to a more unified system.

"In many ways, the brain in the LSD state resembles the state our brains were in when we were infants: free and unconstrained," said Robin Cahart-Harris, who led the study. "This also makes sense when we consider the hyper-emotional and imaginative nature of an infant's mind."

The findings, published on Monday in Proceedings of the National Academy of Sciences (PNAS) journal, also showed that when the volunteers took LSD, many extra brain areas - not just the visual cortex - contributed to visual processing.

This could explain the complex visual hallucinations that are often associated with the LSD state, the scientists said.

Carhart-Harris, a researcher at Imperial's department of medicine said the experience also seemed to be linked to "improvements in well-being" after the drug's effects subside, suggesting the findings may one day lead to psychedelic compounds being used to treat psychiatric disorders.

Such drugs could be particularly useful in mental disorders where negative thought patterns have become entrenched, the scientists explained, such as in depression or addiction.

"For the first time, we can really see what's happening in the brain during the psychedelic state, and can better understand why LSD (Lysergic acid diethylamide) had such a profound impact on self-awareness," said David Nutt, a professor of neuropsychopharmacology who worked with Carhart-Harris.

"This could have great implications for psychiatry."

The Imperial team worked alongside the Beckley Foundation, a British-based group that backs scientific research into the potential medical benefits of psychoactive substances.

This study, funded by Beckley and by public donations through a crowdfunding platform, involved 20 healthy volunteers, each of whom received both LSD and a placebo, and all of whom were deemed psychologically and physically healthy. All the volunteers had previously taken some type of psychedelic drug.

During controlled and supervised experiments in a specialist research center, each volunteer was given an injection of either 75 micrograms of LSD, or a placebo. Their brains were then scanned using various techniques, including functional magnetic resonance imaging (fMRI) and magnetoencephalography (MEG).

Using these techniques allowed the scientists to study activity in the whole brain by monitoring blood flow and electrical activity.

Share on Facebook Share on Twitter
Previous in Health People who smoke may find it harder to get work, and make less money... Next in Health According to a recent World Health Organization (WHO) report, 4.5...
DAILY SABAH RECOMMENDS