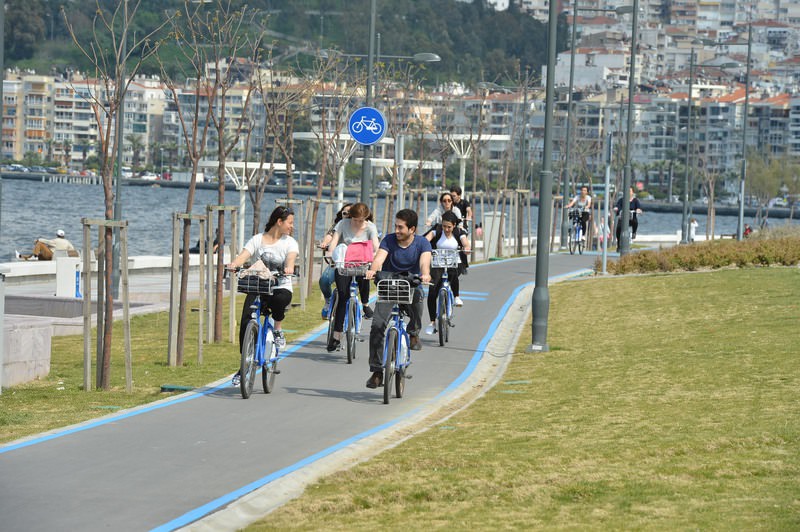 by Anadolu Agency Apr 25, 2016 12:00 am
Throughout 2016, the Health Ministry will distribute more than 300,000 bicycles to children as municipalities try to encourage cycling and physical activity around Turkey. Municipalities are also giving support to establish more public cycling roads. Bicycle distribution already started last weekend and, in collaboration with national education departments, public health directorates have distributed bicycles to children and students staying at boarding schools.

To mark April 23 National Sovereignty and Children's Day, 65,000 bicycles were presented to children from around the country. The distribution will continue at scheduled periods throughout the year to reach 2016 goals. The initiative is part of the Healthy Nutrition and Active Life Program that will run until 2018. The Health Ministry stressed that a 10 percent reduction in physical inactivity and halting the rising prevalence of obesity and diabetes are the two main requirements that the United Nations action plan is asking from its member countries by 2025. A series of scientific studies have shown that physical inactivity is the main cause behind almost 25 percent of breast and colon cancer, 27 percent of diabetes and 30 percent of ischemic heart diseases.

The statement also includes results from a dietary and health study that was conducted in Turkey in 2010. Based on the study results, about 72 percent of Turkish people do not exercise regularly while two thirds of them suffer from weight problems. The study also notes that physical inactivity is a problem among children in Turkey. The ministry said that aside from good physical activity, cycling is important to protect the environment and create much healthier living spaces.
RELATED TOPICS