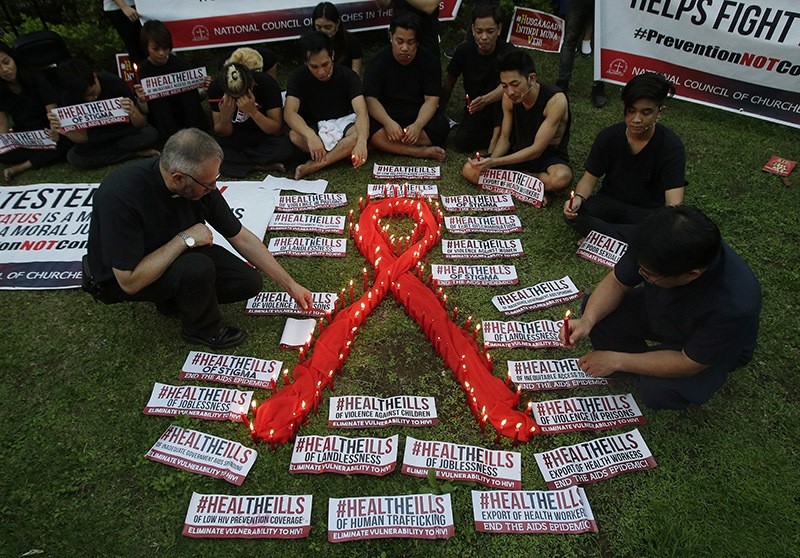 A priest lights candles around an AIDS symbol as he participates in an event in observance of World AIDS Day in Quezon city, Philippines on Dec. 1, 2016. (AP Photo)
by Associated Press Dec 09, 2016 12:00 am

A human rights group says the Philippines is facing one of the fastest growing epidemics of HIV in the Asia Pacific, fueled by government policies that restrict intervention, including access to condoms by homosexual men.

Human Rights Watch said in a report released Thursday that HIV prevalence among homosexual men has increased tenfold in the last five years, but the government has failed to adequately target prevention measures on that population.

It said HIV prevention education in Philippine schools is woefully inadequate, commercial marketing of condoms is nonexistent, and barriers to condom access and HIV testing — particularly those below 18 who are required by law to have parental consent— have contributed to the worsening epidemic.

The report said the problems found in national and local government policies are compounded by longstanding resistance of the Roman Catholic church to contraceptives. More than 80 percent of Filipinos are Catholic.

Peter Mosende, a country officer of the Joint United Nations Program on HIV/AIDS or UNAIDS, said the Philippines has the highest rate of new HIV infections in the Asia-Pacific region, with new cases increasing by more than 100 percent from 2001 to 2015.

Beginning in 2010, the transmission trend shifted from heterosexual relations to homosexual relations, which this year accounts for 87 percent of new infections, the health department said. More than half of those infected men are 25 to 34 years old, and nearly 30 percent are aged 15 to 24.

"The government had a pretty good track record of fighting HIV-AIDS, but basically they are fighting the last war," Phelim Kine, HRW deputy director for asia, said in an interview. "They are still focusing on female sex workers and their clients when actually the epidemic has changed, but the government's approach is not changing and it needs to or else this will really get out of control."

He said while President Rodrigo Duterte has earned criticism for his bloody war on drugs, government action on the HIV problem is "something we can reasonably hope for" given Duterte's expressed support for public health and rights of lesbian, gay, bisexual and transgender people.

Health Secretary Paulyn Ubial last week said her department plans to distribute condoms in schools after coordination with the education department and school authorities. She said her office is considering making HIV self-testing kits available to the public.

The report is based on field research between February and October, and interviews with 82 people across eight cities, including two where officials have prohibited the sale or distribution of condoms and other contraceptives.

The research found that young homosexual men have been subjected to ridicule when they buy condoms from drug stores and have faced stigma when they go to social hygiene clinics that provide free condoms to sex workers.

The report recommended abolishing legal restrictions that bar youth under 18 years of age from buying condoms or getting HIV tests without parental consent, better sex education in schools, and imposing penalties on municipalities that refuse to comply with the laws that guarantee the public distribution of contraceptives, including condoms.