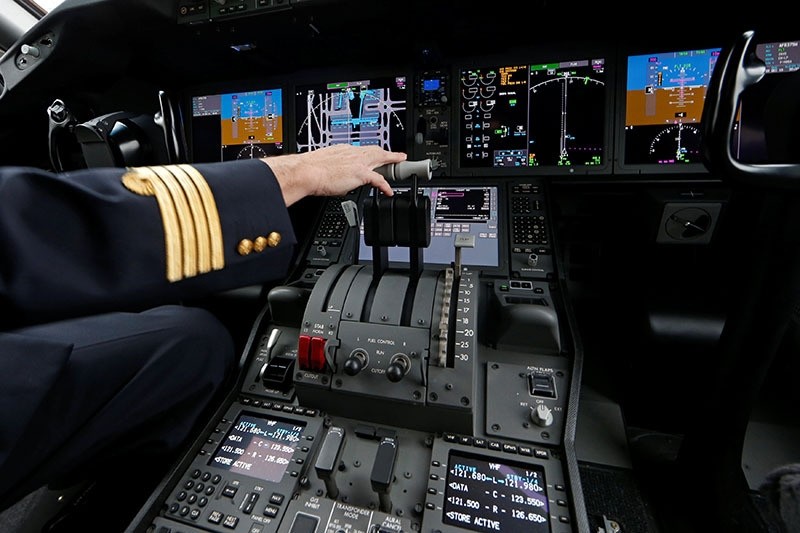 An Air France pilot stands in the cockpit of the airline's new Boeing Inc. 787-9 Dreamliner passenger aircraft as it stands on the tarmac at Charles de Gaulle Airport in Roissy, France, December 2, 2016. (Reuters Photo)
by Dec 15, 2016 12:00 am

Hundreds of commercial airline pilots worldwide may be flying with untreated depression because they fear being grounded or losing their jobs, a new survey suggests.

The survey offers one of the first snapshots of mental health among commercial pilots, who often don't disclose this type of illness to airline officials or aviation regulators because they fear negative career repercussions, said senior study author Joseph Allen, a public health researcher at Harvard University in Boston.

"It's understandable that pilots are reluctant to fully disclose mental health issues because of the potential that they will be grounded or declared not fit for duty," Allen told Reuters Health by email.

With roughly 140,000 active pilots flying more than 3 billion people worldwide each year, the survey results should put the airline industry on notice that many pilots need better access to mental health screening and treatment, Allen added.

The new findings come a year and a half after a Germanwings co-pilot who suffered from depression deliberately crashed a plane into the French Alps, killing 150 people.

Globally, roughly 350 million people suffer from depression. Effective treatments exist, but many people don't get them - often due to stigma.

To get a better picture of mental health among airline pilots, researchers conducted an anonymous online survey between April and December of 2015. Questions touched on a range of topics related to work and health in addition to depression.

Most respondents came from the U.S., Canada and Australia.

Out of nearly 3,500 pilots who participated in the survey, 1,848 completed the questions about mental health. Within this group, 233 (12.6 percent) met the criteria for likely depression and 75 (4.1 percent) reported having suicidal thoughts within the previous two weeks.

Among 1,430 participants who reported working as an airline pilot in the previous seven days at the time of the survey, 193 (13.5 percent) met the criteria for depression.

A greater proportion of male pilots than female pilots reported that "nearly every day" they had experiences of loss of interest, feeling like a failure, trouble concentrating, and thinking they would be "better off dead."

The study also found that depression was more likely when pilots took lots of sleep medication and when they experienced sexual or verbal harassment.

Limitations of the study include the lack of medical records or exams to assess mental health symptoms pilots reported in the survey, the authors note.

"The study likely underestimates the amount of depression that exists among pilots, however, it cannot address the severity of the symptoms and the extent of individual impairment," Dr. Joseph Baskin, a psychiatrist at Cleveland Clinic in Ohio who wasn't involved in the study, said by email.

Pilots may not tell their own doctors about feeling depressed because both having this diagnosis and taking antidepressants come with stigma and a fear of being grounded, said Dr. Blake Lollis, an aerospace medicine specialist at Yakima Valley Memorial Hospital in Washington who wasn't involved in the study.

Still, this diagnosis isn't as career-ending as it used to be, Lollis added by email. They may cleared to fly, for example, while on anti-depressants, even if they would be grounded for severe depression accompanied by any psychotic symptoms.

"It is clear that depression is undertreated among pilots," said Dr. Alpo Vuorio, an aviation medicine researcher at the University of Helsinki in Finland who wasn't involved in the study.

"I hope that current discussions after the Germanwings accident has helped pilots to seek help more openly," Vuorio said by email.