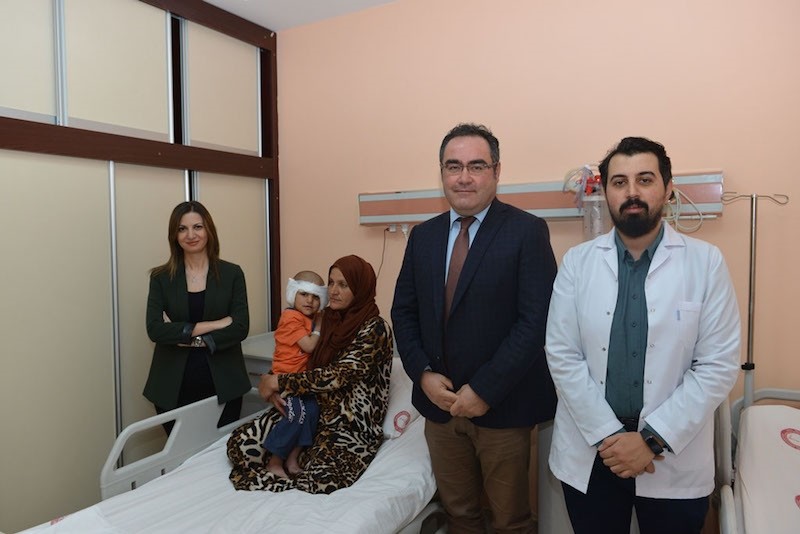 A Syrian hearing-impaired three-year-old named Mervan Zugahi has been fitted with a "bionic ear" at the Mustafa Kemal University (MKÜ) Health Practice and Research Hospital in Turkey's southern Hatay province.

Zugahi and his family took refuge in Turkey due to the ongoing civil war in their home country, and the child, who cannot speak because of his hearing impairment, was taken to be treated at the MKÜ Hospital.

Professor in the MKÜ Ear, Nose and Throat Department, Dr. Ertap Akoğlu, explained that he had performed a successful one and a half hour operation on Zugahi, who could not hear with either ear.

Akoğlu stated that Zugahi was fitted with a "cochlear implant," which is an electronic devise that provides a sense of sound to deaf patients and is also known as a "bionic ear."

The implant was attached to both of Zugahi's ears in a single operation, a first for the Hatay hospital, and Akoğlu explained that the child would adapt to the implant in the coming days and will soon be able to hear and talk.

Emphasizing the need for early diagnosis for successful surgeries in congenital hearing loss patients, Akoğlu said parents who suspect hearing loss in their children should take them to health institutions immediately for examinations and screening tests.

According to a study, deaf children who receive cochlear implants before turning 18 months old have similar language skills to their hearing peers.

Typically fitted behind the ear, cochlear implants include a microphone and electronics that transmit a signal to electrodes in the cochlea, the auditory portion of the inner ear, stimulating the cochlear nerve.