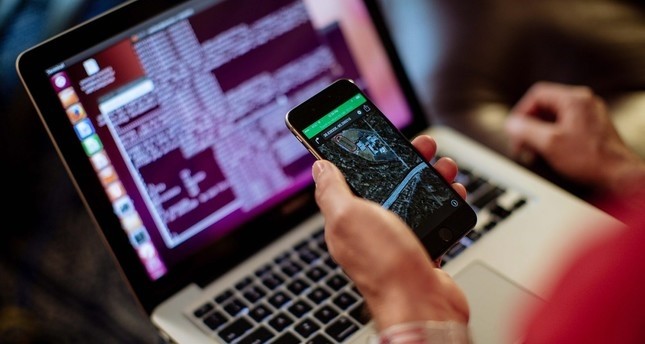 The internet and smart technology have become a significant part of our lives and, according to recent findings, 3.6 percent of people between the age of 12 and 18 are addicted to technology and 21.8 percent of teens are on the brink of addiction

A study conducted in the Turkish Green Crescent's academic journal Addicta: The Turkish Journal on Addictions, reveals that adolescents fall into a significant risk group for internet and technology addiction.

The research also revealed that these adolescents prefer playing online games rather than playing sports or engaging in outdoor activities.

Turkish Green Crescent Society Vice President and Clinical Psychologist Mehmet Dinç said that one of the biggest causes of technology addiction among children is the unhealthy relationship model parents have established with television.

Noting that there are millions of people who leave the TV on inside the home to have some kind of background noise, Dinç said, "When parents come to me with complaints about their children's technology addiction, I ask them, 'What should your child do when he/she is away from the computer?' The answer I get is usually, 'He/she should come and watch TV with us.' In short, parents present watching television as something much better. So, they pull the child from one screen and bring him/her in front of another."

Dinç stated that children who watch television and play computer games for a long period of time usually suffer from developmental delays, pointing out that children should be kept as far away from the TV as possible until 3 years old. Instead, Dinç recommends that parents communicate with children through active games, stressing that studies conducted in this field have indicated that 70 percent of brain development is completed in the first year of life and a child gains motor skills and the sense of sight, sound, touch and speech, socialization and playing skills between infancy and 3 years of age. He also added that in this period when the child's rapid development of language and intelligence begins, the possibility of developmental delays increases in children who watch TV for long periods of time.

Stating that the images on television, mobile phones, tablets and computer screens prevent children from understanding differences in size perception, Dinç said the most important step for a baby and a child in the stage of development in terms of brain development is the visual realization of depth, dimension and perspective differences, stressing that the screens work with principles that go against the developmental mechanism of the human brain. "Children cannot learn the difference between a two-dimensional drawing and a real three-dimensional object on a computer screen. Even children perceive what they see on the TV screen as a whole and not a separate figure. Instead of following and watching the figures, they look at the entire screen which has a hypnotic effect," he added.

He pointed to the fact that children who are not old enough to divide reality and fantasy are viewing violence displayed by cartoon characters, leading them to aggression in the future.

Expressing that children are exposed to passive violence in this way, Dinç said that the screens also make it difficult for early-stage children to pay attention to more inactive stimuli, which are the cornerstones of reading and writing, such as books or toys, while changing their attention thresholds. He added that many children today do not get in the habit of reading books because they watch TV starting at an early age.

Indicating that parents who do not care about the addiction problem caused by unconscious and uncontrolled technology usage could pose significant dangers to their children's health. Dinç also warned parents about the use of online games and social media accounts. "Computer games contain an unimaginable amount of violence. As a matter of fact, we have experienced very upsetting events because of violent and addictive games. There are also big dangers in social media which now face children who are active users," Dinç continued. "Parents do not know who their children are talking to or who their friends are. Children's computers, phones and social media accounts should also be checked and monitored."

Dinç underlined that parents need to question their own relationship with technology as well. "If we are to be role models as parents, we need to look at our own internet usage. The computers that are turned on as soon as getting home and the endless use of phones are already spoiling communication," Dinç said, noting that first, it is important to be able to establish communication within the family and to be able to enjoy each other during free time. "When you enjoy spending time together and where there is strong communication, technology will not be seen as a shelter," he added.

Suggesting that the formation of alternative lifestyles will prevent this addiction, as well, Dinç said, "We have to enrich our children's lives with activities and sports. We must take our children out of the virtual world without breaking down reality and make them aware of the real world." He also noted that activities to be carried out with the family and time to be spent with friends will keep children away from such risks, adding that important tasks also fall to nongovernmental organizations (NGOs) and public institutions in this regard.

Dinç stressed that families should be aware of the negative effects of technology and the danger of addiction, and stated that parents can benefit from the information content of Addiction Training Program of Turkey (TBM) which has been realized by the Turkish Green Crescent Society in Turkey and is easily accessible via the portal.TBM, which has been prepared by experts specifically for age and target groups in the fields of cigarette, alcohol, drugs, technology addiction and healthy living, has been reaching students for quite some time. With TBM, a protective and preventive education program delivered to students by 28,000 school counselors who receive one-on-one training, students and parents receive accurate, reliable and detailed information about addictions and preventative methods.Within the scope of TMB realized in collaboration with the Ministry of National Education, 11 million students and 2 million adults were informed via training activities conducted by school counselors during the 2015-2016 academic year. The plan for the new education period is to deliver TBM to wider segments of society through schools, the related Ministries and institutions. TBM materials consisting of posters, brochures, books, presentations and videos specially prepared for each age group can be accessed on the website www.tbm.org.tr.