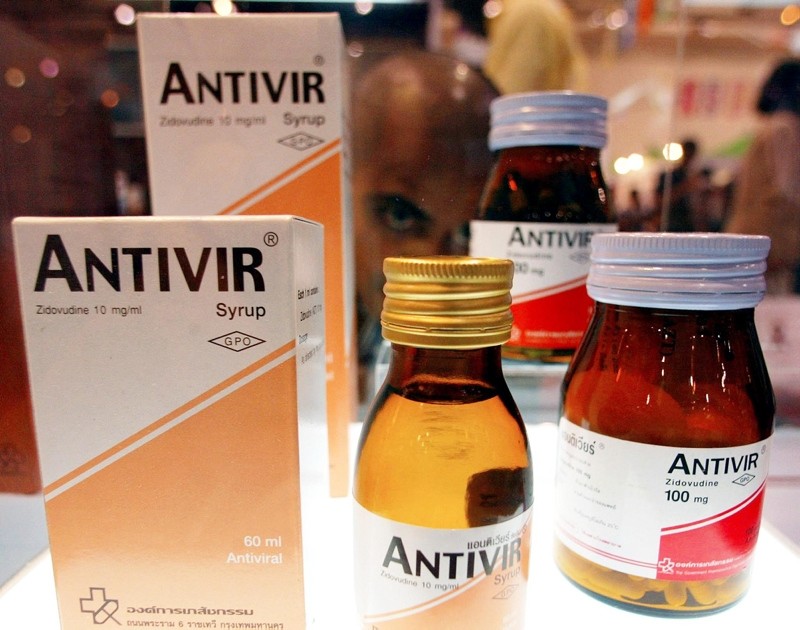 In this file photograph taken on July 15, 2004, a delegate looks at the ,Antivir, anti-virus medicine products by Thai Pharmacy Authority on display during the 15th International AIDS Conference in Bangkok. (AFP Photo)
by Compiled from Wire Services Jul 18, 2018 12:00 am

Complacency is starting to stall the fight against the global AIDS epidemic, with the pace of progress not matching what is needed, the United Nations warned on Wednesday.

The United Nations' HIV/AIDS body UNAIDS said in an update report that the fight was at a "precarious point" and while deaths were falling and treatment rates rising, rates of new HIV infections threatened to derail efforts to defeat the disease.

"The world is slipping off track. The promises made to society's most vulnerable individuals are not being kept," the report said. "There are miles to go in the journey to end the AIDS epidemic. Time is running out."

Michel Sidibe, executive director of UNAIDS, noted in the report's foreword that there had been great progress in reducing deaths from AIDS and in getting a record number of people worldwide into treatment with antiretroviral drugs.

The report said an estimated 21.7 million of the 37 million people who have the human immunodeficiency virus (HIV) that causes AIDS were on treatment in 2017, five and a half times more than a decade ago. This number is up from a mere 611,000 in the year 2000 and 2.1 million in 2005, said the report released in the run-up to the International AIDS Conference in Amsterdam next week.

There were 36.9 million people living with the immune system-attacking virus in 2017, of whom 15.2 million were not getting the drugs they need -- the lowest number since the epidemic exploded, UNAIDS reported.

This rapid and sustained increase in people getting treatment helped drive a 34 percent drop in AIDS-related deaths from 2010 to 2017.

But Sidibe also said there were now "crisis" points in preventing the spread of HIV - particularly among high-risk and vulnerable populations - and in securing sustained funding.

"The success in saving lives has not been matched with equal success in reducing new HIV infections," he said. "New HIV infections are not falling fast enough. HIV prevention services are not being provided on an adequate scale ... and are not reaching the people who need them the most."

Data in the report showed that overall among adults and children worldwide, some 1.8 million people became newly infected with HIV in 2017.

Since the start of the AIDS epidemic in the 1980s, more than 77 million people have become infected with HIV. Almost half of them - 35.4 million - have died of AIDS.

Linda-Gail Bekker, president of the International AIDS Society, said the UNAIDS report showed that the biggest barriers to ending the epidemic were "ideological and politically driven".

"AIDS is far from over," she said. "We cannot congratulate ourselves on global progress until that progress is shared by all."

The report found that at the end of 2017, $21.3 billion was available for the AIDS response in low- and middle-income countries. More than half of that came from domestic funding sources rather than international donors. UNAIDS estimates that $26.2 billion will be needed to fund the AIDS fight in 2020.

"There is a funding crisis," Sidibe said. While global AIDS resources rose in 2017, there was still a 20 percent shortfall between what is needed and what is available.

Such a shortfall will be "catastrophic" for countries that rely on international assistance to fight AIDS, Sidibe said.

"We are short $7 billion (six billion euros) per year to maintain our results and to achieve our objectives for 2020," Sidibe told AFP.

"Without these resources, there is a big risk of the epidemic rebounding, of an increase in mortality due to AIDS," he said.

Under Donald Trump, the U.S. administration -- a major funder of AIDS programs historically, has threatened to cut spending.

The U.N. goal is for 90 percent of all HIV-positive people to know their status by 2020. Of these, at least 90 percent must receive ART, and the HIV virus be suppressed in 90 percent of those.

Despite more than three decades of research, there is no cure or vaccine and HIV-positive people have to take lifelong treatment that can be expensive and have nasty side-effects.

ART inhibits the virus and can limit its spread between people -- mainly through sex -- but does not kill it.

'We haven't won yet'

UNAIDS reported large variation between world regions in the battle against the killer virus.

In the Middle East and north Africa, for example, less than a third of people with HIV have access to ARV, only 36 percent of those in eastern Europe and central Asia, and 40 percent in west and central Africa.

For west and central Europe and North America, the number is 78 percent, with about 1.7 million out of 2.2 million infected people on ARV, said UNAIDS.

In east and southern Africa -- home to 53 percent of people living with HIV in the world -- deaths declined by 42 percent from 2010 to 2017, thanks largely to the widespread rollout of treatment.

However, "there has been no reduction in AIDS-related mortality in eastern Europe and central Asia since 2010, and deaths from AIDS-related illness increased by 11 percent in the Middle East and North Africa," cautioned the report.

"Some countries continue to concern us, such as Nigeria which accounts for about half of all new infections in west Africa," said Sidibe.

In Russia, he added, the epidemic "is becoming widespread. While it was concentrated among people who inject drugs, it is affecting the general population more and more."

Sidibe blamed punitive laws, which instead of offering drug users access to clean, uninfected needles, force them underground "hiding and infecting their partners."

He also highlighted the particular vulnerability of children and teenagers.

"This is unacceptable," said Sidibe, who warned of creeping apathy and "complacency" in the fight against AIDS.

"We can win, but we haven't won yet," he said of the global battle.

Men with same-sex sexual partners are 28 times more likely to contract HIV than their heterosexual counterparts despite a radical reduction in new infections among gay men in Western countries, the report added.

Gay men and men who have sex with men remained most at risk of contracting HIV, along with female sex workers, drug users and transgender women, the Global Aids Update 2018 report noted.

Take-up of PrEP, sold commercially as Truvada, saw new infections fall by 43 percent in San Francisco in three years. The Australian state of New South Wales reported a similar drop of 35 percent over two years since its introduction.

In Britain, however, PrEP remains controversial.

Last year, following a court battle with one of Britain's leading HIV/Aids charities, the National Health Service embarked on a three-year trial of Truvada among 10,000 gay and bisexual men and men who have sex with men.

Charities and campaigners on Tuesday called for the trial numbers to be expanded.

"We are aware of one person who was turned away and subsequently became HIV positive," said Matthew Hodson, executive director of NAM, a British HIV/Aids information charity.

"What we should be doing is ensuring that anyone who is at high risk of acquiring HIV – and that includes anyone who is homosexually active – has the ability to access PrEP," he told the Thomson Reuters Foundation.

Stigma and discrimination against sexual minorities remain barriers to wider health and sex education, with transgender women 13 times more at risk of acquiring HIV than adults aged between 15 and 49.

"Human rights are universal — no one is excluded, not sex workers, gay men and other men who have sex with men, people who inject drugs, transgender people, prisoners or migrants," Sidibe said.